Mexican director-writer Emilio Fernandez bases the film on the John Steinbeck tragic fable The Pearl. Though the film is clumsy in its characterizations, the shimmering gorgeous black-and-white photography by cinematographer Gabriel Figueroa makes the film seem potent.

The Pearl opens as a baby named Juan, the son of poor Indian fisherman Quino (Pedro Armendariz) and his loving wife Juana (María Elena Marqués), is stung by a scorpion and the piggish doctor they bring him to in their remote Mexican fishing village (filmed in La Paz, Mexico), refuses treatment because the Indians have no money for payment. An Indian woman healer saves the child. Then Quino discovers a valuable unusually large pearl (probably worth thousands) when he goes deep sea diving. But as a result his life changes for the worse. It’s the couple’s hope that they can sell the pearl and this will pay for their son’s education, and he will know what they never learned. The simplistic couple have no guile to deal with the thieves who try to swindle them out their pearl. So-called friends take Quino to a bar and get him drunk so they can steal the pearl, but Juana keeps it hid. When they try and trade it to a pearl dealer, he attempts to swindle them by saying it’s only a worthless tinsel. It leads to the beleaguered couple running away from the hometown, as their valuable pearl has led to “dread, greed, death and loneliness.” The dazed couple in the end throw the pearl back in the sea, as they found the pearl has made their life unbearable. 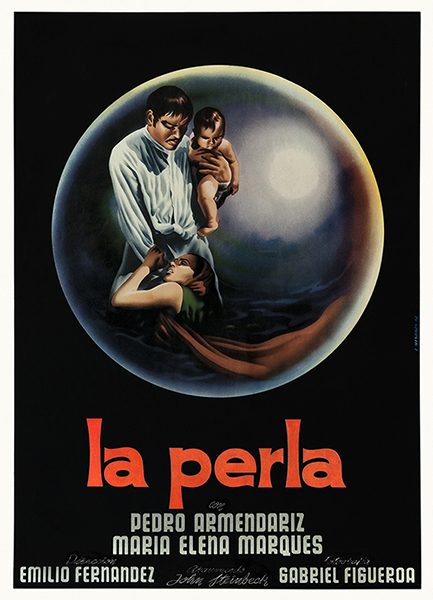