“Despite its obvious flaws, it was mildly effective in its imaginative and realistic treatment of a pre-historic lost valley.”

The Land Unknown is helmed by longtime TV director Virgil W. Vogel (“The Mole People”). It’s based on the story by Charles Palmer and is written by Laszlo Gorog and William N. Robson. Former stuntman Jock Mahoney stars and does his own stunts. Though the special effects can’t compare to those of recent sci-fi films such as Jurassic Park, nevertheless they’re reasonably convincing all things considered. The special effect gurus, Fred Knoth, Orien Ernest and Jack Kevan, had the plants growing upside down that gave it that pre-historic look and thereby created just the right atmosphere to keep things credible.

A US Navy expedition goes to explore the South Pole. Commander Harold Roberts (Jock Mahoney), a geophysicist, leads the mapping and resource search expedition. Lt. Jack Carmen (William Reynolds) is the helicopter pilot. Pretty Margaret Hathaway (Shawn Smith, the former Shirley Patterson) is the lone female among 800 men, who is an investigative reporter for a science magazine. Steve Miller (Phil Harvey) is a machinist and co-pilot. When the helicopter these four are on is forced down because of a storm into a volcanic canyon, they find themselves stuck in a steamy tropical valley that is untouched by the Ice Age, where dinosaurs such as Tyrannosaurus Rex (just a guy walking around in big inflated rubber suit, that’s too clumsily created to be frightening) from the Mesozoic era still roam.

The four try to get a rod replacement so they can return to their ship, the Northwind, and in the meantime have to ward off attacking dinosaurs, giant flying lizards, a pterodactyl and a swimming elasmosaurus. While trying to repair the helicopter and stay safe from the pre-historic animals, a human survivor appears from a long ago expedition, Dr Carl Hunter (Henry Brandon). He has turned into a madman after living alone in a cave and survives by killing off the eggs of the dinosaurs and frightening them off with a sound machine. Hunter kidnaps Maggie and offers her his survivalist skills for her companionship. The three men come to her rescue before he can bed her down, and when a little more sanity returns to the scientist he informs the men where the wreck went down. With that the men obtain the rod they need from Hunter’s helicopter and fly back to their ship, where Commander Roberts and Maggie make plans to marry and have babies.

Despite its obvious flaws, it was mildly effective in its imaginative and realistic treatment of a pre-historic lost valley. It also effectively integrated footage from The Secret Land, the 1948 documentary on the Byrd Antarctic Expedition, into the film. 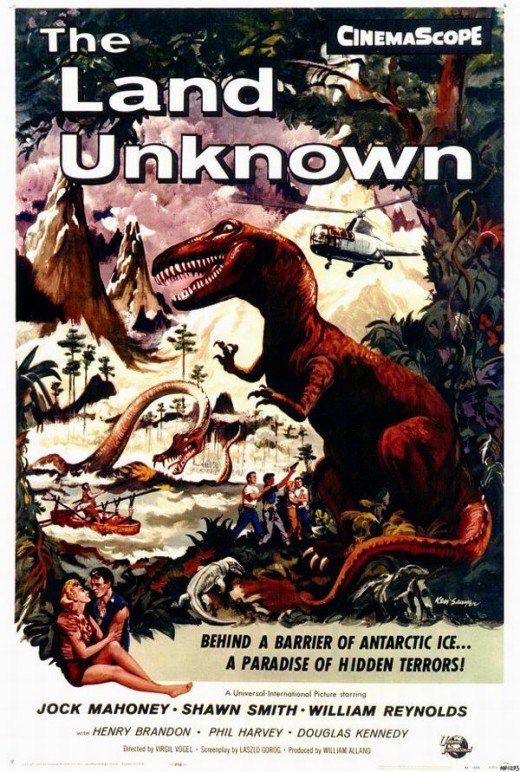