LAND OF THE PHARAOHS

“Blockbuster epics are usually not this thoughtfully put together.”

Howard Hawks (“Scarface”/”Gentlemen Prefer Blondes”/”I Was a Male War Bride”) directs at a decent and elegant pace this surprisingly intelligent sword-and-sandal epic, that is set in ancient Egypt (some 5,000 years ago) at the time of a great pharaoh, Khufu (Jack Hawkins), obsessed with building a substantial pyramid with secret passages so he can be buried in it to enter the next world with his great wealth. If that weren’t enough of a story, there’s a melodrama filled with intrigue at the palace. The film is visually spectacular in Cinemascope, has a cast of thousands to give it a tremendous effect, it’s filmed partly on location in Egypt, and it fully captures the grandeur of those imperial times. Warner’s seemed to spare no expenses. Where the film gets bogged down, is over its clunky script turned in by Harold Jack Bloom (was called in late to patch things up), William Faulkner (contributed little, was supposedly suffering from alcoholic woes and took the job only because he needed the money) and Harry Kurnitz (who wrote the bulk of it). Upon its release, the critics took a dim view of it and the public didn’t pay to see it (probably for its lack of action). It resulted in Hawks’s first commercial failure, and caused him to take a four year voluntary leave in Europe but returning rejuvenated to make the successful Rio Bravo.

After three months at war, Khufu returns to a hero’s welcome in Egypt. He’s proud of his successful campaign, where he brings back his enemy as slaves and plenty of booty. Pleased that among the Kushite slave captives is a great architect, Vashtar (James Robertson Justice), which prompts the pharaoh to make a bargain with him that if he designs the best pyramid ever and it gets built he will agree to let his people go free. But Vashtar must die in the pyramid when the pharaoh dies, that is in order to keep the passageway where the pharaoh is entombed a secret forever. The self-sacrificing Vashtar comes up with an imaginative way to seal it forever automatically to guard it against intruders and time, and looks forward to the day it will be completed and his people are no longer enslaved.

Queen Nailla (Kerima) is pleased that after six years of marriage, where the pharaoh has traveled to distant lands to fight five wars, her man will now be staying at home to supervise the building of the pyramid. She will later bear him a son, Xenon, and will even later give her life to save his from a cobra. The pharaoh is attracted to an argumentative sultry princess of Cyprus, Nellifer (Joan Collins), who offers herself to the pharaoh instead of her people paying a tribute; she becomes the despot’s favorite and his evil second wife. Not satisfied with that position, Nellifer lures the captain guard of the pyramid treasure, Treneh (Sydney Chaplin), to betray his pharaoh and help her overthrow her hubby so she can become sole ruler of Egypt as queen. But when the pharaoh is slain, she gets her come-uppance in a cleverly thought out plot device.

None of the performances sparkle, as is the want in such epics where character is never developed. Hawkins is efficient as the grim tyrant. Collins looks good in her decorative revealing costumes, but her campy performance was just dreadfully overplayed. Hawks’ discovery, Dewey Martin, is feisty as the loyal son of Vashtar. James Robertson Justice looks like Peter Ustinov, but is given little to do except say pat lines. Alexis Minotis makes a fine cunning high priest. While Luisa Boni is acceptable as the appreciative loyal slave wife of Senta. Also, Dimitri Tiomkin provides a rich brassy score that adds some spice to the colorful pageantry visuals.

Blockbuster epics are usually not this thoughtfully put together, as Hawks got caught up in the dynamics of the architecture and there’s probably a Ph.D thesis waiting to be written about the engineering feat brought about in building the great pyramid. 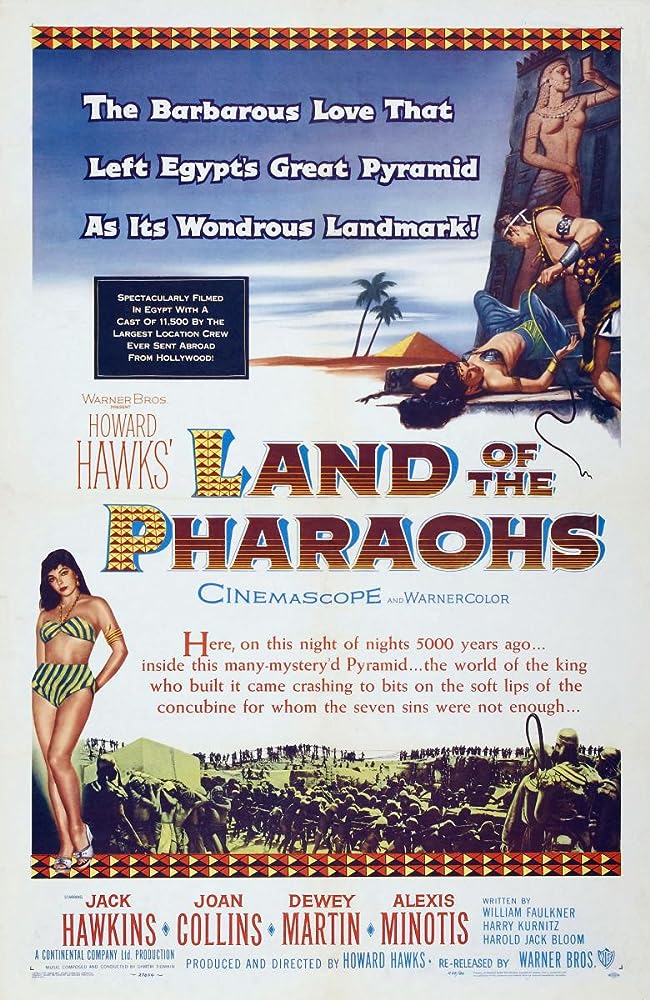