“A silly, forgettable sex comedy that is a star vehicle for Sophia Loren.”

A silly, forgettable sex comedy that is a star vehicle for Sophia Loren. It was originally made for a 150 minute film but the studio cut it to versions of 124 minutes and 109 minutes. Reportedly the cuts left the once lucid film as a mish-mash; at least producer Carlo Ponti-Sophia’s hubby-thought the unseen version was great. It’s based on the novel by Romain Gary and directed and written by actor-turned-director Peter Ustinov (“Romanoff and Juliet”/ “Hammersmith Is Out”/”Billy Budd”), who shoots on location (Paris, England and Switzerland) to give it an authentic feel but can’t keep it from lumbering along in a shapeless and sty-less manner.

During the turn of the 20th century Lady Lendale (Sophia Loren), a wealthy duchess, is celebrating her 80th birthday at her castle in Yorkshire and this gives her pause to reflect on her colorful life and rise from poverty to wealth. Lady L tells her biographer Sir Percy (Cecil Parker) that many years before, while known as Louise, she left her job as a laundress in Corsica for employment in a Paris brothel. Soon afterwards she met the one love in her life–Armand (Paul Newman), a thief and an anarchist, but instead married an English lord, Lord Lendale (David Niven). The Lord won her hand because he agreed to save Armand from arrest for attempting to assassinate the dotty Bavarian Prince Otto (Peter Ustinov) and he gave her a title and home to raise the child she’s pregnant with from Armand. The shock comes at the end, as Lady L startles Sir Percy by telling him that she continued to see Armand all those years, even using hubby’s money to finance his anarchism, and that all of her children are his; she married him in Switzerland, as Lord Lendale consented to an arrangement whereby Armand remained both her husband and lover while posing as the family chauffeur.

It was an absolute chore getting through this sloppily presented glossy period costume piece, a box-office flop. A busy Ustinov, besides his cameo role as Prince Otto, dubbed the voice of French actor Philippe Noiret. A miscast Newman gives one of his more unsatisfying performances, as only the debonair Niven seemed at home in this aristocratic setting. 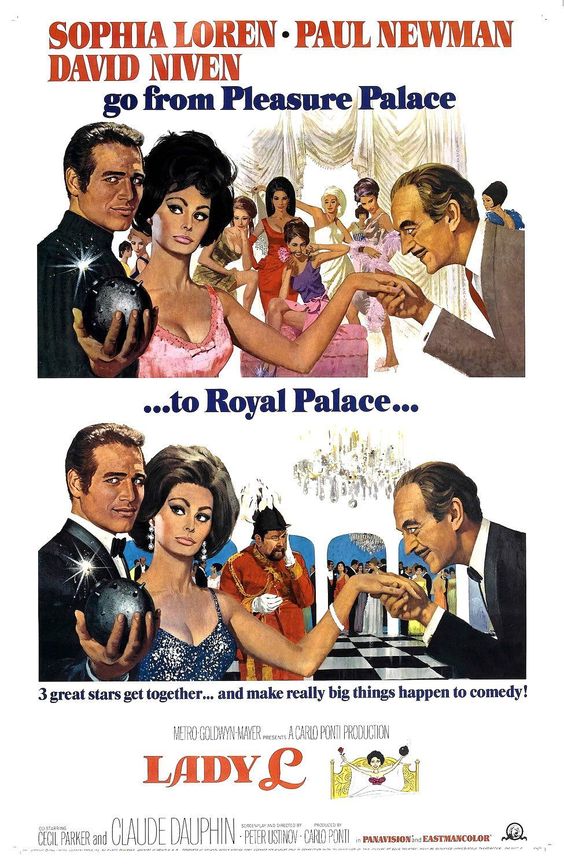