“A controversial WWII drama about the German occupation of France that has a young French Gestapo policeman romance a young Jewess.”

Louis Malle (“Au Revoir Les Enfants”/”May Fools”/”The Fire Within”) directs and cowrites with Patrick Modiano a controversial WWII drama about the German occupation of France that has a young French Gestapo policeman romance a young Jewess. This is a fictional film about collaborators, a subject that still gets under the Frenchmen’s skin. It’s set in provincial southwest France in June 1944. The title character Lucien Lacombe (Pierre Blaise) is a 17-year-old dim peasant country boy who hates his job as a nursing home orderly and can’t get work on the farm (work that he’s best suited for) where his mom is living with the landlord (Jacques Rispal), while her husband is a prisoner of war in a German camp. The rejected kid is shown as a hunter masterfully killing rabbits, wringing a chicken’s neck and for sport using a slingshot to kill a yellow warbler. Lucien gets his feelings hurt when turned down for being too young by the local teacher (Jean Bousquet) to join the Resistance. In no time flat he drifts over to the side of the Nazi occupiers by joining in the neighboring town a den of Gestapo agents and being recruited to be a policeman, after ratting out the teacher as the Underground leader. This means he can’t return to his village and is listed as Lacombe, Lucien on their death list (the reason for the film’s title). Obviously he made a bad decision since the war is almost over and it seems clear to everyone but him and a few fanatical Nazis that the Americans are surely going to win. Not particularly bothered to watch the teacher being tortured by water-boarding, Lucien acts arrogant and feels important when given a gun and an enforcer assignment working under the cunning Frenchman collaborator Jean Bernard (Stephane Bouy). If you ever wanted to know what kind of lowlife mentality it takes to become a Fascist, you have a good example in Lucien.

Lucien is taken by Jean to get his first suit in the hideaway house of Albert Horn (Holger Lowenadler), an aristocratic, sophisticated and rich Jewish Paris tailor. He is in hiding with his elderly mother (Therese Giehse) and pretty pianist daughter, France (Aurore Clément), in Lucien’s town, while waiting for the scheming and untrustworthy Jean to arrange, for a hefty price, a way of sneaking him into Spain. The brute becomes attracted to France, and over her father’s objections woos her by forcing himself into the household. The crude Lucien stays overnight with his machine gun on his shoulder and threatens to take them to the Gestapo if they don’t cooperate. The difficult relationship between the lovers manifests in an incomprehensible and disturbing love affair. It has a degraded France, who in other circumstances would never bother with such an inarticulate and brutish vulgarian, someone so obviously beneath her, cling to him only because she’s made to feel inferior for being a Jew and he’s a representative of the power structure. The bully at odd times acts clumsily sweet, as he accepts Horn as his substitute father and France as his ideal love.

Malle forces us to see the banality of evil and how even an unsophisticated patriotic boy like the apolitical Lucien, who is also not a thug or bigot, can accidentally join a Fascist group to act out his adolescent fantasies and go on an ugly power trip. We are reminded throughout the film that the kid gets irked when people talk down to him and he seems in need of finding a place to belong (his not too complicated expedient reason for joining the German occupiers). But the film goes astray in using unnecessary symbolism (for one, a telling named France) in making points that don’t need to be made with more weight since they were surely made during the unfolding of the straightforward story. What Malle can never do is convince us that the lover’s relationship was real or that someone as ignorant and cruel as Lucien could be like the mythical beast tamed by the beauty’s music, and in the end have a moral awakening where he even becomes heroic (a slap in the face to the Resistance fighters who were the real idealistic heroes). But it certainly zeroes in on the thuggish, bigoted and malevolent nature of the collaborators.

The film’s main strength is Pierre Blaise, a non-actor, who acts naturally and is able to make his loathsome character seem like a monster you can hate but also might find in your heart a little sympathy for. The second reason is that the film isn’t preachy and allows you to make up your mind what you see going down. It’s an ambitious film that’s subject to be read in different ways by those so emotionally involved with France’s tragic past; how much you like it depends on how much you think the Lucien characterization is a poignant one that represents what the filmmaker was trying to say about the power structure. 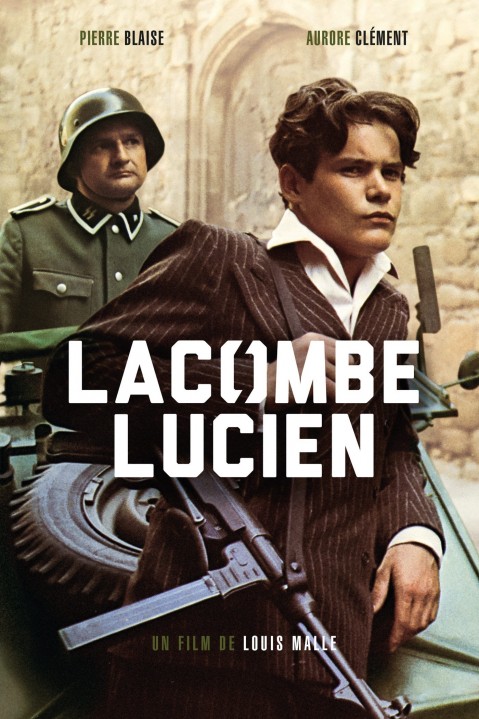