“Rivette is a quality director who has the skills and knowledge to tell such a non-action story and never allow the story to be anything but an honest intellectual effort.”

Rivette has created his own work of art in his directing of “La Belle Noiseuse” loosely adapted from a short Balzac story about art, “The Unfinished Masterpiece.” Art and life are viewed as one and the same problem. A wealthy and once successful artist, Frenhofer (Piccoli), searches for his sanity through his career’s work. He is now troubled that he can only paint a masterpiece or nothing. For the last ten years the later was the result, except for some trivial self-portraits. His wife Liz (Birkin), who modeled for his former masterpiece, is mostly concerned that something tangible has gone out of the marriage (though they are still a loving couple and are blessed with a young daughter).

Frenhofer’s art agent, Balthazar (Gilles), brings along a young struggling artist Nicolas (David) to visit the Frenhofer mansion at Languedoc. He is an ardent admirer of Frenhofer’s work and wishes to meet him. There is also the young artist’s attractive live-in girlfriend Marianne (Emmanuelle). She is someone he met when he saved her from throwing herself in front of the Metro. She writes children’s books, but does not really consider herself a writer. It is just something she does so she could be independent of Nicolas.

The two artists intellectually engage in a discussion of what art means to them. But when Nicolas and Marianne are together they try to picture themselves living in Freno’s mansion. But the place is so quiet and enormous, beyond what either is currently looking for; though, he offers no comment about what he really thinks, while she openly disdains the place.

After encouraged to visit Freno’s atelier, a place the resident artist hasn’t been to in two months, the guests view his paintings and warm up to their conversations with the host. The younger artist brashly states, “That for him, art is about taking risks, it is a bold stroke, something that stands out.” Freno declares, “That art to him is when the forest and sea submerge as one.” For Freno, “In order for the truth to come out of art, there must be blood on the canvas.”

Freno feels inspired by his guests’ visit. He is especially taken with Marianne; he sees something in her besides her lovely ass and breasts and beautiful face; and, when Balthazar suggests that he start again on his unfinished masterpiece using Marianne as a model, Nicolas agrees but without asking her for permission of the use of her body.

La Belle Noiseuse, which we are told is the title of the masterpiece the master artist is working on, is about a 17th century lady of the world who was kind of nutty in the sense that she was difficult to figure out. She is referred to as being someone who is a “ball-buster.”

With Freno back at work, the air is filled with tension. Under Rivette’s masterful direction, what happens is what you might expect to happen but not in the way you expected it to happen. The result being a fascinating look at how an artist tries to get at the essence of what he is doing, struggling with his passions and his intellect. Those around him become in one way or another part of his work. He incorporates their jealousies, sexuality, and life ambitions onto his canvas over the three day period he works with the nude model.

Every character has a part to play in the dynamics of the artist’s creation, as he struggles to relate with his recalcitrant (she is steamed at Nicolas for not consulting her, saying “you sold my arse”) and difficult model (this mansion reminds her of boarding school where she was sick all the time, until they eventually kicked her out of the school). Freno finds that he must use his wits to get her to do what he wants her to do, because she is determined to be who she is; that is, until she becomes hypnotized under the artist’s careful scrutiny and finds it impossible to wear the same mask in life she has previously worn. The new question becomes, who is she now?

What makes for a captivating depiction of an artist at work are scenes such as these, where one’s sense of time is lost in a world of art. But the length of the picture (it is 240 minutes) does not seem too long. We become part of the creative process starting from scratch and actually are hearing the artist’s scratching sounds on the canvas for minutes at a time with no action on the screen. We just watch Freno at work and watch him manipulate the model into the pose he wants, even when Marianne complains that he is hurting her.

That the truth is cruel might have seemed like bullshit to Marianne when Freno first said it. But, now that Marianne is getting a grip on herself, she is no longer scared of facing herself and what is going on with her relationships–that is, with Nicolas and the strange attraction she has for the much older artist who is in his sixties.

The girl-to-girl talks with Liz do not seem to do anything for Marianne. Marianne is just curious how Liz met the artist. And when told they met in a cafe and that he fell for her first before painting her, seemed to satisfy her curiosity. But Marianne showed no interest in ever becoming her friend. Liz, on the other hand, is aware of what her husband is like. She knows he will behave properly with the model while working with her, but after that she realizes there is a danger that sparks could fly between them. She thinks he is looking for something in the model’s beauty that he can no longer find in her; and, that’s what is upsetting to her. She tries to play the role of supporter to her husband by making sure Marianne feels reassured to continue modeling; yet, she is guarded that something could go wrong that might upset her own relationship with Freno.

Marianne tells Freno that she is through with Nicolas, even though he is the only man she can live with. But she must move on. Nicolas is consumed with jealousy admitting that it is he who needs Marianne now, not the reverse like when they first met. He wants her to stop modeling and return with him to Paris. She not only refuses, but she takes a guest room in the Frenhofer’s leaving him alone in the inn they were staying at.

Frenhofer is stuck. He is filled with self-doubt if he can ever paint again. He says, “You get stuck in what you are searching for—you get possessed by it.” But he explains, “It is fear that makes him paint, for him painting becomes a tactile experience whereby his fingers are led unconsciously.”

Marianne asks him, “Why ‘me’ naked in front of you, why not Liz ?” She goes on to say, “I need to understand this.” It seems the situation has reached a point of no return. Every character is now playing out their emotional trump cards. The artists are struggling with what is not clear inside themselves, as their wounds are opened and their vulnerabilities are exposed.

Liz tells her husband, “You are sad because you are no longer young, 10 years is a long time to stop painting. You will only destroy what happened before you start over.” There is a hint of a possible affair that might have taken place between Balthazar and her ten years ago, that seems to be the cause of the tension we feel among the three.

In contrast to Freno, Nicolas can’t stand the solitude, he is afraid to be alone with himself. When left alone, Nicolas takes comfort in the company of his sister (Denicourt) who joins him at the inn.

Liz says, “for Freno, it is the capturing of a whole life in a painting—it is that thing that makes art shameless, that is what matters to him. It is as if one can see one’s whole life passing in a flash, like it might be for a person drowning.”

While discussing their relationship Nicolas states to Frenhofer, “the only enemy of an artist is a bad painting.” He gets his digs in by insulting the artist’s lifestyle as comical. So the camaraderie between the two artists seems to be genuinely plausible, in the sense that they do understand each other as far as their work goes. With Freno being self-assuredly in control of his life, he is able to patronizingly say to Nicolas as he departs “I like you, don’t ever change.”

The last shot is with the agent, talking numbers with Frenhofer, deciding how much they will get for the piece of crap art he has seen. The art piece Freno buried in the wall is the real masterpiece, it is kept where only his child can find it. For Freno, his art has become a passion to find the truth within himself…and that is all that matters to this wily artist.

The acting is exceptionally good by everyone. Piccoli’s performance is mesmerizing, while Emmanuelle is both beautiful and intelligent. As for the drawings, they were done by Bernard Dufour, but they don’t seem to be anything special.

Rivette is a quality director who has the skills and knowledge to tell such a non-action story and never allow the story to be anything but an honest intellectual effort. 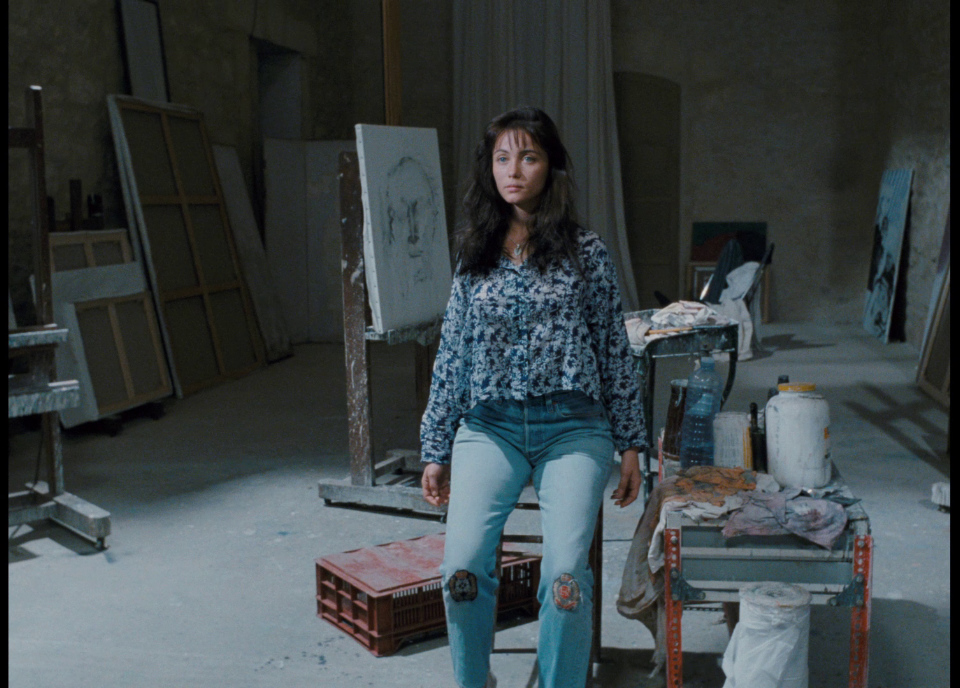