“It’s a vibrant and unsettling work of great emotional power for the human condition.”

An avant-garde theatre group production inspired by the German Expressionist classic The Cabinet of Dr. Caligari (1920). The stylish legendary silent is based on the short story by Yasunari Kawabata and is directed by one-time kabuki female impersonator KinugasaTeinosuke Kinugasa (“Gate of Hell”/”Hibana”). It’s co-written by the director, Minoru Inuzuka, and Banko Sawada. The low-budget film had some of the well-known cast work extra on the sets for gratis. The lost film when found in the director’s storeroom and was restored in 1971, but without subtitles. An elderly former sailor (Masuo Inoue) is filled with guilt that he abandoned his wife (Yoshie Nakagawa) and daughter (Ayako Iijima) earlier on when his wife attempted to drown their infant son. To make up for it, he volunteers to work as a janitor in the insane asylum his wife is confined. He hopes to free her. It’s a vibrant and unsettling work of great emotional power for the human condition. 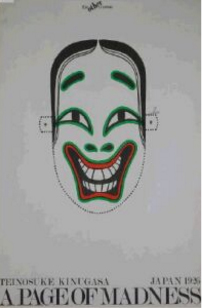