“Educational film about an 11th-century Tibetan book of medicine.”

A straightforward no-frills educational film about an 11th-century Tibetan book of medicine called “Gyuschi,” translated as The Knowledge of Healing. The book is found in the Buddhist Tantras (scriptures). The no-nonsense documentary is directed by Swiss filmmaker Franz Reichle (“Lynx”) and features the Dalai Lama and his personal physician Tenzin Choedrak, both of whom are interviewed from their home in exile in the foothills of northern India’s Dharamsala. The gentle physician explains his brand of holistic medicine as simply as he can (unfortunately it’s still too complex for most viewers) and is also shown in action treating patients. The documentary is overloaded with useful medical information, which makes this film valuable for those viewers interested in exploring the alternative to Western medicine approach taken by the Tibetans. The dry informative film would be an invaluable source to colleges and libraries, but would be worthless to those viewers with no interest in the subject-matter.

The Knowledge of Healing observes the old-fashioned preparation of Tibetan medicines, that include herbs not used in the West like the so-called “jewel pills” and a Padme 28 flower concoction that can prevent heart attacks and cleanse the blood system to prevent amputations. The film’s most personal moment has a tortured by the Chinese for her activist protests, Tibetan nun, gently treated for her head injuries by the sympatheticTenzin Choedrak. He tearfully exclaims “that she suffered not just personally but for all of Tibet, and that the truth will come out in the end.” Using interviews with medical people in eastern Siberia, Austria, Israel and Switzerland, the film points out that you don’t have to be Buddhist to be treated by the Tibetan medicines. The film convincingly shows this alternative treatment travels well across the globe. The Dalai Lama says Tibetan healing should be further studied by the West to reinforce their own medical practices. 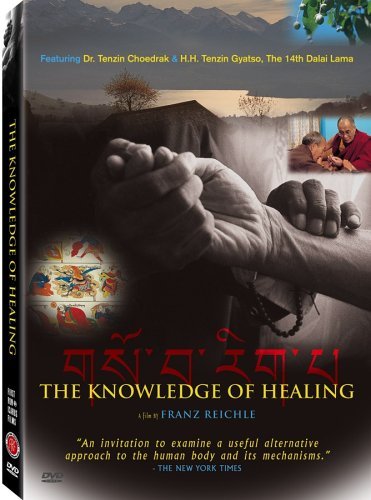