“Poor excuse for an unconventional biopic.”

Prolific Chilean exile Raúl Ruiz (“Shattered Image”/”The Golden Boat”/”Time Regained”) helms this poor excuse for an unconventional biopic. It serves best as an idiosyncratic poetic meditation on Austrian artist Gustav Klimt (John Malkovich), one of the founders of the Vienna Secession art movement, best known for The Kiss (interestingly, his most famous painting wasn’t shown), who was born in 1862 and died of pneumonia after having a stroke in 1918. It’s an opulent, atmospheric arthouse fantasy on the decadent Austrian Symbolist painter. But it’s so tedious that I ended up not giving a darn about the great eccentric artist and why he was so admired and controversial. The artist known for his signature gold-leaf paintings and for leading a colorful but decadent life, is depicted from his hospital deathbed in the Vienna of 1918, where he’s visited by his giggling protégé, the artist Egon Schiele (Nikolai Kinski, Klaus’s son).

Klimt’s life story is told in flashback, as he relates his feverish visions from his deathbed through his addled brain that suffers from syphilis. He speculates about attending the World Exhibition in Paris of 1900 to receive a Gold Medal for his work “Philosophy” and meeting with film pioneer Georges Méliès (a meeting that historically never happened), his aesthetic debate among Austria’s academicians, his tossing of a cake in a detractor’s kisser, his reflections on his brood of bastard children (supposedly he sired 30 children), his foul-mouthed disposition, his many torrid affairs, his association with prostitutes, his alluring muse and possible lover-the mysterious dancer-Lea de Castro (Saffron Burrows), his struggles for artistic freedom and his odd relationship with his inner circle of friends. In between, it touches on some of his paintings, as if they were afterthoughts, and it follows throughout a shadowy puritanical character addressed as the Secretary (Stephen Dillane), who rejects all his paintings for government sponsorship and states near the film’s end that “too little beauty is preferable to too much.”

It’s a formless film that looks stunning but is mostly kitsch and is as empty as an ornament, with Malkovich’s starchy affected characterization of the artist as an arrogant asshole is hardly a satisfying or memorable one. The version I saw was the producer’s 97-minute cut, which lopped 30-minutes of the director’s cut. I had enough of the shorter version, I don’t think I could stand being bored for another 30-minutes. 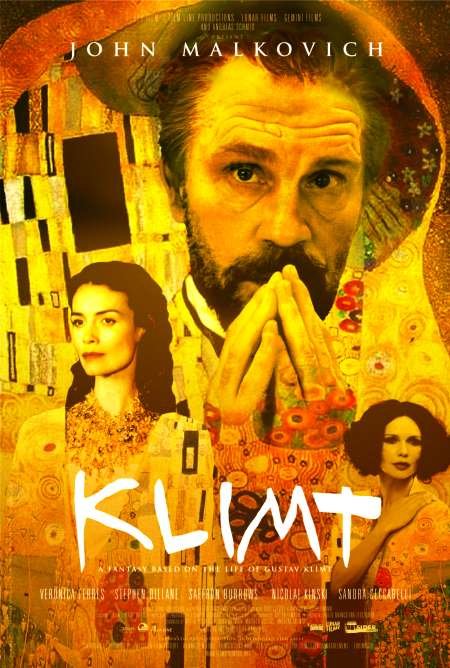