“What makes this film standout, is that the subject matter is necrophilia.”

This is a film where the heroine could say with deep conviction that “I’ve seen bodies shining like stars,” and we believe her without laughing. It’s an unusual and fascinatingly compelling fairy tale type of drama, steeped in feeling and intellect and romance. “Kissed” is based on the original story by Barbara Gowdy “We So Seldom Look on Love,” and directed with economy in her first feature by Canadian Lynne Stopkewich. She has captured the nuances of a young girl’s life obsession, her ambitions, and her romantic life, in a most tender and imaginative way. What makes this film standout, is that the subject matter is necrophilia. It tells about a young girl, Sandra Larson (Molly Parker), who grew up in isolation showing an abnormal interest in dead animals, where she feels compelled to hold them in death and bury them properly. She breaks her isolation when she meets one other friend, Carol (Jessie Winter Mudie), who understands her secret life. But when Sandra’s mother learns of how Carol sees ghosts and has her daughter do a strange dance at the burial of the animals, she breaks up the relationship for good.

As a college student Sandra decides to study embalming, and as a result she quits her job for a florist and secures a job at Wallis’ funeral parlor. From Mr. Wallis (Brazeau) she learns the trade, as he methodically shows her how to apply the techniques that go into preparing the dead and making them look serene for the family members to view. For Wallis, the dead have no feelings. He’s just someone with an unusual occupation who is good at his job. But the janitor Jan tells Sandra that Wallis has a secret, he was once caught fondling a young boy corpse. This is never followed up.

But for Sandra, the dead bodies are a means of transcendence … it’s about ‘crossing over.’ She tells how she feels compelled to make love to the dead young corpses. With a spiritual light in her eyes, Sandra expounds in a delicate voice how every corpse is different, how each has its own innocence, grief, and wisdom. She can feel everything from the dead body, “It’s like looking into the sun and going blind.”

This sincere and believable young lady’s life becomes even more complex when she meets a medical student on a leave of absence, Matt (Outerbridge), and makes love with a live person for the first time. She feels comfortable enough with him, that she blurts out her secret: “I make love to the dead bodies.” Instead of turning her off, this driven man becomes more curious about her and her romances with the corpses.

But Matt feels that he can’t compete with the corpses for her undying love and offers to pretend to be a corpse, wearing makeup and lying still, if she would make love to him the same way she does the corpses. When she tries to tell him that what she does is not an act and refuses to indulge his fantasy, the film turns away from her story to its detriment, and follows Matt’s need to be loved. It culminates in a tragic event. But her story is more dynamic and compelling than his. We have seen troubled students like him in other films, but she’s unique and mysterious and worth pursuing in further depth.

One of the really amazing things is that it’s all believable. The odd situation is handled in a romantic and even comical way, allowing us to see the characters for what they are instead of sensationalizing their fetishes. There were three very good performances: Jay Brazeau sets a sobering tone for the story to be grounded in reality, no matter how far-fetched it may seem. Peter Outerbridge brings a sensitivity and restlessness to his role, as someone whose curiosity is so great that he’s willing to try something that is ghoulish. But the film belongs to Molly Parker’s absorbing translation of her role as an ordinary person who is compelled to do what she feels most pressing inside her. The photography, at times, becomes glowing in a heavenly whiteness or darkly pressing in a sobering blue shade. Kissed always felt dreamlike, like it was a fairy tale but without a moral lesson to it.

The novel film’s only fault is in how slight the story is and how it failed to go beyond the shocking taboo point of its “crossing over” theme and really explore that untested subject matter in more depth. 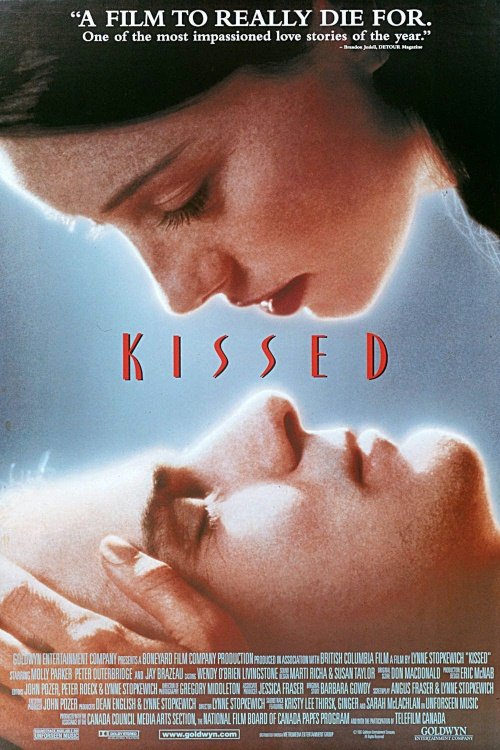