KING OF MASKS, THE (BIAN LIAN)

“The story centers around an elderly street performer who is a fast changer of silk masks.”

Set in the 1930s, in the rural province of China called Sichuan. That was a time of great poverty and unrest and this film serves as a humanistic response to that age of intolerance and greed, though the film does not make any direct political statements. The director Wu Tianming was one of the founders of ‘fifth generation’ directors and left China after the Tiananmen Square uprising, only to return in 1995. This is his first film in ten years and it is sponsored by the Chinese government. One of its chief faults is that the film used bad film stock, as it seemed out of focus and grainy. On the positive side, it is a colorful and heart-tugging though highly manipulative melodrama filled with obvious reactions against injustices, whose voice is always on the side of the artist and those who are disenfranchised in society.

The story centers around an elderly street performer who is a fast changer of silk masks. He has no male heir and according to the ancient customs, he can only pass the art onto a male.

Bian Lian Wang (Zhu Xu), the King of Masks, is a crowd favorite among those in the streets. He makes his money on donations. Seeing him perform his speedy changing faces, is a much idolized opera singer of the time, Liang Sao Lang (Zhao Zhigang), who is a female impersonator. He/She shows such tremendous admiration for the King’s gifts that he asks to learn the old man’s tricks, which he is willing to pay him a huge sum for and put him in his more prestigious show. The poverty-stricken Old Master turns him down while expressing great appreciation for the offer, but maintains his artistic secrets can only be passed onto a male heir. What he takes to heart, is the impersonator’s plea for him to find a male heir.

In the next town there are floods and personal misfortune, and the Old Master bargains with an unscrupulous man in the black market and pays $5 for what he is told is a boy. The lonely man, who lost his only son many years ago, is moved by hearing himself called grandpa and agrees to the price even though it is too high for him.

The girl named Doggie (Zhou Ren-ying) will do everything that she can to try and please grandpa, but he resists teaching his gifts when he learns that his son is really a girl. Still he is the only one who has showed her any kindness in her short life and she offers to call him boss and work as a cook and cleaner for him, rather than have him kick her out of his river boathouse. He reluctantly agrees to this arrangement, and as they live together he can’t help feeling strongly about her but he just can’t show it. When she causes him much grief and leaves his place, she tries to make things right by taking a kidnapped boy to him. This will result in him being framed as the kidnapper by the venal police.

The film becomes predictable. They are both shaped by their experiences of the hard-times they live in and by the traditions. She is a good-hearted girl and a real sweetie pie, while he could be a very generous person but someone who still can’t get over his stubbornness. As a result when the film’s last act rolls around, what happens all feels contrived. I felt manipulated, especially when I saw that the sweet little girl is even willing to die for her grandpa. One would have to have a heart of stone not to be moved by her actions of self-sacrifice. Though the viewer is shamelessly manipulated by the story it, nevertheless, feels so strong and right, that it seems easy to get caught up in the emotions of the moment and the beautifully arranged images that lit the screen up with magical faces and gorgeous sets and costumes. And, if the girl wasn’t a charmer enough, and the Old Master and opera singer didn’t have expressive enough gestures to steal the scenes they were in, there is the Old Master’s monkey to even steal scenes from them. The monkey repays the Old Master for his kindness by remaining completely devoted, even after his master is framed and jailed for kidnapping a young boy. The film got ever so mushy, but it was so cleverly executed that I was gladly taken in by Zhou Ren-ying and Zhu Xu pulling on my heartstrings. 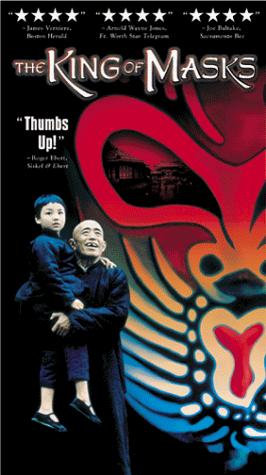