KING OF KINGS, THE

“The recounting of the Gospels according to De Mille seems awkward, tedious and hokey.”

Jewish groups criticized Cecil B. De Mille’s (” The Greatest Show on Earth”/”Samson and Delilah”/”The Plainsman”) Jesus film because they said it condemned them as Christ’s crucifiers. De Mille softened the blow by having the High Priest Caiaphas (Rudolph Schildkraut, Yiddish actor), after Jesus is crucified during an earthquake, run into the temple and fall on his knees declaring: “Lord God Jehovah, visit not Thy wrath on Thy people Israel—I alone am guilty!” Mel Gibson should have learned something from De Mille, as his interpretation of the Crucifixion is like De Mille’s subjective and highly suspicious; but unlike De Mille’s more benign and tasteful look at the final days of Jesus that glorifies his Man in a reverential tone by offering a laundry list of his miracles, Mel’s is bent on being anti-Semitic, unapologetic in its hatred of other religions and filled with gore. Mel’s version is a call to the old days of blaming the Jews for Christ’s death and is not interested like De Mille in being more ecumenical and tolerant of others.

De Mille considered this lavish silent screen epic, a follow-up version to his silent The Ten Commandments, as the most important film he ever made. It mixes sex and religion, as De Mille is always the showman storyteller who makes the redemption of Mary Magdalene (Jacqueline Logan), a high priced courtesan and possible lover of Jesus into a vamp wearing a revealing jewel-studded bra (the suggestive affair between Mary and J.C. is strictly De Mille’s) until she’s drained of her lustful sexual urges as she becomes a believer in Jesus as the Son of God. The episodic film has the Carpenter of Nazareth healing a blind boy, raising Lazarus, driving the moneychangers from the temple, saving an adulterous woman from a stoning, holding a Last Supper at Passover for his disciples, being betrayed by Judas (Joseph Schildkraut), tried before the Roman governor Pilate, led to the Cross of Calvary by Simon, the Crucifixion, the Resurrection, and the Ascension.

The recounting of the Gospels according to De Mille seems awkward, tedious and hokey. It’s more a propaganda piece than a religious one. It has a simplistic notion of God and makes Jesus (H.B. Warner) out to be too stiff and moralistic to be taken seriously as Jesus, and it seemed more as spectacle and rehashing old saws (its inter-titles are quotes from scripture) more than getting to anything sublime. It also has a few ridiculous moments in its snazzy hoopla production (zebra races, an orgy and a cast of thousands). But the film was a box office smash and was seen by as many as 8 billion people all over the world and set the tone for many years on how Hollywood should make a religious film that is entertaining, inoffensive and popular.

The film was remade in 1961 by director Nicholas Ray, with Jeffrey Hunter as Jesus. 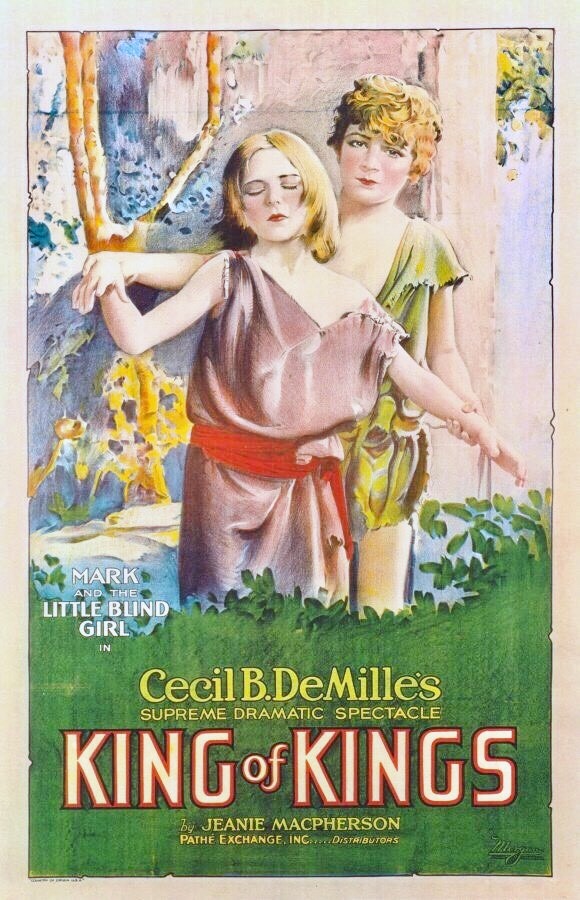