KING IS ALIVE, THE

“Admittedly not for all tastes, but I liked what I bit into even if there was some sand in the offering.”

Danish director Kristian Levring has signed the Dogme 95 contract to abide by their gimmicky set of rules in this curious dramatic piece which seems to chortle to itself on its concern about reviving the lost art of storytelling. Though it never feels quite honest no matter how hard it tries to give off such a genuine look, it nevertheless makes the most out of nothing and becomes more than an exercise in acting–it becomes an exercise also in storytelling. The key word is exercise, as the film always feels like a dissertation on nihilism. But I don’t mean that in a necessarily negative way. It might smack of being like many other survivor stories, yet it offers intangible rewards if you can bear with it and not die of thirst before the film reaches its watering hole. Levring takes an old chestnut of a story about a group of people stranded in the middle of nowhere with little chance of surviving and aims to breathe fire into their situation by showing how each responds to peril and schemes against one another. He wins no points for originality in theme, as he points out that people can be either shitty or heroic in such times–hardly startling. But there’s more to this film than that; such as, in the inexplicable calm and fright that pervades in the eerie stillness of the desert scenario and the film’s tensely set pace which ignites some magical sparks among the stranded tourists as hopes rise and fall as seen in their emotional states. The beauty in the film is in the look of the desert and its unwieldy undulating dunes as shot on digital video by Jens Schlosser with his handheld camera and in how Shakespeare’s play King Lear takes on a reality of its own for non actors who need words to say that are better than their own, while the ugliness in the film is that most of the characters are dullards and have nothing meaningful to say when not speaking Shakespearean.

A black African bus driver, Moses (Vusi Kunene), and ten assorted white passengers from different countries, find themselves lost in the Namibian desert when the road compass the driver was following proves to have been broken. They futilely drive 500-miles in the wrong direction and land in an old abandoned German mining town in search of gas but only find kerosene. The only person there is an old black African recluse, Kanana (Kubheka), who at times is mumbling odd things to himself or silently sitting in the Buddhalike lotus meditation position as if he were either crazy or a wise man. I’d bet on the former. Kanana in a voice-over tries to tell the viewer what he saw in the desert when the travelers arrived, as a madman for a narrator is fitting for such a tale.

The miffed marooned passengers argue among themselves and seem disorientated and one of the more hostile men, the brutish Brit Paul (Chris Walker), takes out his anger on the bus driver for getting them lost. But a leader named Jack (Miles Anderson) emerges, who fits the description of those safari hunter or soldier of fortune types. The Aussie assuredly takes charge of things and gives them a plan of five things to follow that is necessary for their survival. They are to collect their water supply from the night dew on the roof. They are to eat from the supply of cans of carrots left in the mine that are not dented or spoiled. For shelter from the evening cold, they are to move into the abandoned shacks and repair them. To alert planes who might fly overhead, they are to keep a signal fire going all night and during the day use the bus mirror as a signal when the sun strikes it. After 5 days they are to burn the bus tires, which will give off a very visible black smoke. And, lastly, they are to keep up their spirits by remaining positive. Meanwhile Jack will try to walk to the nearest village for help, which is 150-miles away.

Left on their own, hostility and in-fighting become the norm. The Western tourists are made up of a young British and a middle-aged American couple who are both unhappily married, two young French and American attractive opposite types of single women, and three diverse older men. The middle-aged American couple of Ray (Bruce Daison) and Liz (Janet McTeer) are stuck on each other despite the misgivings they have. He is possessed with a faraway dazed look while his busty, shrewish bitch of a wife wickedly tempts him with her full figure and bitterly tries to upset him by throwing herself at the other men and ordering him around. The loudmouth and overweight Paul can be irksome to his sensitive but insecure and withdrawn wife Amanda (Lia Williams), who married him knowing he wasn’t what she wanted but foolishly hoped she could still find a peaceful life with him. He loves her so much as a trophy wife after a lifetime of hanging out in pubs and never meeting the right woman, that he’s willing to change his piggish ways for her as he shaves his head after an ugly incident to show her he means business. Gina is a shallow, swinging American chick with a Walkman playing loudly in her ear and who perks up when she does her sex tease act while dancing in a hot way to tempt the older men. Catherine (Romane Bohringer) is an intelligent but twisted French chick who likes to tell fairy-tale stories and make fun of people when they can’t understand what she’s saying. Ashley (Brion James) is an acutely nervous businessman who nearly has a breakdown when he realizes he won’t get back in time for some important business meetings. He will be recruited later on to play the role of King Lear, and will fall sick from possible dysentery but manage to live (which might be how this hipster film got its title). The 60ish Brit Charles (David Calder) is a mean-spirited, pompous, burly and ingratiating man, who insults everyone he can and thinks he’s superior to the others. He also foolishly thinks he’s in great shape. He has the hots for Gina and is possessed with a self-deluding arrogance, so much so that he thinks that he’s in shape not only for sex but for love. The sex scene between the red-faced blustery Charles and Gina playing the role of the manipulative sexpot, resulted in a very cruel humiliation and put-down of him. Her telling Charles off was perhaps even more cruel than Liz seducing the bus driver in front of her husband and causing the tormented Ray to run off like a raving fool in the wilderness. The most humane and intellectual one among this bad lot, the alter ego for the filmmaker, is the former Shakespearean actor Henry (David Bradley). He has memorized “King Lear” and in order to fight boredom and help distract the hostile survivors from what they fear, he persuades them to perform the play in the desert. Henry is unconcerned that no one can act and that some have never heard of the play or know what it’s about (reflective of the attitude the director has to his audience). But Henry also has a cruel streak in him, as he doesn’t mind watching in a detached way the terrible occurrence. His only comment comes over a wickedly playful snicker: “Is man no more than this?”

Ray is confused not only about his wife and what to do about his uncontrollable lust for her, but about what this play is about. Liz explains it as a play about a retiring king who wants to give the greatest share of his wealth to the daughter who loves him most. Chosen to play Goneril, she proceeds to bitingly tell her quizzical husband about the play’s more profane meaning: “Nobody falls in love. And everybody dies in the end.”

Love and mind-games are thrown around in the stagelike desert like sand is in a playground full of brats. A suspicious Catherine rejects a role in the play because she suspects Henry of being a dirty old man who wants to get her young ass, yet she becomes extremely jealous when her attractive young rival, Gina, gets to play the juicy role of Cordelia. In one amusing and informative scene, Henry bemusedly tells Catherine that the term of role for an actor’s part came about in the days when each player was given the script in a roll. Henry is busy writing everyone’s part on a roll of toilet paper.

As the play becomes central to the story and the characters get diverted by their own jealousies and travails despite the dire situation they are in, Levring sagely doesn’t force the obvious parallels of their situation with Lear. Excellent performances from the international cast rule the day making it interesting to watch despite its many drawbacks and the possibility that all its calculations could be taken as merely being a literary pretense, even if that’s not the case. The many close-ups of the actors reveal the film is always busy trying to make something out of nothing. The stranded travelers are madly lost in the wilderness, and have lost track of their way to the goodness of their hearts. They have become blinded by their own in-sensitivities and ignorance, as they wail around in the desert and even movingly get to perform the play in parts while under duress. Humanity has lost its essence among all of them, but for Henry. As the play becomes the only thing left for them that calls attention for the need of civilization and culture, that it might also be the only thing that can keep them sane.

What the film provided in a big way, was that it cooked the old plotline ingredients in a different style and made it taste fresh. Levring’s work tuned into something oddly curious about following any group of people caught in a bad situation, as one wonders how well one’s humanity will hold up throughout the ordeal when pushed to the extreme. There was something fascinating about this film that reveled in matters that were both familiar and strange. The sweeping desert became a stage for the mirror image of the gigantic figure of Lear to appear again as a noble man who fell because he was blinded by forces beyond his control, perhaps, not unlike the castaways. “The King is Alive” never got stuck where it might have in its contrivances, and in its unconventional attitude it brings something not easily forgettable to both a familiar plotline and one of the world’s most noteworthy and dissecting plays about humanity. Admittedly not for all tastes, but I liked what I bit into even if there was some sand in the offering. 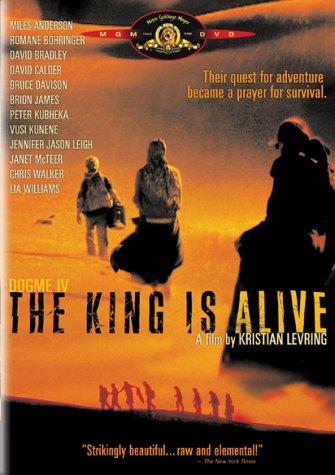