“It’s a competently made fairy-tale film, but it’s the kind of film perhaps any good director could have madeand did not need a great one.”

Master Indian filmmaker Satyajit Ray(“Sadgati”/”The Chess Players”/”The Golden Fortress“) has written the story and directs with vigor this sequel to the Adventures of Goopy and Bagha film, which was also made for TV in India.It’s anappealingchildren’s film told with bouncy music and lush visuals, and is about an evil king being overthrown by the subjects he oppressed.

Bagha (Robi Ghosh) and Goopy (Tapen Chattopadhyay) are the fun-loving son-in-laws of the good king of Shundi (Santash Dutta), and have acquired from him magical powers, exercised through their singing and magical shoes (they can become invisible and go anywhere, even through walls). After ten years in the kingdom, the two are restless and the King sends them on an official state visit to a faraway region of diamond mines, whose wealthy ruler is known as The Diamond King, Hirak Raja (Utpal Dutt). Because of his PR, the outside world doesn’t know he’s a tyrant.

On their journey the singing duo encounter the region’s idealistic school teacher, Udayan (Soumitra Chatterji), hiding in a cave, and are told by him that the despot king has made everyone a slave to his wishes and that his magician (Santash Dutta, in a dual role) used a machine he invented to brainwash those revolting by making them submit to authority by now praising the king for his kindness and calling him a God. Hirak has also closed the only school, fearful that those educated would never accept his cruel rule. The teacher fears if he’s caught by the king’s obedient and ruthless army, he will also be brainwashed. The three team up. Goopy and Bagha are aided by their magical powers and sing for the King, while the inspiring and brave Udayan leads a successful revolution of the people, the miners, laborers, farmers and school children. After their brainwashing is ended and they are returned to normal, the people dethrone the king and also alter the behavior of the king’s parasitic ‘yes man’ cabinet of advisers. It ends with the entire region, including Hirak, pulling down by rope the king’s giant statue at the mines.

It’s a competently made fairy-tale film, but it’s the kind of film perhaps any good director could have made and did not need a great one. It should be noted that Ray wrote most of the songs sung by Bagha and Goopy, who energetically play the lyre while singing and dancing.

The pic, even though not a masterpiece, was one of Ray’s biggest commercial hits. 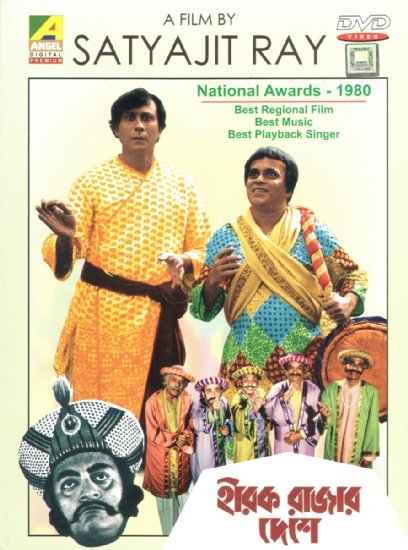