“It’s rare that a woman directs a noir film and especially one as hard-boiled as this one.”

It’s rare that a woman directs a noir film and especially one as hard-boiled as this one. Maggie Greenwald (The Ballad of Little Jo), in the tradition of Ida Lupino, directs this independent low-budget post-modern noir film by using dark shades of Technicolor as her auteur signature. She paints a nasty picture of a downtrodden East Coast resort town of losers. The film decides to go without a main protagonist; it tells the story of what’s eating away at a group of citizens it meshes together, enough for murder to result. It is based on a book by the late pulp novelist Jim Thompson, whose Grifters was successfully made into a noir film. The theme of the film could easily be: ‘misery loves company.’

Luanne (Gross) is the middle-aged town gossip, the most detested person in town, who has an acid-tongue and is not adverse to dropping bombshells on any of the town’s citizens. She is a pitiful woman, who remains bedridden. Her doctor refuses to treat her anymore, saying there is nothing wrong. She married a dimwit and a much younger man when she was 35-years-old, the 18-year-old Ralph (Monroe). He stays with her because she manages his life and lets him fool around with other women as long as he tells her about it. He works as a handyman for one of the resort places and as a janitor in the Pavillion bar.

Ms. Greenwald’s penchant for long close-ups of her disgruntled players, creates a noir-like feel. She also adds strength to the noir-style, by having the dialogue stripped to the bare minimum. The movie opens with the abrasive Luanne on the phone spreading the dirt about the middle-aged Lily Williams (Kelly), who has lived alone with her brother for a number of years and now is pregnant by him. Luanne claims that what she says is always true and that she does it because the town treated her so badly when she married Ralph, that she is only giving them a dose of their own medicine. Lily commits suicide, since she was unable to stop Luanne from talking to others on the phone about her and apparently couldn’t face the music for her actions.

The film has a downbeat mood.

The bar owner, Pete (Jackson Sims), wonders why there is no one in his bar when it was once a hot spot. His bartender, the disconsolate Rags (Russell), who came to this town after his family died in an accidental fire which he set when he was drunk (which is information only Luanne knows about), advises Pete to get girl strippers in the place to draw in the off-season crowd. Pete will find a prostitute in the street, Danny Lee (Haase), and make her the club’s stripper. But she lacks the confidence to believe that she will be able to do a good job as a stripper and needs constant encouragement.

Pete’s other pressing problem is his daughter Myra (Fox), who is seeing on the sly Dr. Ashton’s good-for-nothing son, Bobby (Barrett). He is supplying her heroin and as heard through Luanne’s gossip, has also been dealing hard-drugs in his bar.

Pete is also fretting about the deal he had with Luanne’s father, where he lent him ten thousand dollars for a business venture and that money was never repaid when he died. Pete is sure that Luanne socked the money away.

Luanne tells Pete that she knows he raped his daughter, which Pete says only happened once when he was drunk and he didn’t know what he was doing. She tells him that he should be grateful she has kept her mouth shut and the money she has taken from him, should be considered as a payment for her silence.

Bobby, to spite Luanne, gets Ralph fired from his handyman job, which causes Ralph to go into a panic that he won’t have enough money to live in this small-town and he wails that he does not feel secure enough to live anywhere else. His panic continues even after Luanne tells him not to worry, that she has some money saved to support them.

Ralph falls in love with Danny, as he watches her strip show and tries to build her confidence by complimenting her act. Luanne sensing that Ralph has found another woman, gets Bobby on her side by offering him a lot of money to take care of the stripper. But Bobby can’t go through with it. In the meantime Danny plots with Ralph, telling him that he should kill Luanne and that afterwards they should get married.

The film comes to its climax as Luanne is murdered. In the book, the author never revealed who did it. Ms. Greenwald, instead, lets the viewer see who killed Luanne. She aims to show all the desultory characters and how their hatred motivates what they do in life, in lieu of going for the suspense.

The film failed to be a nail-biter and it wasn’t psychologically deep, nor was it morally arresting; but, what it had going for it in spades, was showing a feeling of deep noir malaise. The film caught the essence of these wasted souls and gave them their 15-minutes of infamy. A competently made film if you are willing to be taken down such dark stairs, where the light is very dim and the view is not that great about the human condition. 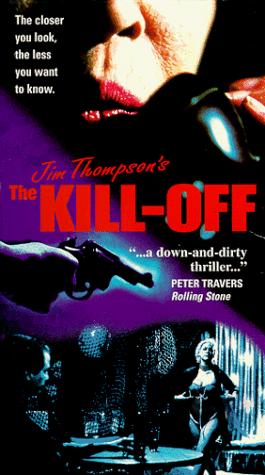