“It’s one of Harrington’s best films.”

What’s there not to like about this perverse cult horror pic helmed with a tongue-in-cheek black humor by Curtis Harrington (“Ruby”/”Night Tide”/”The Dead Don’t Die”)? This obscure pic is one of those treasures that few have seen due to the studio’s unwillingness to promote a film it didn’t understand, as it had only a short theatrical run and for many years was unavailable on DVD. It’s one of Harrington’s best films. Writers Tony Chechales and George Edwards keep it a wacko mix of psychological suspense with large dabs of sleaziness, in a script that strays dangerously close to going overboard on camp.

The sullen 21-year-old Terry (John Savage) is released from the slammer after serving a two year sentence for raping a teen named Tina (Sue Bernard) under the pier and moves back in with his former dancer mom, Thelma (Ann Sothern), who suffocates him with overprotective love. The doting mom’s answer for all problems is to give sonny boy a glass of chocolate milk. The now chubby, over dolled up and acerbic Thelma runs a Hollywood boarding house, for a mostly elderly clientele, in the spacious Victorian house she inherited from one of her former lovers.

Terry resents being a bastard, not ever knowing his father, and lets his unapologetic mom know it. He acts peculiar at the boarding house and soon terrible things start happening to the boarders and those that the psychopath believes did him wrong. He sends Tina to her death in a car that careens off a cliff and then sets his inept lawyer (Ruth Roman) on fire. He retaliates against the slutty Tina for lying at the trial and not telling she was gangbanged and that he was forced to participate, and blames his lawyer for her poor defense landing him in the slammer. At the boarding house the dangerous lunatic becomes a peeping tom, as he turns his sickie attentions on an overfriendly loner, out-of-towner aspiring model named Lori (Cindy Williams, soon to hit it big-time with “Laverne and Shirley”). Terry also reacts strangely cruel to a frustrated prim boarder spinster librarian named Louise (Luana Anders), who spies on him and tries to come onto him one evening when inebriated. Louise has the film’s best one liner, as she tells Terry why she lives with her grumpy dad: “I’d rather be with someone I didn’t like rather than be alone.”

Savage as the misunderstood perv is a chill, while Sothern plays her dysfunctional mom part with just the right amount of glee and pathos. It’s a disturbing pic that follows its unbalanced serial killer as he brutally goes about his demented business in a hectic two week killing spree and, all the time, it never misses a beat in being a real sickie treat for those seeking out something so genuinely perverse. 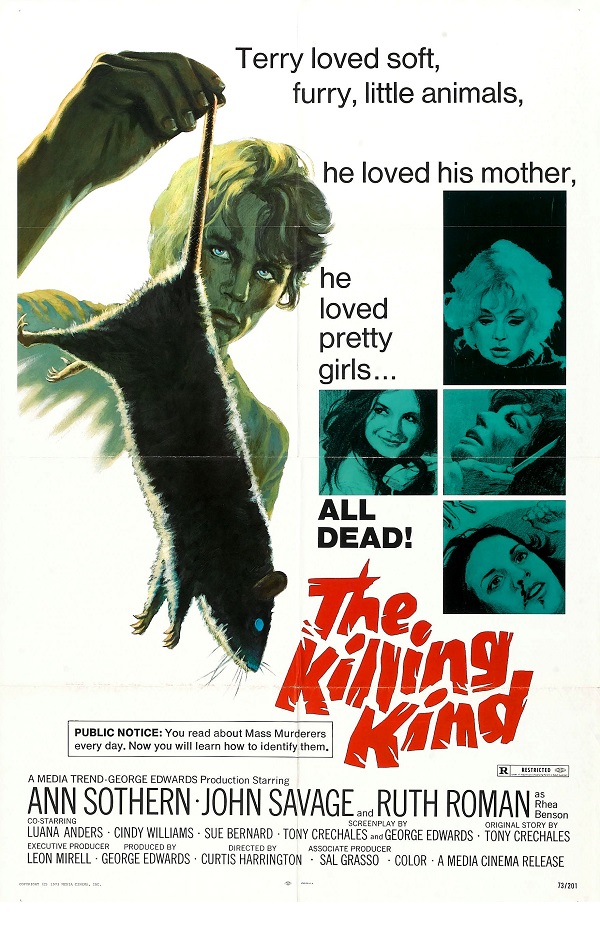