“One of the greatest action escapist films ever made by a nerd.“

Quentin Tarantino’s (“Reservoir Dogs”/”Pulp Fiction”) fourth film Kill Bill: Volume 1 is a showing off of his muscular filming techniques in the name of pop-culture. It is his first directorial effort since 1997’s Jackie Brown. Kill Bill is a hipster’s love letter to the 1970 Hong Kong actioners and Japanese samurai and blaxploitation thrillers and many other lowbrow adventure vehicles such as spaghetti westerns and yakuzas, that plays as style over substance. Kill Bill appeals mostly as a smartly done flick addressed to a grownup audience that never got over their adolescence, as it brings back sweet memories when they and the filmmaker went to the local movie house’s Saturday matinee to see such trashy B films and serial chapters. The thin story is crammed with bloody nonstop action, unbelievable action characters, a 10-minute homage to Japanese anime and too many in jokes involving a multitude of B film references to personal tidbits about the auteur, so that even knowledgeable film buffs shouldn’t feel comfortable they got them all. It’s intended as exploitation entertainment with perhaps gaudy pretensions of being somewhat heavier than its surface material, though it should please mostly those who are impressed by a filmmaker who is so assured of his talents that he creates a film that glides along so effortlessly cinematic. The director seems to be laughing to himself at how easy it is make such a mindless film. If you got the sense of humor to go with all the gore and B movie cliffhangers and inanity randomly poured across the bloody screen, this can be viewed as one of the greatest action escapist films ever made by a nerd. To annoy even its heartiest supporters it also comes without a final payoff, as the fun-loving Quentin and Miramax’s money-loving Harvey Weinstein leave their payoff in the sequel, at the obvious urging of the Miramax people. Mr. Weinstein’s astute business-like thinking is why the film not only gets the viewer once, but shoots for a double-dip. It is hoped that the Tarantino believers will wait with their tongues hanging out of their mouths for the next installment promised some four months later.

Kill Bill is played as a pure revenge tale that never takes itself seriously for a Batman moment. In one of the opening scenes the film’s theme is flashed across the screen in mock seriousness: “Revenge is a dish best served cold.” By using so many of the old standby formulaic themes from a host of action films, you can’t help but think you are viewing many such films all at once.

The show gets off to a bang as Nancy Sinatra warms the audience up for the pulp smorgasbord onslaught to follow by singing Sony Bono’s Bang Bang My Baby Shot Me Down over the title credits, which was quite a splashy way to begin this lovable bloodfest.

Tarantino tells the story of the unidentified pregnant Bride (Thurman), formerly known as Black Mamba, a member of the Deadly Viper Assassination Squad (Divas), who was betrayed by four of her colleagues and their controlling mysterious Oedipal-like leader Bill (his voice is heard but his face is never seen), as she was left for dead in El Paso, Texas, four years ago on the day of her church wedding. The Bride, who gave the minister the fictitious name of Arlene Machiavelli, was discovered by the sheriff in a bloody mess but though unconscious was still alive as nine others in her wedding party were slaughtered.

Since we are informed that “Revenge is never a straight line,” the tale is told out of linear order as the Bride first confronts her betrayer, the former Viper Vernita Green (Fox), at her fancy suburban home in Pasadena and in a kick-ass knife fight in the TV room, interrupted only because the black woman’s innocent 4-year-old daughter comes home from school. The fight continues in the kitchen over a box of cereal with The Bride chalking off one from her hit list. Then the film returns to the hospital, where The Bride awakens from her four-year slumber to find that the hospital’s male attendant Budd (Madsen) is pimping out her comatose body to a horny customer, who is told he can have sex with her any way he wants as long as he doesn’t leave any marks on her body. The Bride brutally dispatches of these two creeps, wiggles her toes and steals Budd’s garish mustard colored station wagon with Pussy Wagon painted in bold red letters on the rear. Tarantino is sticking with the adolescent theme as he keeps his humor childish throughout. Some thirteen or so hours later The Bride lands in Okinawa and asks the owner of a sushi-bar, Hattori Hanzo (Sonny Chiba, the noted martial-arts expert), to make her a magical samurai sword to vanquish her Viper enemy. This second killing was actually the first, as the film plays games with the order it tells its story–not that it matters, since the story is inconsequential. The Bride’s enemy is the Chinese-American ex-Viper O-Ren Ishii (Lucy Liu), who’s now Tokyo’s first female head yakuza boss. The stylized confrontation between the two former Vipers takes place in a paper-wall Tokyo disco/restaurant, where the staggering body count and the massive blood spilled should bring relief to even the most bloodthirsty action film viewer. One of the hundred or so combatants The Bride has to kill before she gets to face off with O-Ren is a crazed schoolgirl named Go Go Yubari, who is still dressed in her school uniform and is wielding a spiked ball and chain. In between those action shots and The Bride’s month of practice while in Okinawa waiting for her sword, we catch The Bride’s earlier stay in the hospital, as another Viper, the one-eyed blonde Elle Driver (Hannah), dressed as a nurse and sporting a red cross on her eye patch, has entered The Bride’s room and is about to inject her with a deadly serum but for a last second phone call from Bill to abort the mission. Bill thinks such a hit job would be beneath him, as this display of gallantry is meant to be amusing. The only thing that might be taken for real, is Tarantino’s respect he throws out to women as men’s equals in fighting, ruthlessness, and power grabs. But whenever the central figure in the story, Uma, is dissed, then there’s hell to pay for taking advantage of such a lovely lass.

This is Uma’s coming out party as an action actress and she shows that despite her clumsiness she can get over with the best of the women action fighters and that she’s up to the physicality of the role as an avenging angel. Though she’s not in the same league as most of the Hong Kong action film fighters in her fighting skills or with those who starred in Ang Lee’s 2000 Crouching Tiger, Hidden Dragon, but she doesn’t have to be because she’s so good as an actress. Uma makes her mark by how gracefully she carries the film as its most interesting character and as the one who will eventually lead us to Bill.

It was meant to be a fun pic and not to be judged as anything else, and in that fun part it more than accomplishes its mission. I found it more spirited than The Matrix with all its eye-opening computer-made fight scenes and scores high if judged against Robert Rodriguez’s mindless “Once Upon a Time in Mexico,” which shoots for the same killing spree effects but possesses none of Tarantino’s pure passion and sensibilities for film. It is only when you measure it against Jim Jarmusch’s 1999 Ghost Dog: The Way of the Samurai that it pales. Jarmusch showed that some seriousness in purpose to all the frivolity pays off in a work that cuts deeper into the skin. Somehow Tarantino in the first half of his work never got around to showing why this overload of pop-culture and cheap sight gags and set action pieces is memorable or emotionally involving or has any psychological worth. It might be fun to kill some time with such well-made artistic nonsense, but so far it doesn’t have the hook in it to make it standout except in a clownish way. Final judgment will come with the sequel. 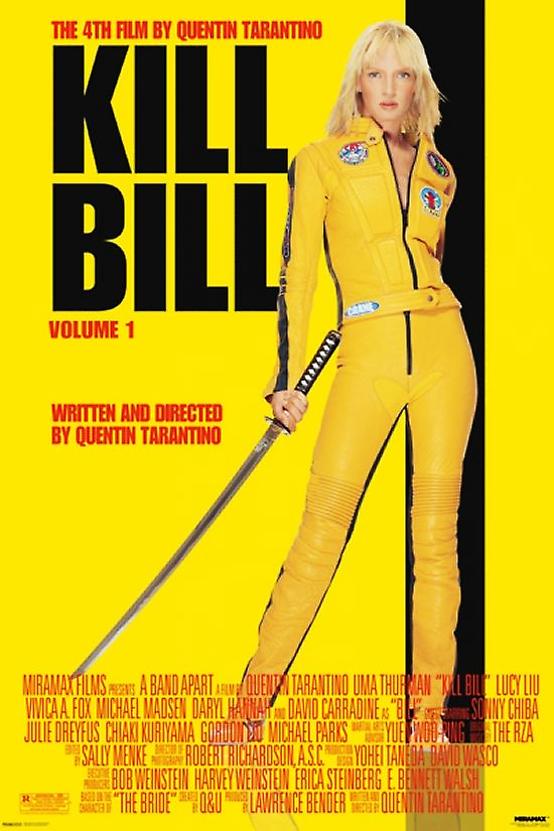