Joe Brewster’s low-budget indy The Keeper, in which he directs and wrote the screenplay, is about the life of a liberal 36-year-old law student prison guard, Paul Lamont (Giancarlo Esposito), in Brooklyn’s House of Detention. It’s a human interest psychological drama that lacks insight though it’s full of psychological implications. Paul treats the prisoners with respect as human beings and conscientiously informs them of their legal rights, in contrast to many of the other guards who regard them as animals deserving of ill-treatment.

It won the Best Film award at the Newark (NJ) Black Film Festival.

Paul identifies with a fellow Haitian immigrant prisoner under his charge, as Paul’s father was Haitian — but he disavowed that line of heritage to try and fit into the New York scene. The prisoner, Jean Baptiste (Isaach de Bankole-French actor), is a gentle soul who denies he committed the rape he’s serving time for, and the do-gooder believes him and posts his bail. But it doesn’t end there as the released prisoner is unable to find employment as a baker and also needs a place to live, he therefore boldly shows up at Paul’s residence to ask another favor. Paul takes the stranger in to sleep on the living room couch despite objections from his schoolteacher wife Angela (ReginaTaylor) that he’s a possible danger. Soon things don’t go as expected, and complications arise that test Paul’s humanitarianism and question his own refusal to recognize his Haitian roots, as the prisoner irks Paul as he constantly shows off how well-versed he is in Haitian culture to his impressed wife. Angela in the course of time bonds with the lively prisoner and goes night clubbing with him to the local Haitian hot spots, as the pensive Paul gets stuck with overtime and begins to sulk. All her attention goes to the prisoner, which causes jealousy to set in and make Paul wonder what he’s let himself in for. At the same time as his marriage is deteriorating, his jail keeping experience begins to sour as his theories about justice are questioned by the everyday realities and by a brutal prison beating he becomes a part of.

All this psychological suspense is finely fitted into the storyline, as the filmmaker possesses an M.D. in the field of psychology. Brewster should know about that field since that’s his day job. The storyline is also aided by the realistic jail scenes early on in the film that are indeed frightening. But whatever intelligence was generated gives way to melodramatics and the film flags from such unneeded weight until it kicks in with a seemingly forced ending that brings the prison type of violence into Paul’s homelife. By that time the film lost me, as the filmmaker’s inability to convey the drama of the story and make it visually appealing leads to its downfall. Brewster’s filmmaking style as a director was too clunky to keep up with his writing ability. 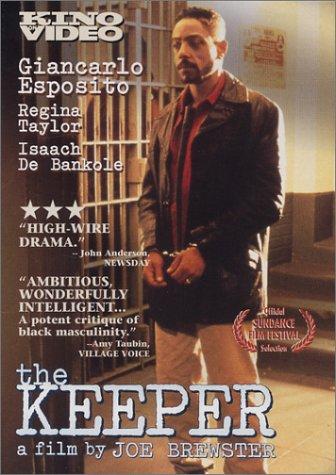