JUNO AND THE PAYCOCK (aka: THE SHAME OF MARY BOYLE)

“A faithful Casey adaptation, but one that’s stagebound and lackluster.“

Alfred Hitchcock(“Psycho”/”Rear Window”/”Vertigo”) adapts the 1924 modern classic tragicomedy play Juno and the Paycock by Sean O’Casey to the screen. This early Hitchcock film is not in the style the master director was known for. The future master filmmaker turns out a faithful Casey adaptation, but one that’s stagebound and lackluster. Hitch’s wife Alma Reville handles the screenplay.

It’s set in Dublin during the 1922-1923 civil war (a treaty between the United Kingdom and Ireland for the Free State of Ireland had the UK retain control over Northern Ireland; a civil war broke out between those who supported the treaty and those who demanded independence). During these strife-torn times (shown in the opening scene as a Dublin street orator (Barry Fitzgerald, in his film debut) gets sprayed with off-the-screen machine-gun fire while addressing the populace about the occupation) the struggling Boyle family is held together by the headstrong matriarch Juno (Sara Allgood). Her idler hubby, “Captain” Jack Boyle (Edward Chapman), is referred to as the “Paycock” because of his habit of strutting uselessly about as if he owned the world. Jack is a barfly and is unemployed, without any prospects of getting work. Their troubled anti-social, jittery son Johnny (John Laurie) lost an arm while serving with the Irish Republican Army (IRA) and the withdrawn moody lad is haunted by his secret betrayal of a comrade. Their daughter Mary (Kathleen O’Regan) is good looking, sweet and dependable, who is being chased after by Jerry Devine (Dave Morris). When a handsome and well-dressed young solicitor, Charles Bentham (John Longden), tells the family that Jack’s recently deceased relative left him a tidy inheritance that should take them out of poverty and becomes a possible suitor for Mary, things are beginning to look rosy for the Boyles. The clan gathers together in their newly decorated tenement apartment and with their friends–pub owner Maisie Madigan (Maire O’Neil) and Jack’s idler chum Joxer (Sidney Morgan)–hold a singalong and play their new gramaphone. But tragedy awaits the Boyles, that brings them to the brink of destruction.

Though well-received when first released, today it’s of interest mainly as an historical record of Hitchcock’s early films and for the great actress Allgood to be seen on screen as she reprises her signature stage role and for the harrowing depiction of tenement life in Dublin during the civil war period.Most of the actors were from Dublin’s revered Abbey TheatrePlayers. 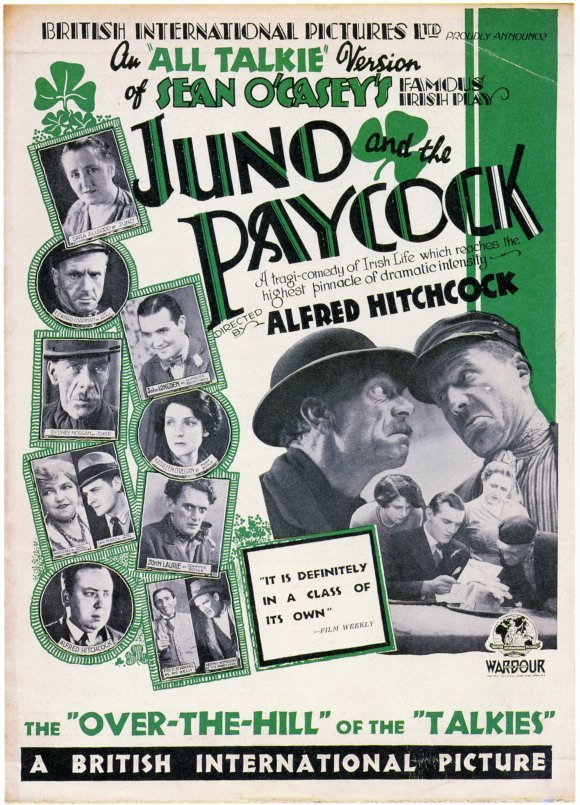