Lew Landers (“The Raven”/”The Return of the Vampire”/”The Boogie Man Will”)directs this weak entry in Columbia’s weak but popular Jungle Jim series. It’s based on the popular 1930s comic strip, and is written by Sam Newman. The plot holes are wide, the story is lame, the dialogue trite, the romance is laughable and the acting wooden. What it has going for it is that the formulaic series is easy to take, real pro football star Bob Waterfield takes the field in the jungle as an actor and it’s only 66 minutes. The film asks the question, Who needs money in the jungle?

When local tribes deep in the African jungle are suddenly raided and the men kidnapped,Bono (Rick Vallin), a village chieftain, escapes to tell safari guide and hunter Jungle Jim (Johnny Weissmuller) that the raiding party is led by a white man. Meanwhile Jim has just rescued the brash freelance photographer from LA Anne Lawrence (Sheila Ryan), whose boat tipped over in the river rapids. Anne is financed on a search expedition by the wealthy uncle of Bob Miller (Bob Waterfield), the former football star and war hero, whose plane crashed in the African jungle nine years ago. The money-hungry Joan is hired to locate the uncle’s missing relative (why he waited nine years is a good question that’s never raised). The three, along with Jim’s chimp companion Tamba, go deep into the jungle searching for the raiding party with the blessings of the other peaceful tribal chiefs, as they try to put a stop to these raids. Before you can yell quarterback blitz, Bob Miller is spotted in the Sengali territory and he helps the trio escape from a village attack by the skeleton people who are led by a white man. Bob explains he was nursed back to health by the natives after his plane crashed in the jungle and feels comfortable living in the jungle and repaying his debt to the natives by teaching them how to use a few things from civilization such as irrigation. Before you can shout touchdown or telling Bob to take off his pilot’s black leather jacket, we learn the white man villain is a greedy industrial chemist, Dr. Mitchell Heller (Lyle Talbot), operating in the dangerous uncharted territory of the Monagechi land. The chemist has discovered by mining igneous rocks and then forging them, he can manufacture valuable synthetic diamonds. To do the mining, Heller needs a constant supply of slave labor because when mined the rocks give off a deadly radiation and the miners exposed for more than a few days will die. 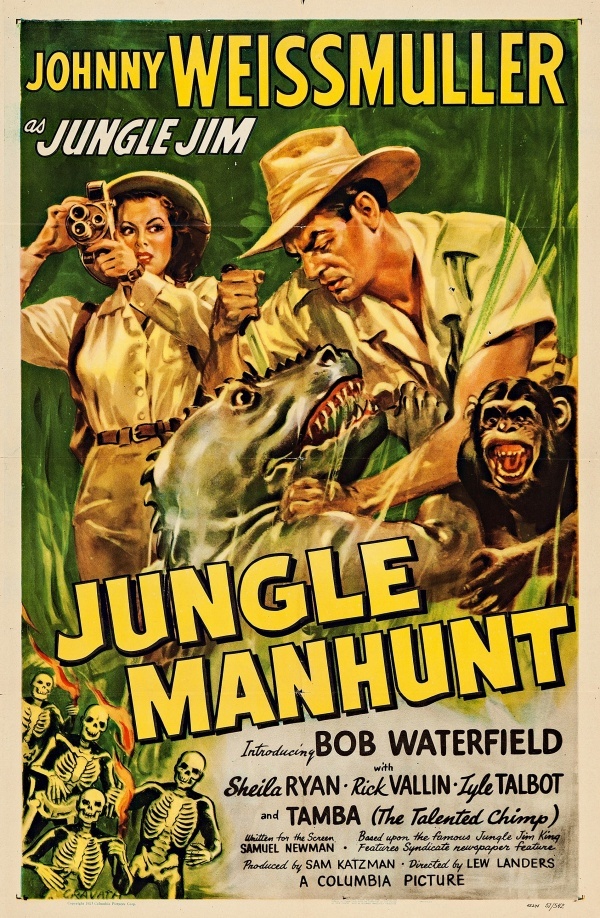