JUNGLE JIM IN THE FORBIDDEN LAND

“This eight in the Jungle Jim series is as ridiculous as any of the thirteen made, but is still enjoyable as an unsophisticated boys adventure film.”

This eight in the Jungle Jim series is as ridiculous as any of the thirteen made, but is still enjoyable as an unsophisticated boys adventure film. Prolific B film filmaker Lew Landers (“The Raven”/”The Adventures of Kit Carson”/”The Return of the Vampire”)sticks to the formula of the series, while writer Sam Newman makes sure the straight-arrowkhaki-wearing Jungle Jim (Johnny Weissmuller)is up to handling the dangerous ivory poachers, pre-historic giant beasts and your normal jungle animals like the fierce panther and the strong hippopotamus.The cheapie production, filmed on the back lot and using tacky special effects and stock film footage, works for the accepting kiddies and adults who go nostalgic over those adventure pics they might have caught back then at a Saturday matinee.

In Wasabi, Africa, American anthropologist Dr. Linda Roberts (Angela Greene) is turned down by the arrogant new Commissioner Kingston (Lester Matthews) to get a permit to hire a safari guide to locate the forbidden land of the Giant People. Linda wishes to study the violent Giant People to give science answers about the missing links. Instead the persistent Linda treks into the jungle and begs legendary safari guide Jungle Jim (Johnny Weissmuller) to lead her there. He refuses. Called for a meeting with the blind local wise man, known as the Old One (William Fawcett ), Jim’s told by Kingston that traders seeking ivory are murdering a herd of elephants trapped by flood waters, caused by an earthquake, in a remote part of the jungle, and asks Jim to show him the passage into the Giant People land so he can save the elephants. Jim again refuses, saying the Giant People are too dangerous and disturbing them is too risky. Kingston lets on that his government troops have captured two of the Giant People and caged them.

Honest Ivory hunter Fred Lewis (George Eldredge) is killed by his evil ward Denise (Jean Willes) and her toady boyfriend, Doc Edwards (William Tannen), Fred’s new assistant, before he can tell the commissioner of their plans made with the Zulu chief (Frederic Berest) to slaughter the elephants for their valuable ivory tusks. Denise and Doc have jumped Jim and by giving him a truth serum have discovered where is the secret passage to the Giant People. They also frame Jim for the murder of Fred, enabling his arrest.

Lucky for Jim, his pet chimpanzee Tamba aids him when he’s bound by the government troops and this enables a free Jim to fight off the two dangerous Giant People who escaped capture, the Zulu tribe set to slaughter the elephants at the secret path of the Giant People and, finally, the diabolical evil white ivory hunters. 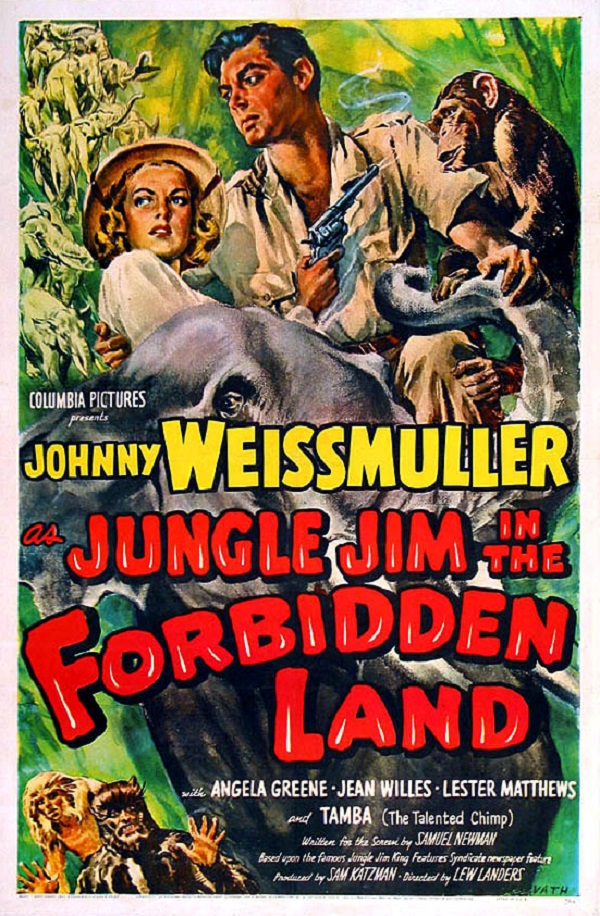