“This in-your-face film is about attitude.”

Writer-director Harmony Korine (“Gummo”), the former skateboarder who wrote the screenplay for Kids, likes to do his own thing in films. His auteur signature is to create shocking scenes and characters who will try to freak the audience out. This in-your-face film is about attitude. I can’t say that I enjoyed it, or found it interesting, but I can say that I found it different…and it didn’t box me in as to how I was to view the characters. Yet Korine didn’t seem to trust all this poetry he was spreading about and needs to end the film in a conventional way, with a dramatic scene regarding the pregnancy of Chloe Sevigny.

Korine shot it on digital video and transferred it to film according to the rules of Dogma 95.

The film is an anti-narrative and linear work. It sets its sights on a dysfunctional family, living together in Queens, by following them around to see their everyday existence, while encouraging impromptu situations and dialogue. Julien (Ewen Bremner) is a mentally unbalanced 21-year-old, who has conversations with himself often repeating what he says while his arms are flailing. There is an amusing sketch with him having an imaginary conversation with his houseguest Adolph Hitler. He is prone to babbling, drooling, and acting outrageous in a harmless way. He also has some nifty gold false teeth he takes in-and-out of his mouth. His ballerina and pirouetting ice-skating sister Pearl (Chloe Sevigny-the real-life girlfriend of Korine) is seven months pregnant with Julien’s child. She will call julien from one of the rooms in their middle-class two-story brickhouse, pretending to be his dead mother, offering him words of love and comfort. His abusive father (Werner Herzog-German experimental director) has a few screws loose himself and tries to be the disciplinarian in the family when he isn’t wearing his gas mask and listening to bluegrass music, or drinking cough medicine from a slipper. The father forces Julien to be hosed down in cold water — which he does because he wants his son to act like a man — telling him a winner doesn’t shiver. The most sane one in the household is the high school student brother of Julien’s, Chris (Evan Neumann), who is not overflowing with brains. He is a physical fitness nut and is seen in one scene wrestling with Julien and from time to time he is seen doing a weird work-out routine, whereby he climbs the stairs by using only his upper body. He also is subject to his father’s drunken discipline and miserly love, as are the other children.

A host of characters infiltrate the film for some quick laughs but, as odd as they were, they seemed like the type of people the family members would be acquainted with, so the scenes with them didn’t appear to be as much a freak show as it was a way to make the film entertaining. But the problem was they didn’t go with the flow of the film, as their eccentric behavior seemed forced. They include a handless man who does card tricks and plays the drums with his feet; some blind and retarded youngsters from the school Julien works at, whom he hangs out with at a bowling alley–they are seen as spastics to be laughed at; a black albino rapper from Alabama ranting about doing your thing; and, there is a wonderful scene, with Julien and his family at a Pentecostal church, getting into the Jesus thing black Southern style, with Julien having a tear roll down his face while into jumping up and down like the emotional minister and the black congregation.

In the film’s most dramatic moment, towards the end of the movie, Pearl trips while at an ice rink and has a miscarriage. Julien goes to the hospital and steals the dead fetus, taking it home on the bus and cuddling up with it under the covers when in his bed.

I appreciate the effort for originality attempted, especially with the abundance of formula mainstream and indie films pushed at the public, but I would like to see something more intellectually demanding than just a rant against conventional filmmaking. The filmmaking skills are there but as of yet, I don’t see the 25-year-old director moving too far from the childish shock scenes he threw at the audience for his first film. Mr. Korine dedicated this film to his Uncle Eddie, a patient at the Creedmore Psychiatric Center in Queens Village, and the film’s central character Julien is a schizophrenic modeled in a loving way after his uncle. I’m sure the director meant well by this characterization and that is not where I have difficulty with this film. My difficulty is that the novelty of hearing the incomprehensible chatter of Julien soon wore off and the film seemed to grow vacuous and became more a technical film addressing how Korine can fool those Dogma 95 people by putting in shots with artificial light which he did numerous times, thereby breaking the rules he promised to fulfill when getting his Dogma 95 certificate.

I would much rather he had made a more substantial film rather than making another anti-intellectual indie film, mainly showing off his superior knowledge of digital video techniques…but offering no real insights into the mentally unbalanced characters deeper than the surface. There is still too much skateboarder braggadocio in Korine and not enough filmmaker…but the future holds a lot of promise for this talented filmmaker. 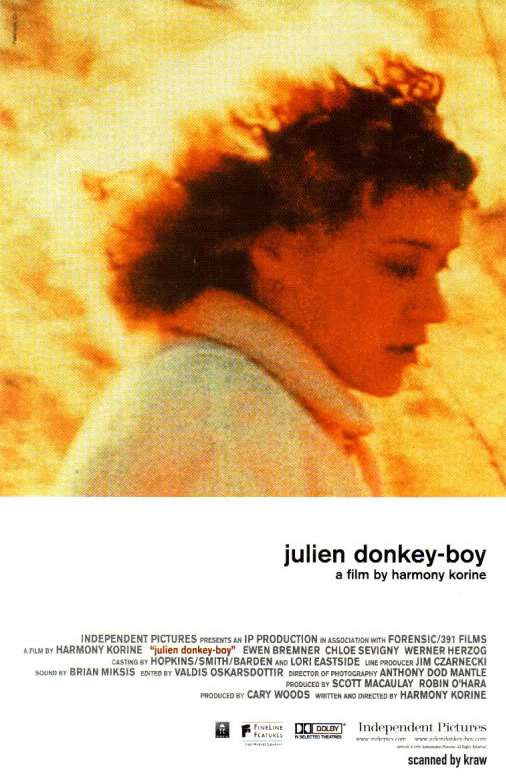