“The acting by the three stars is superb, though this is ultimately Jeanne Moreau’s film.”

Francois Truffaut’s (“The 400 Blows”/”Shoot the Piano Player”) Jules and Jim is the French New Wave director’s third film, shot when he was 29, and still his most popular film. It’s based on the semi-autobiographical novel by Henri-Pierre Roché (written when he was in his seventies). Though not the great masterpiece once believed, it’s still a heart-moving film that is most alluring and enjoyable. The acting by the three stars is superb, though this is ultimately Jeanne Moreau’s film. It spans from 1912 until about 1932, telling of the friendship and love in a doomed ménage à trois. A narrator tells the story.

Oskar Werner is the quiet and conservative Austrian named Jules and Henri Serre is the extroverted and adventurous Frenchman Jim, both young bohemian poets and kindred spirits who meet in Paris and teach each other their native language. After their singer friend Albert (Boris Bassiak) has them over for an art slide-show, they go on holiday to an open-air museum in Greece to see in person the slide they adored and both fall in love with the mysterious smile from the ancient Greek sculpture–vowing to find a woman with the same smile. Back in Paris, the love is transferred to the older, free-spirited French woman illustrator Catherine (Jeanne Moreau) who is described by them as a marvelous “force of nature” and a queen. The three characters become inseparable friends, determined to live their lives to the fullest pleasure. Both men fall in love with Catherine, but even though she loves both men in different ways she chooses the doting, generous and more naive Jules and they marry–living in a chalet by the Rhine countryside. Just as they marry, WWI begins and the men are fighting on opposite sides on the front lines with both concerned about killing their best friend on the battlefield. After the war, Jim visits Germany as a freelance newspaper journalist writing articles on the ruined country and calls on Jules and Catherine, now with a five year old daughter Sabine (Sabine Haudepin). Jim first thinks their marriage is blissful but Jules tells him that their marriage is on the rocks and that Catherine has several lovers, even taking off for six months with a lover while leaving Sabine to be cared for by him. When Catherine makes an attempt to romance Jim, Jules says he will grant her a divorce if he marries her–explaining that this way she will still be in his life. Catherine agrees, but Jim doesn’t want to give up his Parisian lady friend Gilberte (Vanna Urbino) and the marriage is put off for good when Catherine can’t get pregnant by him. This throws Catherine into a turmoil, as she’s used to getting her way and can’t handle it when she doesn’t. But the three friends continue their open free-love relationship when Catherine and Jules move back to France.

It’s a sharply drawn allegorical film that goes full circle around, as it begins in lighthearted gaiety and ends in tragedy–reflecting in their personal lives the events of the world going from hope that the Great War will bring a lasting peace and ending in pessimism with a newsreel showing a Nazi book burning. The characters inability to love each other despite being in love can be compared to the failure of the victor France to offer its true love so that the dark side of the vanquished Germany won’t rear its head and take everyone down with their destructive nature when they don’t feel loved anymore. 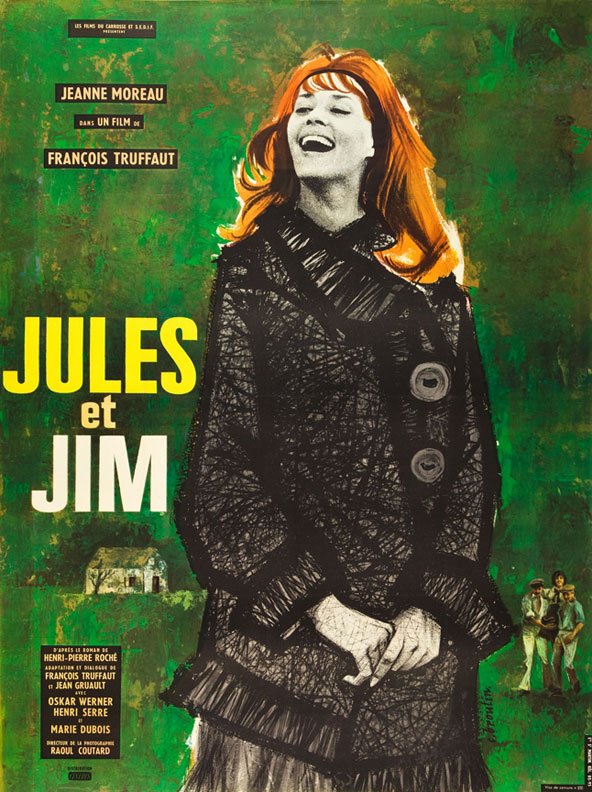