“It’s a twisty plotted film noir involving smugglers and a double-cross that is set on the dimly lit docks and in the swinging French Quarters of New Orleans.”

RKO’s Johnny Angel was directed at a brisk pace by Edwin L. Marin and adapted by screenwriters Steve Fisher and Frank Gruber from a short story by Charles Gordon Booth. It’s a twisty plotted film noir involving smugglers and a double-cross that is set on the dimly lit docks and in the swinging French Quarters of New Orleans. George Raft plays his trademark tough guy role to perfection, as he dons a spanky new sea captain’s uniform and becomes Captain Angel — who works for the Gustafson Steamship Line, where his father also works as a captain. Johnny discovers in the sea fog a ghost ship and is alarmed to find no crew and a ship that shows signs of a battle taking place, as it’s riddled with bullet holes and broken furniture is strewn across the deck while its cargo of African mahogany is still suspiciously on board. It’s his father’s ship that recently sailed from France and he knows his dedicated father would never abandon ship, so he assumes that he’s dead because of a foul deed.

Johnny goes into his strong-arm detective mode and aims to clear up the mystery and his father’s name of any misdeed while also catching the murderer or murderers. Meanwhile the spineless, chubby, baby-faced steamship line owner, Gusty (Miller), doesn’t seem too concerned about Captain Angel’s disappearance but more about the cargo and his adulterous wife. He’s married to the sexy and scheming Lilah (Claire Trevor), who previously sang in the nightspots in the French Quarters. Lilah loves two things more than anything else: money and Johnny Angel. But since Johnny has ignored her until this incident, she’s having an affair with the shady owner of the Jewell Box Cafe, Sam Jewell (Gilmore). Gusty loves his Lilah more than anything else and would do anything for her, which gets the disapproval of his overbearing ex-nursemaid who is now his personal secretary, Miss Drumm (Wycherly). She runs the business for the spoiled man-child, whom she dedicates her life to looking out for and pampering.

It’s a familiar film noir tale about avenging a murder of a loved one, a femme fatale getting her man to do her foul deeds, and of the two men struggling to hold their own against the gigantic shadows of their fathers.

Johnny hires taxi driver Celestial O’Brien (Hoagy Carmichael) to take him around the French Quarters to find a mysterious French woman seen getting off the ghost ship by one of the dock security guards. He finds her in a dive and learns her name is Paulette Girard (Signe Hasso) and that she’s frightened of him and unwilling to talk to anyone. When she’s shot at outside of the Jewell Box, Celestial hides her in his relative’s place and Johnny comes there to calm her down and tell her he’s on the good guy’s side. Celestial is by now pals with Johnny and when he’s not whittling away at making toy propellers and singing “Memphis In June,” he’s ‘Johnny on the spot’ for keeping an eye out for Paulette. She tells Johnny how she stowed away on the ship with his father’s permission and watched a raiding party climb aboard and steal some secret cargo of gold bullion and then kill all the crew, but in turn these smugglers get killed by an unseen stowaway who steals the gold for himself and also kills Captain Angel’s father.

The film works best when it shows the determined Raft searching the nightspots in the French Quarters for clues to his father’s disappearance. Those scenes were photographed in a rich noirish shadowy style by Harold J. Wild and set the film’s threatening mood. Raft gives this yarn the energy it needs, while all the noir conventions are used effectively in a workmanlike way by Marin. What it fails to do is provide any surprises. But it was still good enough to make Johnny Angel a box-office hit. 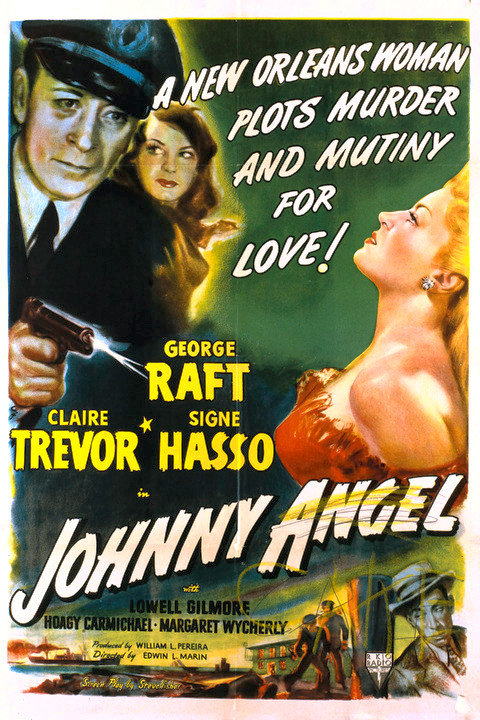