JIGOKU (aka: THE SINNERS OF HELL)

“… disquieting morality tale based upon the Buddhist concept of an afterlife.”

Japanese writer-director Nobuo Nakagawa’s (“Ghost Story of Yotsura”) most ambitious film is about infernal desires that tempt us during our life and the imagined agonies that await those in the afterlife who screw up. The film has long been considered a cult classic. It was taken from Genshin’s Ojoyoshu, a 10th-century Buddhist treatise on the various torments in the lower realms. Jigoku was the last of nine innovative horror films made by Nakagawa, known as the father of the Japanese horror film, for the Shintoho Studios (the studio would go bankrupt soon after this film was released). The horror film is filled with incomprehensible situations, a visual feast of brutality and acts as a lurid study of sin without salvation. The film comes to life in its third act, as Nakagawa dazzles with his stunningly erotic-grotesque visualization of his interpretation of the lower depths. It has the kinky feeling of a cross between a fringe theatre production and a funky heavy metal light show, as it relentlessly presents its orgy of Buddhist inspired torments.

The film opens with Tokyo theology Professor Yajima (Torahiko Nakamura) lecturing on the “concepts of Hell” and about the The Eight Great Hells according to the Buddhist sutras. Listening attentively is theology student Shiro Shimizu (Shigeru Amachi ), who is engaged to the professor’s sweet daughter Yukiko (Utako Mitsuya). Shiro is a nice but weak-minded guy who has come under the influence of another student, the demonic Yoichi Tamura (Numata), and his fate becomes doomed when the two go down the wrong back road and on the poorly lit street Tamura runs over a drunken yakuza, Tiger Shiga (Hiroshi Izumida), who stumbles onto their path. The driver takes off leaving the victim to die the next day, but not before his vengeful mother, Mrs. Shiga (Kiyoko Tsuji), who witnessed the accident, got his license plate number. Mom makes a pact with her late son’s hooker girlfriend Yoko (Akiko Ono), to locate and kill the hit-and-run drivers. The guilt-ridden Shiro tells Yukiko about the death, and they take a cab to the police station where he intends to confess, but the cab careens off the road and Yukiko dies. A crestfallen Shiro is turned away by his fiancée’s grief-stricken parents and takes solace in drink and self-pity. Shiro is called to the countryside in Tenjoen because his mom, Ito (Kimie Tokudaiji), is critically ill. His dysfunctional parents dwell in a retirement facility in rural and unsophisticated Tenjoen. The retirement home is filled with misfits, such as a drunken painter who is working on a painting of Hell and is wanted as an art forger (Jun Otomo), uncaring adulterers, an incompetent and criminally negligent doctor (Tomohiko Ohtani), a corrupt lecher of a cop (Hiroshi Shinguji), and the double of Yukiko (named Sachiko). Tamura also puts in an appearance, as do the hit-and-run vic’s mother and former girlfriend, and the parents of Yukiko. Shiro meets his end when he’s part of the community’s festive orgy (celebrating the retirement center’s 10th anniversary) which leads to a mass death scene, where all the guests succumb after being served tainted fish and poisoned sake. This takes Shiro, who can perhaps be faulted only for knocking up his girlfriend and not being selective enough in his choice of friends, to his last stop, the titular destination of Jigoku (Hell). In Hell Shiro recounts all the sins of those he knew who are now in this infernal place. The sinners pay the piper for their sins in punishments that play out as a Boschian nightmare in gore and unbearable horrors, and in a frantic way it gives us a look at the filmmaker’s perceived take on oblivion.

The film gave rise to at least two remakes (in 1979 by Tatsumi Kumashiro and in 1999 by Teruo Ishii), but this disquieting morality tale based upon the Buddhist concept of an afterlife where one cannot escape one’s lifetime deeds, even in death, is the real deal and the one that should be seen before the others. 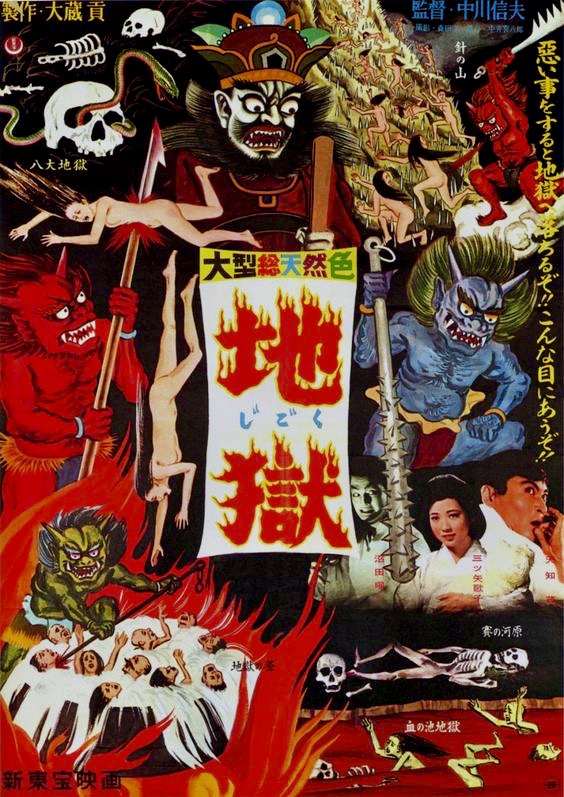