Though the film remains a major disappointment it’s still directed by the great Josef von Sternberg (“The Blue Angel”) and written by Jules Furthman, who give it a few endearing comic touches (a soft-core striptease by the sexy heroine) that also includes some super aerial footage (staged by legendary test pilot Chuck Yeager). Despite its failure to come to life as an honest cold-war spoof and how ludicrous are its propaganda messages, the film-making is still first-class (it’s a stunningly beautiful looking film). Executive producer Howard Hughes envisioned a different film and spent seven years shooting it again (using Nicholas Ray) and chopping it up even further before releasing it.

Janet Leigh plays Lt. Anna Marladovna, a sexy Russian jet pilot who defects to the American side while on a spy mission (she’s actually a Communist spy trying to get top secrets from a high ranking commander). John Wayne plays air force colonel Jim Shannon, stationed in a remote Alaskan outpost close to the Soviet Union, who is put in charge of the defector. After Shannon flies with Anna to Washington, DC, the two become lovebirds and marry. Shannon learns soon after from the brass that she’s been planted here as a spy and agrees to defect for their honeymoon to Russia as a ploy to see what he can learn about the spy plan. The catch is that back in Moscow, after Anna tasted freedom American style, she no longer believes in the Commie line and the couple fly back to the good ole USA in a stolen MIG. The couple settle down to the good life of barbecues and material comfort in their Palm Springs, California, suburban home, where Janet parades around looking sexy in a bathing suit and Wayne is as proud as a peacock to be living out the American Dream. 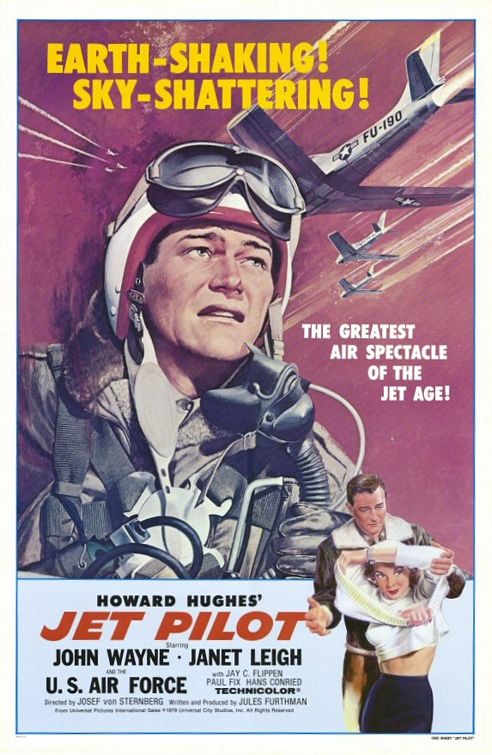