John Sturges (“Joe Kidd”/”Ice Station Zebra”/”Bad Day at Black Rock”) directs with his usual aplomb this slick family vacation horror story, viewed as a tensepsychological thriller. It’s based on a story by Maurice Zimm (originally a radio play, A Question of Time) and is written by Mel Dinelli. StarBarbara Stanwyck contemplated retirement and vacationed for a year in Europe before deciding she was bored and returned to work.

Married couple Doug Stilwin (Barry Sullivan) and Helen (Barbara Stanwyck), with their small son Bobby (Lee Aaker), go on a holiday fishing trip along the Mexican coast and locate an idyllic deserted beach near Ensenada. It’s a place where Doug used to fish with his buddies when he was in the Army. Bobby while exploring a derelict pier gets his foot stuck in the boards. Dad while getting the kid unstuck, falls beneath the rotting timbers and becomes pinned in the sand. His anxious wife takes the car to get help and finds a rope in a nearby ranch. She must hurry to get to hubby before the high tide in a few hours will drown him, but unfortunately at the ranch comes across a dangerous escaped killer named Lawson (Ralph Meeker) who just murdered the Mexican rancher living there. The American convict takes her hostage, as Doug is faced with a race against time for survival. Wifey has to bargain with the killer to get him to help her free hubby by offering to help him avoid the Mexican police’s roadblocks and possibly also compromising her virtue.

Sturges, always the master craftsman, got the most he could have from this routine thriller. The modestly budgeted film turned into a surprise box-office hit for MGM. 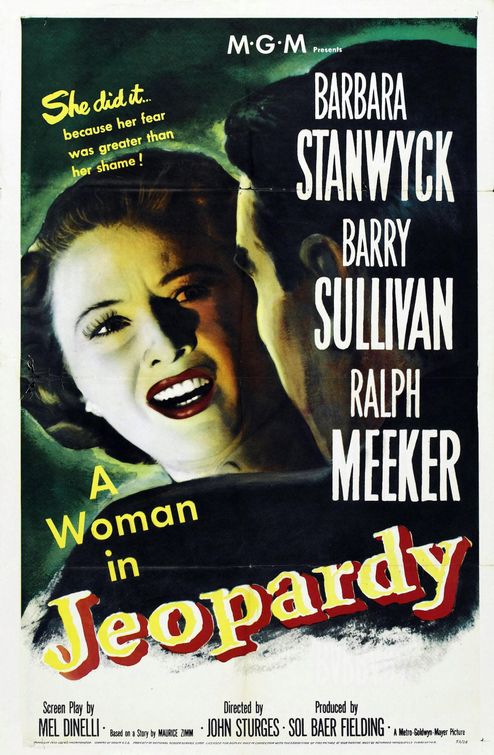