An Elvis Presley pre-Army black-and-white film, his third, directed by Richard Thorpe (“The Student Prince”), who knows rock ‘n’ roll like Elvis knows opera. Thorpe’s expertise is in adventure films and costume musicals, and is unable to adjust and make this one different from the usual MGM stagy musicals. It’s mainly a thinly plotted tale whose aim is to showcase the teen idol and showoff his muscular, at the time, torso. With that limited aim, Elvis rocks. It’s a little darker than other Elvis pics, but still a fun watch. Guy Trosper penned the script; it’s based on a story by Nedrick Young.

It opens in a bar, where an older blonde puts the make on laborer Vince Everett (Elvis Presley). The good natured lad buys her a drink. This upsets her bully husband who rushes over to the bar and starts abusing the woman. Vince tells him to stop and the guy pours a drink over him. That gets Vince all riled up and he accidentally beats the dude to death in a fistfight and gets sentenced to a year in jail for manslaughter (the kid should have gotten a better lawyer, because he didn’t deserve to go to prison). The warden assigns him as a cellmate sharpy prison vet Hunk Houghton (Mickey Shaughnessy), a country singer, who takes the inexperienced kid under his wings and teaches him the ropes. In the slammer the punky kid learns from Hunk how to play the guitar and sing. When he’s cut loose Vince heads to Hollywood and comes under the influence of talent scout Peggy Van Alden (Judy Tyler, in her second film after starring in Broadway’s “Pipe Dream” and playing Princess Summerfall Winterspring on the Howdy Doody TV show; the 23-year-old was killed in an auto accident before the film was released). With the pretty Peggy’s help the bad boy cuts a record and goes from rags to riches, which gives him a swelled head and has him acting surly. We are left to wonder if the Elvis character will get his act together before the end of the third act, after his old pal Hunk punches out his vocal chords for being disloyal to Peggy.

Elvis sings five better than average songs written by Leiber and Stoller “Treat Me Nice,” “Baby, I Don’t Care,” “I Wanna Be Free,” “Don’t Leave Me Now,” and the terrific show stopping title song choreographed by Elvis; he also sings one by Aaron Schroeder & Abner Silver “Young And Beautiful.” Many critics called it his best film, but I prefer Flaming Star (probably the only decent film he ever made).

The film has been deemed important enough to be selected for preservation in the United States National Film Registry. Don’t ask me why. 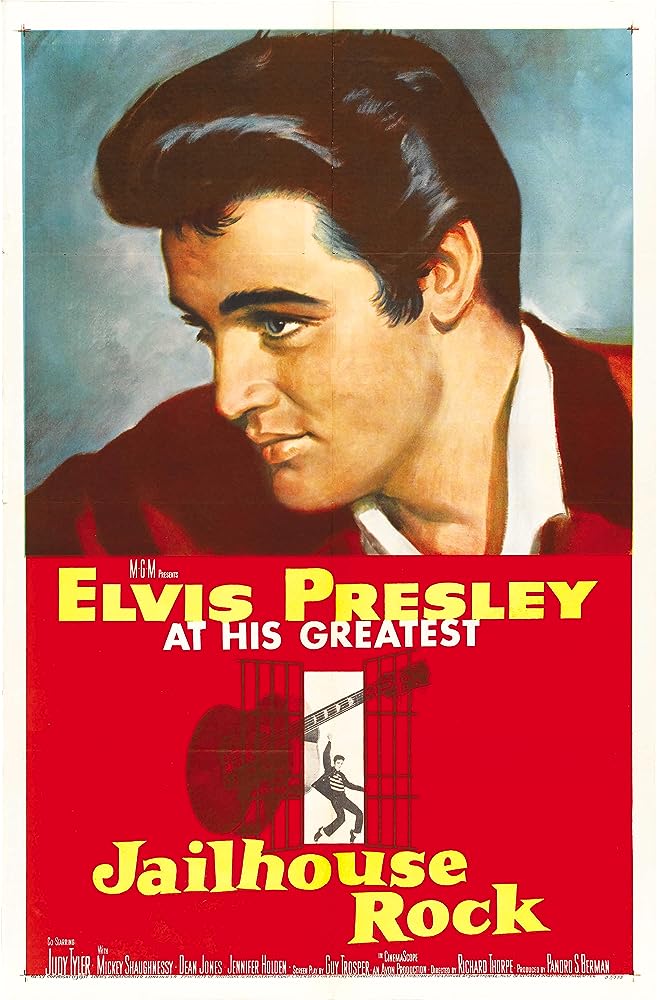