An enjoyable Monogram Charlie Chan mystery, with much trickery disguising who the real culprit is and a very clever premise but one that is not always well executed. Eccentric and absent-minded inventor Harper (Reicher) is working on a secret war project for the government where he can harden wood into a metal. He built a gas chamber to hide his formula plans, as this acts like a spider’s web — it’s easy to get in but not possible to leave. One would get locked in without knowing the voice password which is activated only by Harper’s voice, and therefore would die from either the gas or if having a gas mask would starve to death while trapped. The only two people who know of the chamber and the password are Harper and his trusted butler for the last 15 years, Roth (Delevanti). His assistant, Walter Meeker (Albright), is known for his honesty, but is still not trusted to know any of the secrets. Meeker in return, also, expresses an open displeasure for the loathsome Harper.

On a night that a motorcycle policeman, Jim Kimball, tries to enter the gated house and lab of Harper, Roth also reported to Harper an earlier incident of someone firing a shot on the grounds. Following Harper’s request to maintain secrecy, the cop is not allowed in the house but is allowed to search the outside grounds. But unknown to the others, the real officer is killed and the one who kills him puts on his uniform and sneaks into the house.

It’s discovered that Harper is missing, and the government considers his work so vital they assign Charlie Chan the case. Sheriff Mack is already here and will assist Chan even though he hasn’t a clue of what to do. Only the household guests of Harper are present. It seems that not one of them liked the grouchy Harper, as his sister Louise Harper (Evanson) readily states. She also worked there as a housekeeper, hoping to inherit the house and formula rights some day. Harper’s niece is also a housekeeper, the young and attractive Jean Kent (Warren). Stella Graham (Granger) was a former strong lady in vaudeville and a master puppeteer, who was employed to build a robotic puppet for Harper. Michael (Dorr), a mute, is employed as a handyman and a chauffeur.

When Harper’s body is found on the puppet stage, the autopsy says he died of natural causes but Charlie shows that it was a poison dart inflicted inside his mouth. When Jean is the only one who says she didn’t see the cop in the house, Chan becomes suspicious but is satisfied when he learns that she was secretly dating the cop and Harper never allowed anyone in–so she had to sneak him in the house.

A few more bodies show up dead, and Charlie himself is almost killed by a poison dart. Since there is more than one person involved in the murders, they hide the fact that their victims are dead until they’ve had time to each establish an alibi. This is accomplished through working the corpses like a puppeteer does the puppets, therefore it appears as if the dead person is walking.

In the concluding scenes, Lloyd Archer (Ingram) enters the Harper mansion and proclaims he was cheated out of the formula–that his stepfather Harper stole the formula from his real father. Meanwhile Charlie deduces from the clues who the killer and his accomplice are, as all the suspects are gathered in the living room of the mansion for Chan to solve the case and explain how he did it. Charlie has the broken ear of a jaded mask, and whomever it fits is the murderer.

For the purpose of providing comedy and to be more of a hindrance than in helping him solve the case, Chan’s Number Four Son, Edward (Edwin Luke), and his black chauffeur, Birmingham Brown (Moreland), come to stay with him at Harper’s place. There was a flurry of one-liners, Confusius-like sayings, and some stereotype racial fright humor by Moreland exhibited. It made for an entertaining but not a totally satisfying film. 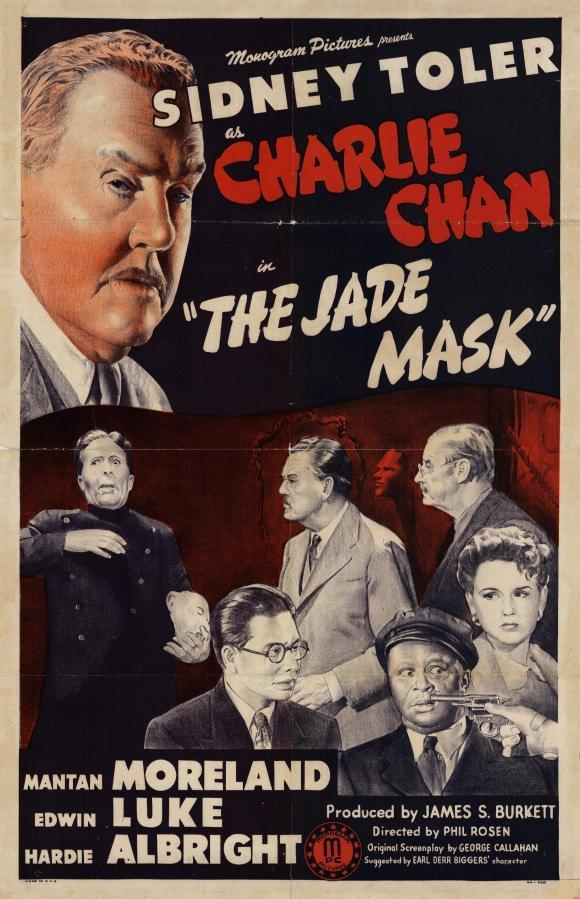