William Seiter does the Universal studio honors of directing in a workmanlike manner the teenage starlet Deanna Durbin in this thoroughly banal musical comedy/romance. It’s adapted from the story by Ralph Block, Jane Hall & Frederick Kohner, and it’s adapted to the screen by Norman Krasna. It’s purposefully pleasant and bland, emotions that help the film land on its feet as a star vehicle you can feel naturally getting into your good graces.

Deanna Durbin was 18 when she made this film. She’s cast as a clawing aspiring actress Pamela Drake, the daughter of renown stage musical actress Georgia Drake (Kay Francis). She gets her showbiz break by lobbying and getting the starring role in an upcoming play based on the life of St. Bernadette, a part her mother was promised. Deanna also chases an older man, John Arlen (Walter Pidgeon), involved with her mom. After the usual formulaic complications of a mother-daughter rivalry are ironed out, the film smokes the peace pipe and ends on a happy note.

Everything flows amusingly along according to plan, with the picture climaxing when Deanna sings “Ave Maria”. Deanna’s other musical numbers include “Musetta’s Street Song” from La Boheme, “Loch Lomond”, and “Love is All.” She does a credible job with all her songs, and if she sang some more we would have all been the better off for being spared from the silly plot.

It was remade in a more saucy manner in 1950 as Nancy Goes to Rio, with Jane Powell and Ann Sothern. 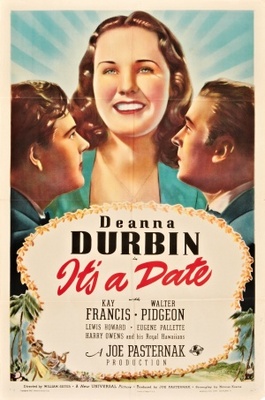