“Biff Elliott is the main culprit when it comes to the poor acting.”

Originally released in 3-D but theatrically shown in 2-D, this is probably the only film noir to be filmed in that method. It also has the distinction of being the first film version of a Mickey Spillane novel. It was written and directed by Harry Essex in an unappealing way, even though he cleaned up much of the novel’s sadism for the movie.

Jack Williams (Swanger), a wartime buddy of Mike Hammer (Biff Elliott) and an amputee and currently an insurance investigator, is shot full of lead by an unseen shooter in his apartment as he unsuccessfully crawls to his gun while in the background one hears “Hark, The Herald Angels Sing.” Hammer swears to his friend, NYPD Captain Pat Chambers (Preston Foster), that he’ll get the killer before some shyster lawyers get their hands on the case and whittle down the sentence. Pat warns him to let the police handle the case, but nevertheless he goes out of his way to help the shamus.

For Hammer all those present at the party Jack gave, prior to the murder, become suspects. Myrna Devlin (Osborne) is Jack’s fiancée, who has a criminal record for jewelry theft and is a former heroin addict. She met Jack when he was a cop and snitched out the jewelry gang, and she now loves Jack for getting her life straight. George Kalecki (Reed) grew up in the Bronx and through crooked enterprises has risen to much wealth as the head of a crime organization, and is living now in upscale Westchester County and building up a serious art collection as he aims for respectability. He’s involved with promoting fighters, a jewelry theft ring, narcotics, and the numbers racket. George’s obviously a prime suspect. Charlotte Manning (Peggy Castle) is a psychiatrist who uses hypnoses to get her patients to talk. Many at the party were her patients, including Myrna. Some of the others were: the Bellamy twins (Tani and Dran Seitz). They are love-starved nymphets, with Esther being a champion rifle shooter and Mary being mentally unbalanced and sexually forward. Mary makes use of a long back scratcher to substitute relieving the itch she has for Hammer, when the shamus takes a pass on her advances. Another patient was Hal Kines (Cunningham) who works a racket at the college where he lures naive girls to work for him, and one of the girl’s he enticed to runaway with him was Eileen Vickers (Anderson).

Hammer’s path is strewn with corpses, but the $64 question remains who killed Jack and why. During the course of his unorthodox and politically incorrect investigation, Hammer beats up a few suspects and also gets beaten up several times by thugs. The shamus is a brawn over mind kind of guy, whose only diversion from the hunt comes as he romances the hot blonde shrink. Otherwise he’s humorless, only having wise guy relations with the elevator operator and his loyal assistant Velda (Sheridan).

The film’s best scene is the climax when Hammer has a gun pointed at Charlotte, who begins to strip as she admits to the killings. Her aim is to take over the organization she learned about by hypnotizing her patients and reap in the enormous wealth gained from such illicit activities. She then pulls a gun out of one of her houseplants while attempting to make love with Hammer, but Hammer plugs her first. Before she dies, she asks: “How could you?” He says in his laconic tone, “It was easy.”

The film was lucky to have the great cinematographer John Alton cast his magic noir shots to give it at least a moody look, but because of a limited budget Alton couldn’t shoot the city Christmas scene on location and had to instead just show some Christmas cards to capture the city’s seasonal spirit. Alton couldn’t save this dull film from the poor acting, the risible dialogue, and the lame script. Biff Elliott is the main culprit when it comes to the poor acting. He had no presence and made his macho character into an unconvincing brute, someone devoid of a personality. The actresses were all bosomy stereotypes, including Peggie Castle, Margaret Sheridan, Frances Osborne, Mary Anderson and those riotous twin sisters Tani and Dran Seitz. 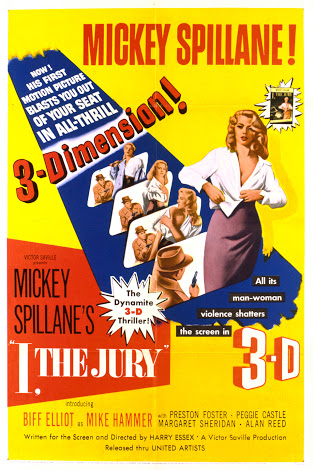