I SPIT ON YOUR GRAVE (DAY OF THE WOMAN)

“A classic in stupid and revolting filmmaking.”

A classic in stupid and revolting film-making that has no redeeming social value, but is not “the most disgusting movie ever made” as claimed by film critic Roger Ebert. In fact it just might have been the best date movie ever, in a perverse manner of speaking. But the subject matter of rape is too delicate an issue with serious implications to be taken lightly and handled in such a dehumanized way as it is here. It probably takes a twisted mind to consider such trash as a guilty pleasure treat, as one of those bad B-films that is laughable because one of the rapists is a slow-witted nerd. But then again, each person must find their own taste in films and banning films is not the way for a free society to go–as happened to this flick after Ebert got on his high horse and ravaged it as unwatchable. Yet I found not one single thing I enjoyed or admired or needed to see, or any reason to recommend it except as a shocker that has a buzz about it among certain cult-horror freaks that should be commented on.

If you think it’s an honest portrayal of a gang rape, there seemed no evidence of that as all the undeveloped characters acted out the rape as a means of shocking the viewer and offered nothing else. Also the rape was disgusting but not realistic, while the revenge part was totally unbelievable and even debased the victim further by admitting a need for violence as a response. It’s also hard to consciously say you could overlook the ugly content as a woman is degraded and violently raped for half an hour and still think of yourself as someone cultured or a humanitarian, when there’s nothing more to the rape plot than as a means of exploitation. It remains unforgettably forgettable as a cheesy horror B-film about a rape-revenge. If Meir Zarchi’s vile story line and gloomy presentation of the mise en scéne and amateur directing weren’t bad enough, the limp acting is its crowning achievement in bad film-making.

Aspiring novelist Jenny (Camille Keaton, grandniece of Buster Keaton) leaves her NYC haunts to rent a house in the secluded upstate Connecticut country for the summer to write her first novel. Inspired by the serene river that runs near her house while lounging on her hammock in the shade, the writer is taunted by two country bumpkin slackers in a motorboat who purposely ride near her as their motor makes too much noise and forces her to retreat to the house. Later these same two meatheads return using a rope to pull Jenny’s canoe and force her into the woods. There they are joined by their ringleader, the older, married, women hating, doltish gas attendant Johnny, who is wearing his marine hat while he brutally rapes her as she’s screaming and held down by the others. The guys bait the retarded grocery delivery boy Matthew to lose his virginity, as after some booze he gets atop her limp body but proves impotent. The rape is prolonged as the young men let the battered nude redhead escape through the woods, where the harmonica playing Andy catches up with her and brutally does her from behind while she’s slumped over a rock. This is followed by the other Deliverance-type of yokel, Stanley, slapping her around and ramming a bottle up her private part while she’s on the floor of her house. Concerned that she will tell, Johnny gives Matthew a butcher’s knife and orders him to kill her. Matthew can’t get up enough nerve to stab the unconscious Jenny in the heart, but he tells his pals he did–fearing they would dump him as a friend otherwise.

A few weeks go by without word of a body found, as the gang wonders if they should go back to the scene of the crime to investigate. Instead of calling the police, Jenny plans her sweet revenge. The last half an hour is about her seducing two of the rapists and exacting what goes for a feminist fantasy revenge against such brutes. She hangs one of them from a tree while he’s sexually aroused and castrates the other in a bathtub after giving him a body rub. Then she locks him in the bathroom while he bleeds to death and she goes downstairs to listen to an opera record ignoring his screams of pain. The other two rapists are cut down by their own motorboat and are left to bleed to death in the water. No reason is given for why Jenny went on this rampage, or was anything revealed about her that showed she was anything but used as a plot device. But if it’s a recognition that one violent act deserves another, then those who share that Old Testament biblical “eye for an eye” sense of justice have found themselves a film to crow about. 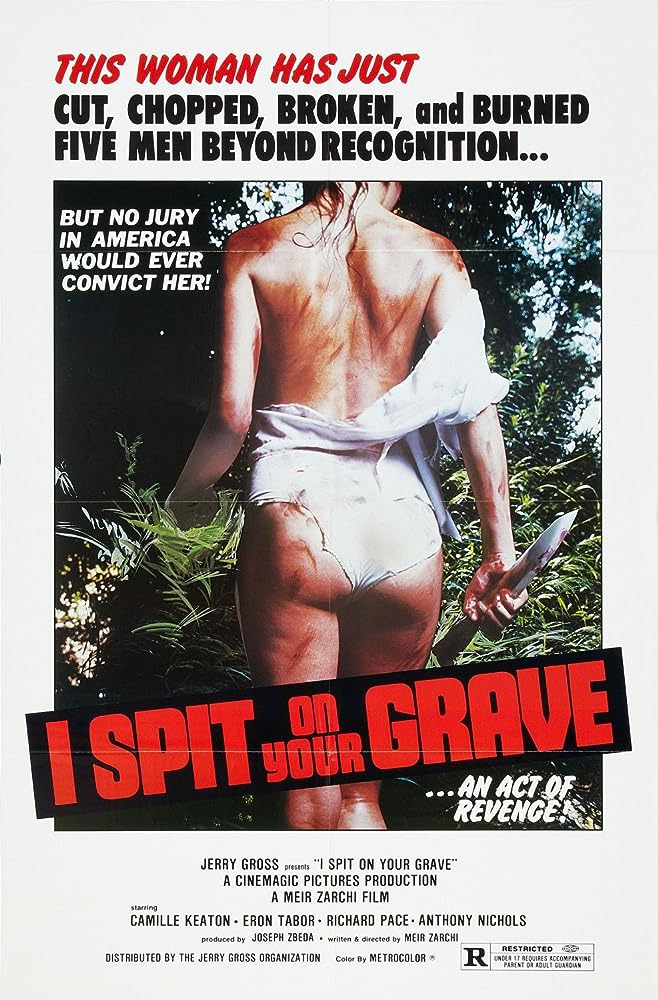