“It acquits itself well as a moving old-fashioned drama and a throwback to how indies first blossomed a generation or so ago.”

Islander was screened at the 2006 Los Angeles Film Festival and at the Williamstown Film Festival, where I saw it. It’s a low budget indie by writer-director Ian McCrudden (“Trespassers”/”Mr. Smith Gets a Hustler”), with cowriter Tom Hildreth asproducer/co-writer/star. It fictionalizes a true story and changes the background to a lobster fishing setting. The film was shot in three and half weeks in the summer of 2005 on location on the Maine harbor town of Rockland and the island of Vinalhaven (Hildreth is familiar with the island from his childhood); it was shot on a Sony HD and a Mayco head was used for the water shots to keep it steady, the results are a beautifully shot film. It’s a sharply told and well-acted moralistic melodrama about a lobster fishermen who has to reexamine himself when he loses everything he loved and seeks redemption. It’s set along the stunningly beautiful Maine coast, using many of the natives in supporting roles to give it a strong sense of place and authenticity. Everyone has a proper Maine accent and looks as if they belong, and the simple story is always credible while its outcome doesn’t depend on making a big final splash.

The film neatly has a beginning (the hero’s mistake), middle (his punishment) and an end (his redemption). The opening shows cocky native Vinalhaven lobster fishing man Eben Cole (Thomas Hildreth) happily married to outsider sexy wife Cheryl (Amy Jo Johnson) and with a young daughter Sara he dotes on. The hotheaded Eben is upset that commercial fishermen from the mainland are invading the fishing territory reserved for the locals (fishing rights are passed down from father to son) and that because of that his catch is dwindling. He builds up into a rage and goes against the advice of the other local fishermen, including his dad Ben (Larry Pine), who tell him not to cut their tackle gear and let things take its course. When he takes action he’s all alone pointing a rifle at a mainland boat trespassing in his territory. As a result things get out of hand and the fisherman’s young son accidentally goes overboard and drowns. The coast guard arrests Eben, his boat is confiscated and none of the fishermen, including his dad, back him. Because he doesn’t have the money to get a good lawyer, he gets an uncaring public defender (Ron Canada) from the city and he’s forced to accept a plea bargain agreement that lands him five years in the clinker. During that time his father never visits and dies of a stroke, Cheryl forbids Sara from visiting and divorces him, his first mate Pokey (James Parks) now works for his rival Jimmy (Mark Kiely) and his dad auctions his boat and truck to support his son’s family. The only thing Eben has left when he’s released from prison is his home, as his supportive mom kept up with the payments. But to show how coldly Eben was treated by this close-knit community, there’s “killer” written on the outside of the house. Cheryl has moved in with Jimmy, and there’s no work fishing for the hard-pressed Eben. To show even further how low he has sunk, the only work he can get is on land in a junkyard. The sympathetic boss (Dick Barron) feels for him because his son did a year in the slammer and it changed him completely–so much so he couldn’t stay on the island and fled to the city. The third act sees the island’s old codger, a shipbuilder and fisherman, Popper (Philip Baker Hall), take Eben under his wings and give him part-time work fishing on his boat. His advice about letting things go is listened to, and though things can never be the same Eben has matured and realizes he had made a big mistake but can start over. A warm relationship develops with the island’s new doctor Emily (Judy Prescott) he meets during a junkyard accident, who is also divorced and has a well-mannered and intelligent teenage son named Wyatt. Though Emily comes from a wealthy Boston family, she vacationed here as a youngster and fits into the community very well. In the conclusion a lot of things do get tied up neatly but the filmmaker leaves some things that can’t be tied up, such as Cheryl leaving the island after a dispute with the brutish Jimmy and taking Sara with her. That’s a heartbreaking moment for both father and daughter, as she’s clearly daddy’s girl and it is indicated that his absence will most probably cause some problems down the road for her development.

It’s a classic story that’s very well-crafted, intelligently scripted and except for a few lags in pacing, some thrown in contrivances and a few too many filler stories, it acquits itself well as a moving old-fashioned drama and a throwback to how indies first blossomed a generation or so ago. 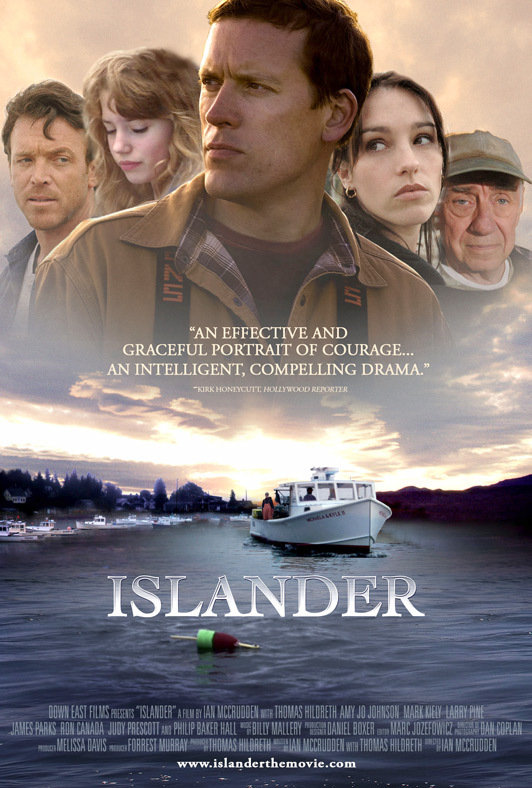