“As one would expect, Meryl Streep delivers a brilliant technically perfect performance as Lady Margaret Thatcher.”

As one would expect, Meryl Streep delivers a brilliant technically perfect performance as Lady Margaret Thatcher; but that’s not enough to compensate for the biopic so carelessly glossing over her political career, being so fuzzy about the politics, the bland direction by Phyllida Lloyd (“Mamma Mia!“) and the soft-edged screenplay by Abi Morgan. If you wanted a laundry list of The Iron Lady’s accomplishments and a somewhat humanizing presentation of such a controversial and divisive monster figure, you got it. But if you wanted a film with more gravitas and more hard-hitting political insights, that’s not the case.

It begins with an elderly, doddering, world-weary and long retired ex-Prime Minister, Margaret Thatcher, living alone while cared for by servants in her comfortable but far from luxurious Chester Square home in London, where she deals with the death of her loyal husband Denis (Jim Broadbent) by talking to him as a ghost long after his death, fretting about the changing world, and that one of her twins is living faraway in South Africa. Through flashbacks we follow how this obstinate grocer’s daughter went to Oxford and in 1959 took a seat in the House of Parliament as a Conservative and through her ability to be unflappable and stick to her hardline conservative principles became the only female Prime Minister of the United Kingdom. Her rigid economic policies (deregulation, mass privatization, and decreased public-service spending) aimed against the working-class and putting the blame on the unions for the country’s ills, made her initially an unpopular figure with the masses. While in office as the P.M., she harshly dealt with the miners’ strike of 1983, the IRA bombings and, at last found her footing with the people in her successful war effort in 1982 against the Argentina Junta who invaded the Falkland Islands. The war resulted in a quick victory and brought about a renewed patriotism in Great Britain that made her a popular figure. She got the nickname of the Iron Lady for her tough stance against the Soviet Union, but her popularity diminished when she introduced the unpopular poll tax (in Scotland in 1989 and in the rest of the country a year later) and this led to her resignation. Thatcher remained in office for 11 years (1979-1990).

Alexandra Roach does a terrific job as the wide-eyed young Maggie Roberts; while Harry Lloyd is appealing as he plays the supportive young businessman Denis Thatcher, who marries Maggie Roberts and encourages her to run for office. Carol Thatcher, Margaret’s testy and caring twin daughter, is finely played by Olivia Colman.

Though the overall acting is quite good, the film fails to be inspiring, informative (it leaves out or brushes too quickly over too many events that made the P. M. so disliked) or anything but a safe middle-brow work. But, it’s probably worth seeing, just to see the American actress Streep hit another one out of the park–this time for the Brits. 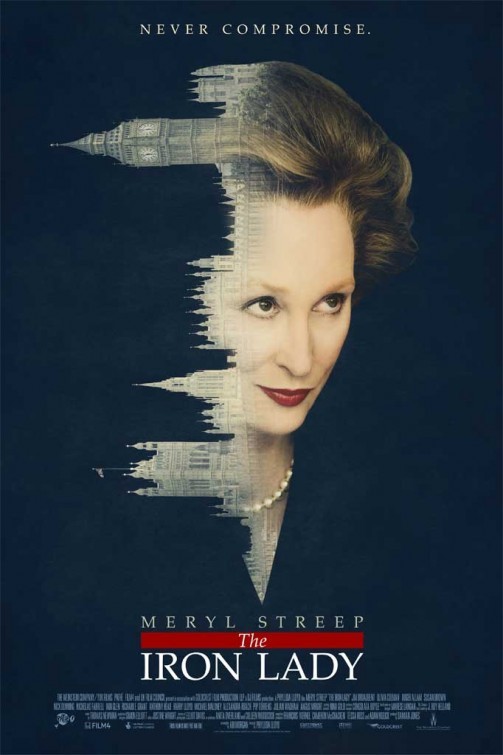