Alex Proyas (“Dark City”/”The Crow”) directs this sci-fi thriller about robots in revolt. The screenplay was by Akiva Goldsman and Jeff Vintar. It was inspired by the short stories in Isaac Asimov’s nine-story book called I, Robot. Though the premise has the interesting theme of conformity versus individuality, it settles for being your typical CGI action-packed summer blockbuster. Not willing to be more than routine, it allows its centerpiece action scene of the revolt of the slave-like robots against their human masters to be settled almost single-handedly by a hero homicide detective. The familiar type of crime genre protagonist acts to save the world from the attack that everyone doubted but him, as he’s chased and hunted down by the robots gone amok (a Kubrick-like warning not to place all your bets on technology to save the world). In this loose adaptation of Asimov’s sci-fi thriller, corporate greed, terrorist subversion, and philosophical questions about man’s free will and his ability to relate with others are scrutinized. Though those provocative thoughts are seamlessly woven into the story, the film about technology going bonkers ends chaotically without serving any tangible purpose. It’s a flimsily sketched psychological sci-fi movie that never feels more than being robotic. The acting was either wooden or cartoonish. What is pretty to look at, is the set design city created by art director Patrick Tatopoulos.

It’s 2035 in Chicago, and the robots perform menial chores replacing human workers in activities such as house cleaning, bar tending and delivering FedEx. The world’s richest man is the CEO of U.S. Robotics, Lawrence Robertson (Bruce Greenwood), who updates a new state-of-the-art version of affordable robots with the hope they can be in every home. Detective Del Spooner (Will Smith) has a phobia about robots and hates them so much he doesn’t trust them even though they’re guaranteed by three laws to always be willing to serve and be protective of humans, and never harm them.

When Dr. Alfred Lansing (James Cromwell), the creator of the robots and co-company head, is found dead in the lobby of his office building after leaping from his office a few floors up, he leaves a message via a hologram that he wants only Spooner to investigate his death. Spooner’s belief that there’s a rogue robot who is the killer among the many recently manufactured updates is written off by Robertson and Spooner’s police boss Lt. Bergin (Chi McBride) as crazy talk. Dr. Susan Calvin (Bridget Moynahan), Lansing’s trusted psychologist associate and the one in charge of programming the robot psyches to make them more human, finds it impossible to believe a robot would break the three laws. I found it nearly impossible to believe she was not herself a robot in her robot-like performance. In any case all the rational parties concerned believe it’s just a case of simple suicide, even the divorced cop’s folksy sweet potato pie baking granny (Adrian Ricard) believes her grandson should just chill out and go with the flow. But the nosy wisecracking detective who nostalgically favors things from the golden days of 2004 such as Converse sneakers, on further investigation, discovers the robot who killed his creator answers to the name of Sonny (the voice of Alan Tudyk). He’s a unique humanoid robot that Lansing created with emotions and fears, and the ability to dream and override the three robotic laws. After Spooner’s discovery is verified by the psychologist, the cop is under attack from a swarm of other harmful intending robots notable by glowing red lights in their chest. They attack Spooner in a super underground highway, as he shoots as many of them as he can and moves the film into a James Bond fantasy land of disbelief. The film in its disappointing conclusion turns into an ambiguous mystery story about who is responsible for organizing this nifty robot attack against their authority figures. Except for a few bright moments, this film fizzled. The cleverest scene had Spooner chasing a robot he thinks is a purse-snatcher, as he assumed a robbery was going down because of his projected hatred for robots. This was smoothly related to modern day typecasting of criminals according to perceived racial biases. 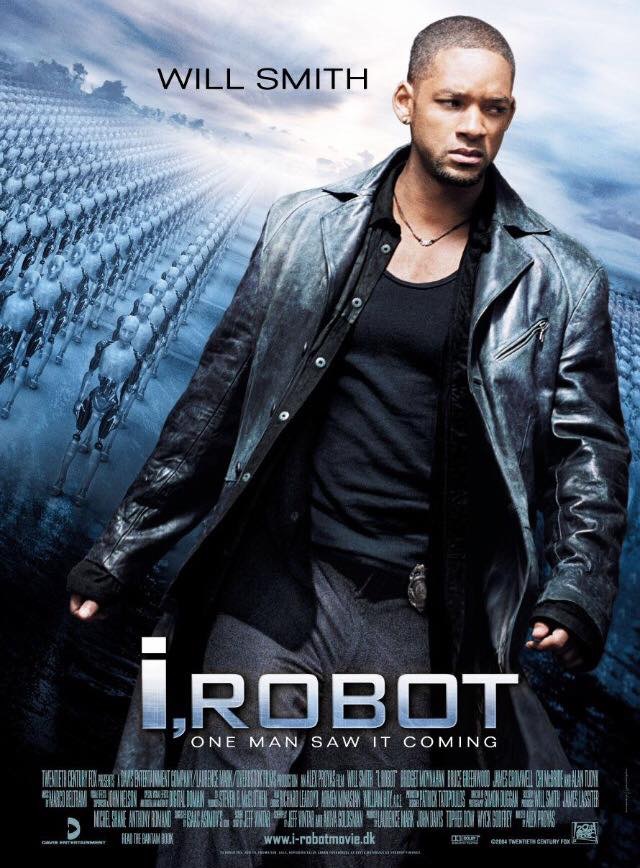