“Love of film is the magical point.”

There is no reason in the world to take this delightful farcical film seriously, that is, unless you are cast in the role of a neurotic director Rene (Leaud), who by the end of the film cracks up and can’t finish it. His one great line is, “This film is not a game–it is very important.” He was once a great film director known to be temperamental but is now on the rebound after his career went to pot, though he still retains his tempestuous moods. He is remaking a 1915 Louis Feuillade silent, Les Vampires. He has cast the vivacious Hong Kong movie queen Maggie Cheung as the film’s star, even though she speaks no French. He wishes to make this into a silent black-and-white film, having Cheung dress in a slinky tight latex outfit like Michelle Pfeiffer did in Batman Returns. He will have her be a cat burglar, slinking through the dark and forbidden streets of Paris, stealing jewels.

Cheung is the outsider, the star of Hong Kong action films, through whose eyes we will see the film. Everyone she meets on the set is uptight, rather bitchy, and nervously smoking, while she is polite and bewildered as she greets them by trying not to offend anyone. Later on she goes to a film party with some journalists who attack how dull French films are, claiming that they are made only for an elite audience. The members of the production crew, on the other hand, only complain about personal things how everything is screwed up and tense for them, that they are at the mercy of the director’s whims.

The heart of the film is an exploration about what makes a film good. The most interesting comment by the journalists, is that the French films are too intellectual for their own good… ummm! Cheung, meanwhile, stays aloof from this discussion, trying to concentrate on her role in the movie, as the cinema verite technique is employed most enjoyably to show the movie people interacting with each other.

The frenetic costume designer, Zoe (Richard), likes girls and develops a crush on Cheung, but is scared to tell her. So her friend Mireille (Bulle), the wife of one of the movie men, comes to her rescue and tells the embarrassed Cheung this, which Cheung handles very tactfully.

We get a good idea of what is going on during a shoot, and it seems like bizarre fun. Through Cheung’s eyes we decide who we really like and who we don’t, but we are aware that she is always discreet saying as little as possible about what she really thinks.

An odd scene, but a fairly powerful one, shows Cheung back in the hotel, dressed in her slinky costume, really getting into her part, even to the point where she tries to act out her part for real, by robbing the nude woman (the Canadian director Atom Egoyan’s voluptuous wife, Arsinee Khanjian) of her jewels while she is arguing on the phone with her boyfriend.

There is some pretty good stuff in this anti-film film that is both funny and revealing about how the people who make films can often be hypocrites, faking their work, making it appear as a work of art. What makes the film come together and work so well, is that you actually believe this is the real thing and that you are on the set making the picture with these people. The finale with the disgruntled and limited director, Jose (Castel), coming in to replace Rene and firing Cheung, is truly a funny scene.

Irma Vep turns out to be an anagram for vampire. Indeed, this is a very clever idea for a film, whose love for film is shown by the filmmaker in a resourceful way. And, love of film is the magical point of the film. This is clearly seen in the final silent footage scenes from the robbery with Cheung clad in black latex, which was shot by the dismissed director. These scenes are homages to the love he felt for the actress and the part she was playing. That was pure cinematic magic. 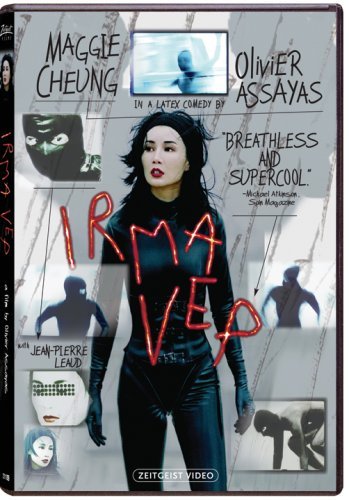