“It was an emotionally draining film…”

“Iris” is about the life of renown philosopher and novelist of some 28 books, Iris Murdoch. The film is based on John Bayley’s books, “Elegy for Iris” and “Iris: A Memoir,” which have been adapted for the screen by Sir Richard Eyre and Charles Wood. Sir Richard is a noted former British stage director of Britain’s Royal National Theater and the writer Charles Wood wrote Help and The Knack. It should also be noted that Sir Richard’s mother suffered from Alzheimer’s disease, and he directs those heart-moving scenes involving Judi Dench as an Alzheimer victim with sensitivity and without sentimentality.

What both director and screenwriter lack is an ability to make this grim story more inspiring. What they got right was that they honestly showed the suffering and tragedy Iris had to endure in her later years until she died in a nursing home from Alzheimer’s in 1999. The filmmaker also painted a wonderful picture of a lasting marriage, where the loving couple were in perfect harmony with each other.

The film asks questions about what to do about a loved one who is not able to function anymore and the burden it causes on one’s partner. It touches on intimate details of Iris’ and John’ personal lives — of their exuberant Oxford days in the 1950s when they first met and later married, of her infidelities which threatened the marriage, and, in her later years in the 1990s, being cared for by her loving husband when she has Alzheimer’s and is completely dependent on him. But, it never gets to reflect on her ideas or what made her such a great writer. There was so much material to cover in this biopic of one of the more interesting personalities of the 20th-century, and what to put in and what to leave out is crucial to what the film ultimately has to say. What was left out was her career work as a novelist which led to her celebrity. When the film tried to put something in about her work, it failed to do it with any cohesion.

The technique used to tell Iris’s story was to swing back and forth between her glorious past and her unfortunate present–the aim being to have a balancing act between the happy days of her longing for pleasure and language and the sad days when she lost both longings. The film was fortunate to have Winslet capture what Dench is now missing as far as intellect, an ability to think, to use words, to glow in her good looks, and feel rejuvenated by her libertine attitude. The film cautiously hints at her lesbianism and free love with many men as it quickly leaves those episodes in progress and springs to Dench and her present condition before giving the viewer much details about those affairs. It also shows by these parallel shots how their orderly cottage became cluttered in their later years–symbolic of the burden the disease was on both of them. It also brilliantly showed the onset of the disease where she can’t help repeating herself and at one point writes the word puzzle three times in consternation over what the word means. Then follow those incidents of her public humiliation where she forgets what she is saying during a BBC broadcast.

The disease rapidly took possession of her — what we care to remember was the vitality she had as a youth. She made the more timid and socially awkward John burn with jealousy as her striking beauty attracted others as well as made him burn with passion for her creative life-force–he fell in love with her mind. Dench can at times still capture those youthful free-spirited recollections by just a blank stare into space and a half-smile that creases her face. The film shows this visually in symbolic form, and I might say in a heavy-handed manner, with the liberated Iris skinny-dipping. The camera zooms in on her swimming to show both her once bubbly nature and now the deterioration of her mind.

This film is elevated above the conventional and at times PBS plodding way it was filmed by the truly masterful performances of the four stars. Jim Broadbent is John Bayley, the Oxford Professor, esteemed literary critic, and older absent-minded husband of Iris. Hugh Bonneville is the young Bayley; Judi Dench the older Iris; and Kate Winslet the young Iris. Dench’s mesmerizing and soulful depiction of the writer’s pitiless descent into the semidarkness of Alzheimer’s was a particularly brilliant performance. The acting by Dench comes through a cold stare, an expressive look around the room, and through her subdued interior performance. For this Dench has been nominated for an Oscar as Best Actress and Winslet as Best Supporting Actress and Jim Broadbent as Best Supporting Actor.

Broadbent, Iris’ husband for some 40 odd years, still has the look of bemusement that led the deliciously intellectual Iris to choose him for her mate. Even with Iris now being hopeless company, she can still tease his sensibilities and bring out a need in him to tell her jokes and stories.

One of my favorite scenes is when toward the film’s end a taxi driver (Marcus), who does not look like he could be a receptive person, gently helps the incapacitated Iris and befuddled John into the taxi and makes the life-changing ride to the nursing home bearable. The humanity of those unselfish gestures is what I think Iris stood for and what she was all about.

Though I would have liked to know more about Iris Murdoch as a writer, the film just couldn’t widen its scope beyond depicting the intimacies of a dotty husband and an intellectually commanding wife and how John is burdened with caring for his helpless wife after her misfortune. Nevertheless, despite the lack of artistic merit in the script and in the less than scintillating direction, I feel quite satisfied that I saw a relevant take on parts of her life that couldn’t be acted any truer. It was an emotionally draining film, but one worth seeing for the realistic way it depicts a victim of Alzheimer’s disease. Regrettably, I must admit that I haven’t read any of her books. But on a suggestion from a friend I think, as a starter, I will read “A Severed Head.” 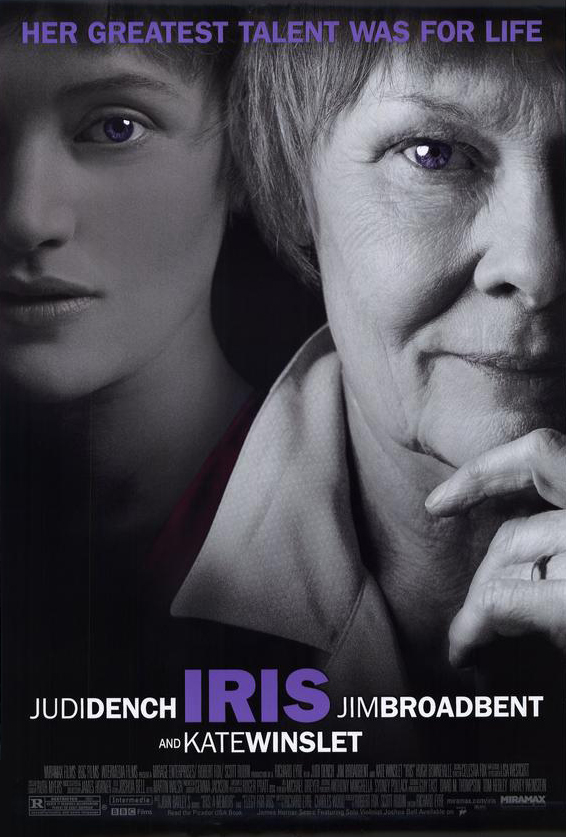