“A talented cast, headed by Irene Papas, give first-rate performances and do wonders with this stirring ancient drama.”

Based on the classic Greek tragedy of Euripides (485-406 BCE), Michael Cacoyannis’s (“Electra”/”The Trojan Women”) film is both stunning and moving. A talented cast, headed by Irene Papas, give first-rate performances and do wonders with this stirring ancient drama.

Helen, the wife of King Menelaus (Costas Carras) of Sparta, is abducted by Paris, the princely son of Troy’s King Priam. Menelaus’ brother, King Agamemnon (Kostas Kazakos), becomes the head of the huge Greek army that seeks to retrieve Helen, whose sister Clytemnestra (Irene Papas) is the wife of Agamemnon. The Greek army is about to set sail to do battle, but the winds refuse to blow and they are getting impatient. Their leader of leaders, the ambitious King Agamemnon, seeks to feed the army to keep them happy, but while his men are killing the sheep of the holy man from the temple of Diana he accidentally slays a sacred deer. The word comes down from Calchas, the chief soothsayer of the Greeks, that the oracles call for the sacrifice of his first-born daughter Iphigenia (Tatiana Papamoschou) as punishment from the gods. The cuckolded Menelaus talks his brother into going through with the foul deed, or else the winds won’t blow, Greece will be denied victory, and the army will take their disappointment out on the brothers. For the benefit of Greece and to satisfy his ambitions, Agamemnon decides to go through with the sacrifice. He uses the ruse of arranging the marriage of Iphigenia to the noble warrior Achilles (Panos Mihalopoulos), without his knowledge. Clytemnestra disobeys her husband’s instructions and escorts Iphigenia from their home in Agros to the wedding in Aulis, the site where Agamemnon and the thousand man army await to set sail. When there a slave messenger hopes he can undo the evil deed by telling both Achilles and Clytemnestra the truth. The noble Achilles bravely tries to stop the sacrifice by agreeing to the marriage, but the army will not listen. Clytemnestra begs her husband not to go through with it, but he refuses to listen. Realizing that her death is inevitable, Iphigenia bravely walks up the hillside steps to the sacrificial altar dressed in her wedding dress, saying death will be a wedding, and forgives her father. Just as she enters the altar the winds begin to stir.

The film brilliantly captures the stark tragic mood of the myth and shows this classic Greek theater production in a memorizing way that’s never before been realized on the screen as powerfully as it is here. 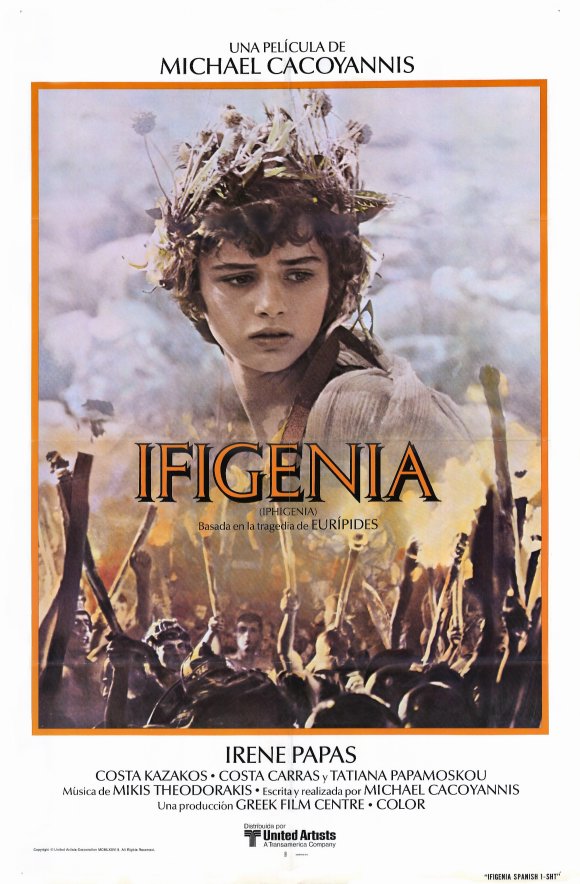