“A very good sequel to “The Invisible Man (33),” though not as imaginative as the original.”

A very good sequel to “The Invisible Man (33),” though not as imaginative as the original. Vincent Price plays Geoffrey Radcliffe, a wealthy owner of a mining company and sponsor of a humanitarian research-medical facility on the premises. He has been framed for murdering his brother nine years ago and is about to be executed in two hours. He is visited in prison by Dr. Frank Griffin (Sutton), the brother of the original Invisible Man genius scientist who invented a formula to become invisible, and he uses his brother’s serum to inject his benefactor Geoffrey Radcliffe so he can escape from prison undetected. He will now try to find the real killer, and in a race-against-time Frank will try to find an antidote. One of the side effects of the invisible serum is that if he can’t be returned to visibility, madness will occur at any time.

Geoffrey’s beautiful fiancée Helen Munson (Nan Grey) meets him in the reclusive gamekeeper’s house where he can be seen because he is dressed with sunglasses and bandages wrapped around his head and is wearing clothes that Frank gave him. He bemoans his fate and vows to get the killer, and she reaffirms her unrelenting love for him. But a barking dog gives away the hideout, as a snooping policeman uncovers that there is someone in the house. When Scotland Yard Inspector Samson (Kellaway) arrives at the scene he already knows about the scientific work of Griffin’s deceased brother and his experimental serum, and realizes that he is after an invisible man. In an amusing scene, despite the use of cigar smoke as a detector, Geoffrey escapes undetected from the house and the police are reduced to putting a tail on Helen and Frank.

Geoffrey’s cousin Richard Cobb (Hardwicke), sporting a villainous mustache, is secretly pining for Helen. He comforts her and tells her he wants to help, if he only knew where Geoffrey was he will send him money. Cobb benefited from the death of Geoffrey’s brother and Geoffrey’s prison sentence, and his expected execution means that he will not only run the mining company but upon Geoffrey’s death will officially inherit it. Under Cobb’s rein, the miners are disgruntled as a former watchman in the mining company, a Mr. Willie Spears (Napier), now is the cruel and ignorant supervisor, chosen by Cobb to oversee the workers.

The search for the killer was too obvious to be interesting, but the fun to be had was when the side effects to the serum kicked in and Geoffrey became egomaniacal. In a family supper scene with Frank and Helen he declares, “I want worshipers not friends — I will reward them for their loyalty.” There is also a great special effects scene, where the police have him trapped in Cobb’s house and use smoke bombs to try and detect him. The film received a nomination for a Special Effects Oscar in 1941. 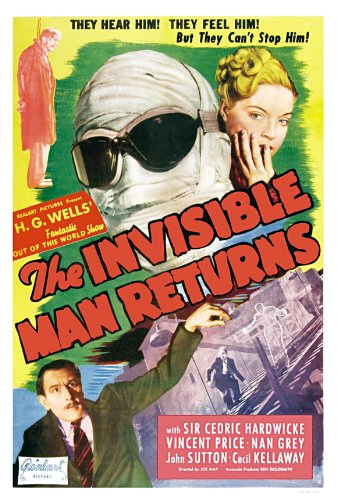