“It’s one of those laughable and forgettable cheapie films that should be appealing to cult fans and those viewers who can never get enough of Bela.”

One of the nine films Bela Lugosi made for Monogram’s Sam Katzman after his Universal days. This popular Poverty Row horror story is so ludicrous that the only marvel is on how director Joseph H. Lewis (“The Big Combo”/”A Lawless Street”/”Arizona Cyclone”) made it workable. Lewis provides his usual great visual effects to his B films, in this case keeping things spooky. But this one is so bad that even the title is misleading, since there’s nothing supernatural about it. It’s one of those laughable and forgettable cheapie films that should be appealing to cult fans and those viewers who can never get enough of Bela. This incredibly poorly constructed script is written by the husband and wife team of Al and Helen Martin.

Bela Lugosi plays Charles Kessler, a kind, wealthy and respected aristocrat physician who lives in a vast gothic mansion with his daughter Virginia (Polly Ann Young) and servants. He’s still grieving the loss of his beautiful but unfaithful wife (Betty Compson), who several years ago died in a car accident. Once a year, on the day of their wedding anniversary, he pretends his wife is alive and his loyal Negro butler Evans (Charles Muse) serves the imaginary Mrs. Kessler a meal by candlelight with Charles making small talk to her. Charles seems a bit balmy over her loss, even though her adultery with his best friend at one time made the front pages of the local papers. Unknown to him is the fact that his wife is alive and while in a state of amnesia is secretly being cared for on the grounds of the mansion by the gardener Jules Mason (Ernie Adams), who for some reason thinks its best to keep it a secret (I guess his expertise is just in flowers!). The traumatized and guilt-ridden Mrs. Kessler fears telling hubby she’s alive because she’s no longer beautiful and fears he will kill her because she’s such a bad person. She appears from time to time under his window and her appearance hypnotizes him and he becomes homicidal. A number of people in the house are victims of strangulation, where no fingerprints are left (please, don’t ask why!) so that the investigating police lieutenant (George Pembroke) makes no arrests. But when the new maid Cecile Mannix (Terry Walker) is killed by Kessler, who is in a trance and has no idea of his foul deed, the murder is blamed on Virginia’s boyfriend engineer Ralph Dickson (John McGuire). He’s convicted on circumstantial evidence after it’s learned that he threatened his former girlfriend Cecile not to tell Virginia about their relationship and spoil his chances of marrying the rich and beautiful Virginia. After Ralph is executed his twin brother Paul (also played by McGuire), who never did anything to support his brother and prevent his execution, suddenly shows up and surprises the Kesslers, since they never knew Ralph had a twin. Evidently Virginia and her Ralphie didn’t talk much about family matters. In any case, the courtly Charles insists Paul stay as a houseguest and help clear his brother’s name by finding the real killer. When the murders continue and the prize portrait of Mrs. Kessler hanging in the hallway is vandalized, Paul talks the cops into bringing in a shrink to give everyone in the house a sanity test. To determine if someone is crazy, the shrink asks his subject if others in the household are crazy. When it seems that the shrink’s penetrating questions are going nowhere, Mrs. Kessler is nabbed in the kitchen by the police as she’s raiding the fridge for a leg of chicken and brought into the library to confront her hubby. Upon seeing her, Charles goes into a trance and kicks into his zombie killing machine mode. By this time even the dumb cops know who the murderer is and the far-fetched film ends as dumbly as it began. For the viewer, there’s no mystery in who the killer is because Lugosi reveals himself as the killer in the opening scene. 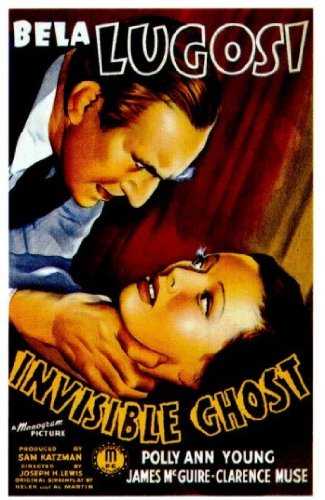