IN THE REALM OF THE SENSES (AI NO CORRIDA)

“The sex doesn’t seem to be gratuitous.”

“In the Realm of the Senses” is based on a sensationalized true incident taking place in the militaristic regime of 1936 Japan, where an ex-geisha wandered the streets of Tokyo while clutching the dismembered organ of her lover after some extremely passionate lovemaking. The film, an erotic masterpiece more than a classic masterpiece, has been banned on its release in Japan, America and Great Britain for its explicit sex. In Japan a court case took place in 1978 with Oshima having to defend his film for the sake of art as opposed to porn–he said it was made for women’s rights and their spokesperson was the character in the film called Sada.

This controversial film earned the director an international following, as the film eventually got shown in art-houses throughout the world and is now considered a classic. It’s a film from arguably Japan’s greatest living filmmaker, Nagisa Oshima (Death by Hanging/The Boy/Merry Christmas, Mr. Lawrence), and uses his ongoing themes of the outsider fighting against the restrictions imposed on them by society and their own personal taboos. It’s obviously not a film for everyone, but for those who share his message of the importance and the right of personal freedom over anything else. Oshima does justice in conveying this theme, no matter how far bent out of shape the dramatics are taken and of how little sense the film makes. The film by showing the actual intercourse and blow jobs — including a close-up of semen dripping from a woman’s lips, borders on the edge of pornography and art. But it is this shocking reality that gives power to its story and makes it possible for us as voyeurs, to see how unrestrained and passionate the love was between a married servant-whore, Sada (Eiko Matsuda), and her married businessman master, Kichi-zo (Tatsuya Fuji).

The “kind-hearted” and attractive Sada (Eiko Matsuda) is newly employed as a servant by brothel-keeper Toku (Aio Nakajima). This position is a matter of necessity for Sada because she must pay off her destitute husband’s debts.

Sada first gets aroused by her master when she is allowed to watch him fuck his wife. She meets again Toku’s lively husband Kichi-zo when she’s scrubbing the floors and he’s groping her. She finds that pleasurable, and the two begin an obsessive and self-destructive sexual relationship where they can’t stop fucking — even in the presence of others. Their relationship also pushes the sexual boundaries by breaking more taboos, as there is an element of self-destructiveness when they both declare their love forever no matter what. Sada makes Kichi-zo reverse gender roles and become the submissive lover, making him do anything to please her whims. There is a disturbed part to her that craves violence, as she makes her lover swear to never have sex with his wife again or she will kill him. The couple encourages the other servants to watch them make love, as they repeatedly make love with the servants there.

Kichi-zo also becomes possessed by the need to constantly have sex with her and finds that he’s jealous of her johns, even though the money they get gives them pleasure. He decides that he can’t live without her and thereby marries her. Their relationship now becomes one of equals. Whenever Sada wants sex, which is almost always, she demands and gets it. She is seen leading Kichi-zo around by his penis, such is her attachment to his private part. But things start to go wrong when Kichi-zo can’t resist going back to his first wife for sex, which the jealous Sada soon discovers. Eventually he consents to being strangled while having the ultimate in sexual fulfillment — dying in the saddle. Sada, with a butcher knife, detaches Kizicho’s penis and wanders around Tokyo with it for a few days until she is arrested. This makes her a folk hero in the eyes of certain women’s groups.

In this unique film violence ultimately blossoms in the sex act, as the lovers slowly change from being lighthearted about their continuous sex to becoming dangerously possessed by their compulsive desires. Sada wants to own his penis and he can’t separate himself from what she wants. In some of the graphic sex scenes food is placed and eaten in her vagina, she is made to sing while having intercourse atop of him, there is a brief lesbian sex scene, a young geisha is indoctrinated in sex by being forced to watch the sex act and then by having a dildo applied to her, and Sada only gets off with an elderly intellectual school-master client when she asks him to beat her hard. When she asks him to go away with her the teacher responds, that if others found out he was with her he would have to take his life. 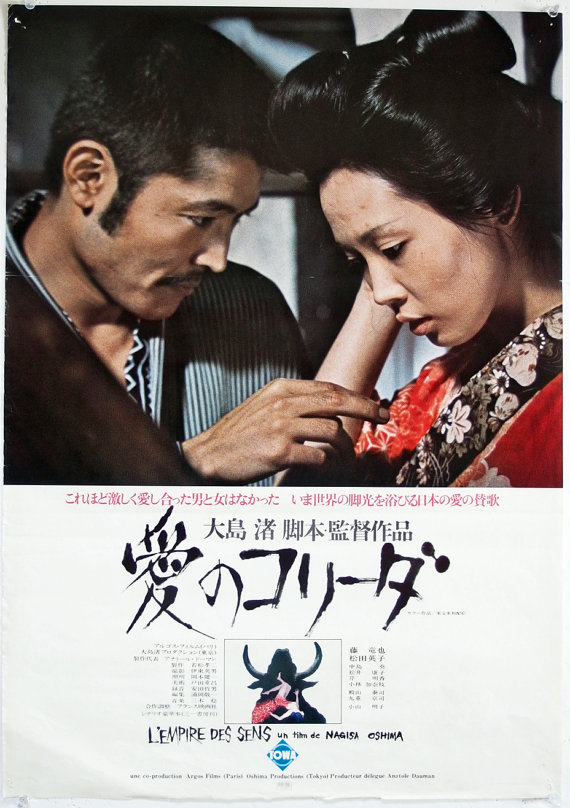