IN THE GOOD OLD SUMMERTIME

“Not as good as the original.”

Robert Z. Leonard’s uninspired Technicolor musical remake of Ernst Lubitsch’s 1940 comedy The Shop Around the Corner starring James Stewart and Margaret Sullavan. It’s pleasant enough but never totally satisfies (certainly not as good as the original). Most of the film takes place over the Christmas holiday, as its title is misleading. Its musical numbers are mostly forgettable, lacking any kind of summer heat. Judy Garland, a substitute for June Allyson who was busy shooting The Stratton Story, sings such tunes as “I Don’t Care,” “Merry Christmas,” “Wait Till the Sun Shines, Nellie” and “Meet Me Tonight in Dreamland.”

The film is set in the leisurely Chicago of 1906 and narrated by the Van Johnson character as he looks back with fondness to that romantic time period of his youth. Veronica Fisher (Judy Garland) and Andy Larkin (Van Johnson) are pen-pal correspondents who fall in love over their poetical letters but have never knowingly met. The joke is that they met at the post office when Andy bumps into her and messes up her summer outfit and being a gentleman he gives her his business address so he can pay her for damages incurred. She shows up at the music instrument store where he’s head salesman and instead of asking for money wants a job. He turns her down but she goes over his head to the boss Otto Oberkugen (S.Z. Sakall), who gives her a clerk job when she sells a harp that Andy says won’t sell. The two loathe each other but are both inspired to write even warmer love letters to their pen-pal to make up for their real life disappointments. Andy learns that his pen-pal is Miss Fisher when he spies her first at an arranged dinner date where she’s sitting alone at the table waiting for her late pen-pal, and Andy joins her without telling her the secret but pretends he accidentally chose that restaurant.

During a mix-up over Otto’s valuable Stradivarius, which is loaned without the owner’s permission to an aspiring violin student Louise, who stays at the same boarding house as Andy, Miss Fisher changes her opinion of him and sympathizes that he lost his job during the Christmas season trying to help out a very talented aspiring musician.

The other musical store employees include the cashier Nellie (Spring Byington), who goes out with the boss for the last 20 years but they have never married; Otto’s bumbling nephew and Andy’s best friend Hickey (Buster Keaton, once the star of MGM but now on a down-slide and given this inconsequential role, the last one he made for the studio), and the timid nice guy clerk Rudy Hansen (Clinton Sundberg). Liza Minnelli (Garland’s two and a half year old daughter) appears as the baby at the film’s end, she also appeared briefly in Easter Parade a year before.

Eventually all the mixups get cleared up and romance wins out as the pen-pals get together for real and marry in the summertime, as the film ends with the title song that began the film. 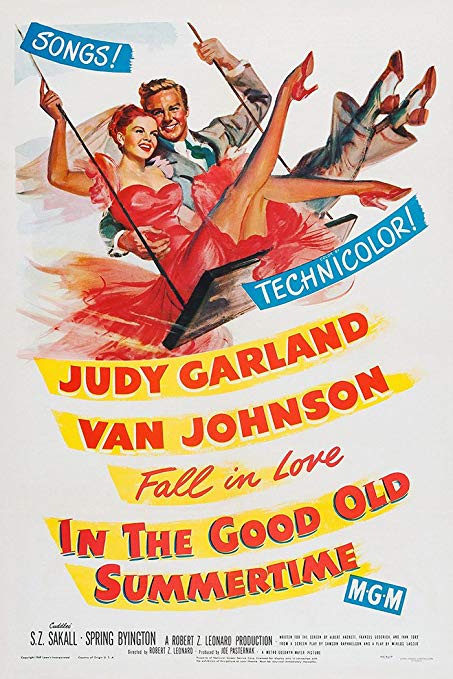 WILLIAM S. BURROUGHS: A MAN WITHIN

MAN WITHOUT A PAST, THE