IN THE COOL OF DAY

“Its tragic story aspires to Greek myth, but lands as soap opera.”

Robert Stevens (“The Big Caper”/”Never Love A Stranger”), a failure directing in movies but a success with TV, helms this grim romantic melodrama. Its tragic story aspires to Greek myth, but lands as soap opera. It’s based on the novel by Susan Ertz, and is written by Meade Roberts.Christine Bonner (Jane Fonda) is the terminally ill (living through two lung operations) beauty wed to the doting Sam Bonner (Arthur Hill), the son of the NYC publisher (Alexander Knox) of the Atlantic House. Murray Logan (Peter Finch) is the Brit editor for their publishing house. On a visit to NY he meets the fragile Christine. Meanwhile Sybil (Angela Lansbury) is Murray’s unhappy wife, who constantly blames him for her facial scar and that he caused the traffic accident that killed their son seven years ago. Both marriages are failures, except the over-protective Sam deeply loves his wife but can’t help himself from suffocating her. Sam envisions a vacation to Greece, with his good friend Murray, as he believes the change of scenery will be good for both couples. But at the last minute Sam must stay home to be with his dying father. While in Greece, a romance blooms between Christine and Murray. Sybil gets her revenge by informing Murray by letter and having a fling with a Brit salesman tourist (Nigel Davenport). Though the story is trite, at least we get a tour of Delphi. That’s about as good as things get. Nat King Cole sings the title song. It was written by Manos Hadjidakis. 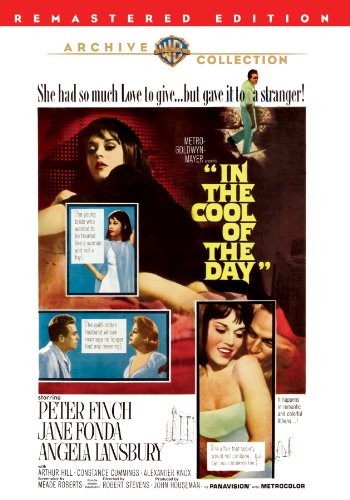