IN THE CITY OF SYLVIA (EN LA CIUDAD DE SYLVIA)

“It’s really quite beautiful and playful and mysterious, and in an unconventional way is a love letter to what seems lost but can still be recalled.“

Iconoclastic Catalan filmmaker José Luis Guerín(“Train of Shadows”/”En Construccion”/”Guest”) directs this enjoyable oddball voyeuristic film that hardly has any dialogue and is plotless, as it takes on the importance of a personal quest for a sensitive dreamer to recoup the lost past of things he fondly remembered (think Proust!). The film’s protagonist, a handsome young French speaking Lothario artist (Xavier Lafitte), visits Strasbourg and stays at a modest side-street hotel during the summer to see if he can locate a girl named Sylvia he met at a bar in this medieval city six years ago. The young artist searches the winding cobblestone back-streets of the quiet city and frequently passes a graffiti on a wall proclaiming “Laure – Je t’aime.” On his second day in town, the artist sits by himself in the afternoon at an outdoor cafe, by the conservatory Sylvia attended, drawing sketches of the pretty girls chatting with friends. After some time there, he spots a pretty girl (Pilar López de Ayala’) leaving the cafe he believes to be Sylvia. After following her for hours, he finally makes contact with her on a tram and is told he’s mistaken. She tells him he makes her uncomfortable stalking her, as she spotted him following her and went around in circles to avoid him. He profusely apologizes, and she gets off and politely tells him not to follow. The set-up references Hitchcock’s ‘Vertigo,’ with interesting recurring shots. It also includes some good atmospheric frames of everyday life. It’s really quite beautiful and playful and mysterious, and in an unconventional way is a love letter to what seems lost but can still be recalled. It’s a gentle, small film that probably has limited appeal to a wide audience, which is their loss. 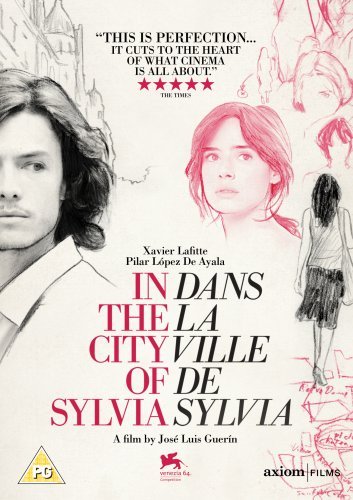