A bizarre madcap comedy that’s aided by a star-studded cast, but there’s more misses than hits in this vaudeville-like herky-jerky second-rate project. A. Edward Sutherland (“Mississippi”) directs and it’s written by Walter DeLeon and Francis Martin from a story by Neil Brant & Louis E. Heifetz.

At Shanghai, Tommy Nash (Stuart Erwin), who represents the American Electric company, finds the trains are not running because a bridge washed out and he must therefore take a 24-hour ride by car to Wu Hu to catch the demonstration of the radioscope by local Chinese inventor Dr. Wong (Edmund Breese) at the International House. Tommy’s suckered into giving the cajoling beautiful gold-digger Peggy Hopkins Joyce a ride, as she’s going there to land a millionaire. The eccentric wealthy pilot Henry Quail (W. C. Fields), a heavy drinker, takes off by plane (called a gyrocopter) from the States hoping to reach Kansas City but miscalculates and arrives in Wu Hu. He goes to the hotel by car, one that he keeps stored in the plane and he calls an autogyro. One of Ms. Joyce’s ex-husbands, the menacing General Nikolas Petronovich (Bela Lugosi), is staying at the International House and plans to buy the rights to the invention before the American rep can; he also doesn’t recognize the divorce. The General still believes he’s married to her according to the customs of his country, and threatens her with harm if she’s with another man.

There is a varied group of travelers invited to watch the demo and then bid afterwards on securing the rights. The harried hotel manager is played to perfection by Franklin Pangborn, the master of double-takes and someone who made an art form out of his usual “sissy” roles. The hotel’s house doctor is George Burns and Gracie Allen is his nurse. They do their usual dumb Gracie shtick, which I found annoying. Carol Fortescue (Sari Maritza) arrives with her father, a bidder on the invention. She’s Tommy’s on again/off again fiancée, who is disgusted with him because he left her twice at the altar after coming down with childhood diseases. When they meet again at the hotel, Tommy assures her he’s cured because he saw the best specialists and they guaranteed he would never again contact a childhood disease. This reassures her to accept his proposal again. When Tommy comes down with a benign rash, mistaken for the measles, the General gets wind of it and contacts the local health inspector who has the International House quarantined.

During a demo of the invention–the showing of live television by fine tuning–we catch Baby Rose Marie, Rudy Vallee, Sterling Holloway, and a weird Cab Calloway number of him singing “Reefer Man.” In all the ensuing chaos, the film shoots for comedy rather than to keep the story plausible. If only it were funnier. One funny scene had Lugosi trying to kill Fields, who was stuck in the quarantined hotel with Ms. Joyce and ended up sharing a bedroom with her. Since Lugosi was locked out, he became so overcome with jealousy and angered that he tried to kill Fields. The hilarious sight of horror legend Lugosi trying to murder comedy legend Fields is hard to top.

The film’s most memorable line has the drunken and blustery Fields ask the prissy hotel manager, Franklin Pangborn, the name of the town, who says Wu Hu, whereupon Fields throws away the flower in his buttonhole, muttering, “Don’t let the posy fool you!” 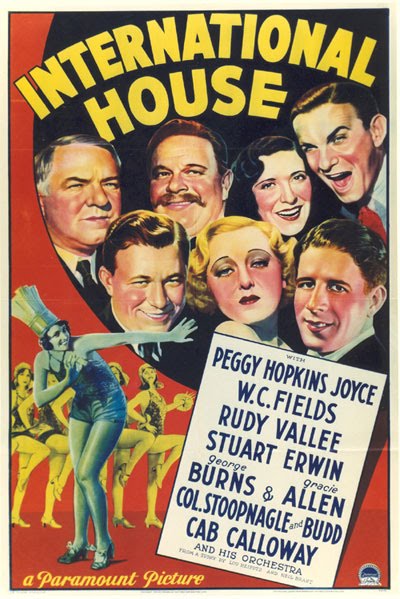