“Makes its mark as an action pic with its elaborate set-pieces.”

For pop culture German director Tom Tykwer (“Perfume”/”Run Lola Run”/”Heaven”) and the rookie writer Eric Warren Singer to fortuitously make the bank the arch villain in this globe-trotting cloak-and-dagger thriller about the mess the modern world is in, couldn’t be a more topical and fitting choice after the recent banking scandals in America caused a free-fall on the economy and made the financial markets seem untrustworthy to a large percentage of the public. It’s only too bad they couldn’t take advantage of that plot luck and make a good avarice banker bashing movie, as their thriller is just decent and not compelling or dazzling. Also, it comes with an unmerited ending that has the forces of good triumphing over the forces of evil (something that might be more wishful thinking than what’s actually happening in the real world).

We’re told by one of the shifty villains that the international bank’s mantra is “whoever controls the debt, controls everything.” We soon learn that these dirty dealing bankers are eager to finance an arms deal or a revolution or just about make any deal whether legit or not that gives them leverage. In other words, we are led to believe that these vile bankers are willing to do anything for money and power (as if that’s a novel idea!).

The world’s most powerful banks have become hopelessly corrupt, which prompts the earnest, brooding and obsessive unshaven and haggard looking Interpol agent Louis Salinger (Clive Owen), a gung-ho ex-Scotland Yard agent, and his kindred spirit, the dedicated straight-arrow family orientated golden girl Manhattan assistant district attorney Eleanor Whitman (Naomi Watts), to team up and follow a dangerous money trail from Berlin to Milan to New York and Istanbul (there are also a few other stopovers in Lyon and Luxembourg) even though their bosses disapprove of their zealous approach to searching for truth and justice and want to rein them in.

The fictitious iniquitous banking corporation is called IBBC (International Bank of Business and Credit) and the international bank’s headquarters is in Luxembourg, where it’s run by the urbane wheeler-dealer Scandinavian named Jonas Skarssen (Ulrich Thomsen)–the film’s top heavy. He is able to bribe or frighten off any law enforcement officers who dare to investigate his long list of criminal misdeeds.

When Skarssen’s unseen hit man in the opening scene knocks off Salinger’s Interpol colleague Schumer on the crowded streets outside a Berlin railway station with a poison dart and then arranges for the murder of the cautious banking executive, André Clement, who was to be a whistle-blower for Schumer but has a car accident in Luxembourg, the loyal Salinger vows to bring to justice the one who ordered the hit.

The film makes its mark as an action pic with its elaborate set-pieces that range from the execution by a high-powered rifle of an Italian defense contractor (Luca Giorgio Barbareschi) running for president, while he’s talking at a crowded political rally in Milan. The bank’s fingerprints all over the rub-out. Then there’s the even more eleborate shoot-out in Manhattan’s Guggenheim Museum, the film’s centerpiece and best reason for seeing the film. It turns Frank Lloyd Wright’s architectural wonder of a six-story spiral building into a bloody shooting-gallery, as Salinger tries to protect the contract bank hit man (Brian F. O’Byrne) from being executed by the heavily-armed army of goons sent by the bank to rid themselves of an employee they don’t want questioned by the police (the museum was a convincing replica built on a German soundstage). And finally, the climactic showdown between Skarssen and Salinger at an Istanbul cemetery that leaves us with a few quiet shootings to sate our appetite for revenge.

For those who like watching a top character actor in action, even if he’s forced to say the drivel provided by the script, there’s the always brilliant Armin Mueller-Stahl. Here he plays an elderly, cynical, and world-weary Colonel Wilhelm Wexler, one of the banker’s top henchmen and chief security officer and handler of the hit man. Wexler was a former hardline Commie and a former Stasi agent. When the game is up for him, Wexler seeks redemption for selling his soul to the capitalists by wearing a wire for Salinger in his meeting with Skarssen over an impending arms deal over missiles heading to the Middle East that plays rivals Israel and Syria off against each other.

The talented Watts was underutilized in a part that gave her little to do but look warmly at Owen from time to time. While Owen as the idealistic loner cop (a youthful version of the Armin Mueller-Stahl character when he was also an uncompromising idealist) in the rumpled raincoat with occasional anger-management problems over his impotence to get the banker bad guys, is a forgettable part done many times before and with more pep and panache. The same could be said for the film about the future that’s unfortunately written from the past, that succeeds only because of its effective well-staged action sequences but lacks passion to be convincing or heartfelt in its quest for the truth (but at least I learned the film’s truth: all bankers are evil), is filled with clunky dialogue (i.e.; one of the shifty banker villains says “Death comes for us all.”), the plot is implausible, it lacks the wit and depth to be a top-flight thinking-man’s thriller, and it fails in its attempts to clear things up about the world mess or what is banking’s part in it (which I thought that was supposed to be what it was about).

The banking story takes its cues from the 1991 scandal surrounding the Pakistani-run Bank of Credit and Commerce International, which turned out to be one of the biggest Ponzi schemes that had been operating since the 1970s; that is, until the recent Madoff one. 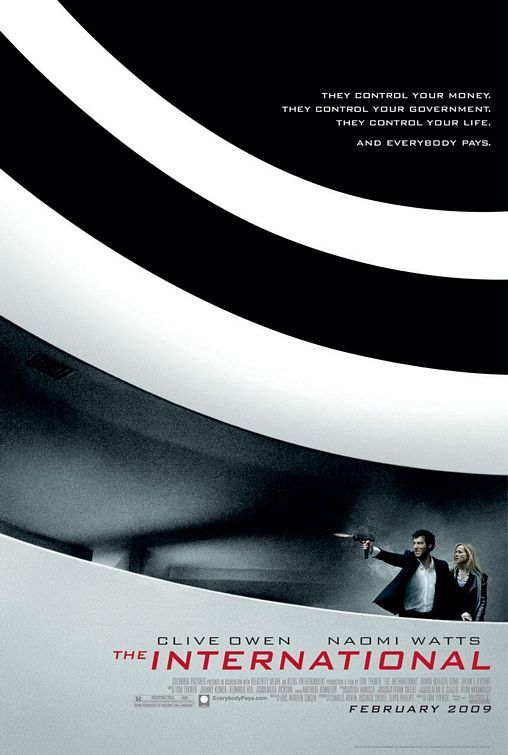