“It is a noble idea for a film to satire some of the best known American pop culture heroes of the 1950s.”

It is a noble idea for a film to satire some of the best known American pop culture heroes of the 1950s. It’s directed and written by the Britisher Nicolas Roeg, adapted from a Terry Johnson play conceived in 1982. In 1954, the filmmaker fantasizes what would have happened if Marilyn Monroe (Theresa Russell), Albert Einstein (Michael Emil), Joe DiMaggio (Gary Busey), and Senator Joseph McCarthy (Tony Curtis) met in a hotel room in New York City on one blistering hot day. The film often misses the target but since it throws everything into the mix, it sometimes is delightfully on target providing both amusement and thought-provoking reactions.

The fictionalized encounters capture the essence of the pop culture characters rather than depicting them as real-life characters, though using what knowledge the public has of them allows the characterizations to be pretty close to the truth. It shows the icons were concerned about the following topics: fame, vanity, communism vs. democracy, world peace, jealousy, Freud, love, The Theory of Relativity, the physical appearance of the universe, the A-bomb, hatred, and freedom of speech.

What really makes this film work, are the excellent performances by the stars. Michael Emil makes for a fine childlike genius, wearing a sweatshirt with the block letter P for Princeton emblazoned on it. He sits in the hotel room late at night working on his Field Theory when who should pop in, but Marilyn Monroe looking for an intelligent conversation. She has just finished shooting her famous scene from The Seven Year Itch, where a wind gush under a NYC subway grating blows her skirt up and one can see her panties. Marilyn is the life of the film presenting a sexy and engaging sex goddess, who is both vulnerable and pushy.

The genius and the sexpot sit and talk about The Theory of Relativity, which Marilyn accurately explains by a demonstration of toys and a flashlight on the floor. She then says she learned it without understanding it. Einstein is upset by that, mentioning that knowledge isn’t something that is true–it’s just an agreement made by people that makes it seem true. He says that real knowledge comes about by turning over possibilities, which is the method of thinking about things.

Gary Busey is the chain-smoking Yankee Clipper who can’t understand his starlet wife and her psychological problems that revolve around her insecurities and the hatred of her step-mother, but is jealously in love with her. He comes at 3 a.m. banging on the professor’s hotel room door, expecting his wife to be there. She has not been with him for the last two weeks, as she was having another extra-marital affair. He is portrayed as a buffoon who is self-absorbed with his fame and baseball achievements, with the running gag being that he is someone who loves collecting bubble gum baseball cards of himself. Marilyn calls him stupid, complaining she never had an intelligent conversation with him. Somehow Emil, Busey, and Theresa survive the night, with Emil voluntarily leaving his room for another in the hotel to placate the jealous baseball slugger.

For my money, the best scene in the film was in the brief contact between Will Samson, the proud Cherokee elevator attendant, who is taking Einstein to a room on a different floor to escape from Marilyn and Joe. When Einstein tells him that the Indians believe that wherever they stand is the center of the universe, Samson responds that he just eats hot dogs and goes up and down all day in the elevator; and, an interesting conversation develops, with the Indian suggesting that Einstein is really a Cherokee because of his views.

The most terrifying carrier of world gloom is Tony Curtis, as the witch hunting junior senator from Wisconsin, Joseph McCarthy. He’s in Einstein’s room to subpoena him to testify before his House of Un-American Committee and is shown as a repressed Catholic, a hypocrite, a boozer, an anti-Semite, a paranoid nut who is hell-bent through his powers in the senate to head a committee that sniffs out people he doesn’t feel comfortable about by naming them as commies and thereby ruining their careers.

Einstein challenges the senator’s authority and says he will go to his World Peace conference and will not testify before the senator’s committee.

The film is a bit of a mess, with no certain plot and it seems to have no particular aim it hopes to accomplish. But as a diverting look at these fantasies of the four 1950 icons, it makes for provocative theater and in the process, it sometimes offers us some inspired thoughts. It sort of sucks you along for its ride and you don’t mind going along because its kind of fun to imagine how those characters really were. The film’s efforts might be comparable to a guy fantasizing how it would be to sleep with Marilyn Monroe. 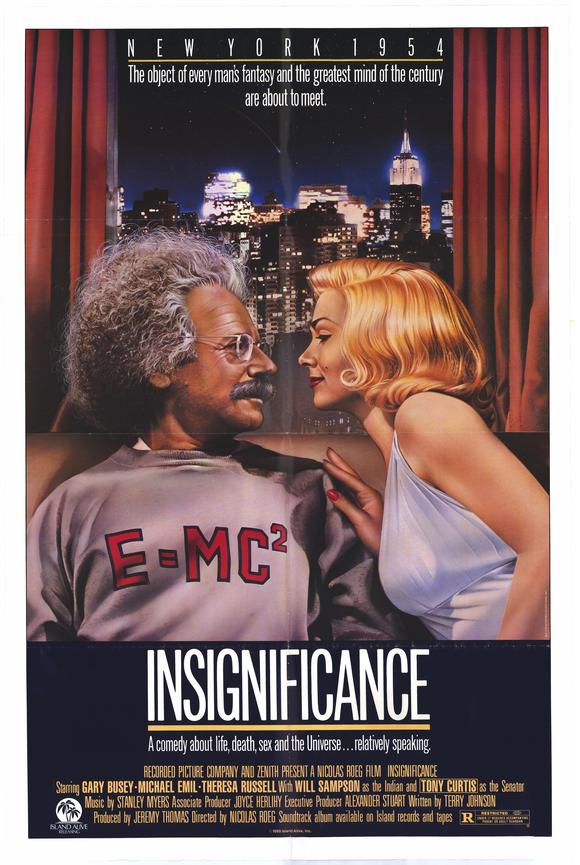