“Reflects on many significant social concerns including the exploitation of women, how cruel people can be and the effects of westernization on Japan.”

Shohei Imamura (“The Eel”/”The Pornographers”/”Black Rain”) directs and cowrites (with Keiji Hasebe) this hardhitting bitter black comedy/drama, set in the rural mountain farming country of Japan, that reflects on many significant social concerns including the exploitation of women, how cruel people can be, and the effects of westernization on Japan. It tells of the hard life of Tome Matsuki (Sachiko Hidari), someone who doesn’t know her real mother or father, whose struggle for survival is compared to an ant. It begins in 1918 and covers 45 years of Tome’s hard-pressed existence, a time both she and the country undergo profound changes.

The story picks up steam when Tome’s 20 and her child-like hardworking farmer foster dad Chuji (Kazuo Kitamura) has kept her all this time as his mistress. Chuji dwells with his superstitious common-law wife En (Sumie Sasaki), who mocks the morally ignorant Tome for sleeping with her stepfather. Tome goes out into the cold world in an isolationist Japan to first work for her indentured landlord farmer Honda (Shigeru Tsuyuguchi) and then works in a mill as a single woman who is pregnant as a result of an affair with a neighboring farmer. At the factory, during the postwar reconstruction period, Tome has a casual affair with the ambitious career-minded foreman (Taiji Tonoyama) and then leaves the job because her other bosses are not pleased with her union organizing and she becomes a housemaid for the mistress of an American soldier. When the woman’s half-caste child gets scalded to death because of her neglect, Tome is deeply sorry. She then moves to the big city to become a prostitute during the postwar economic depression and advances to becoming a madame during the 1950s, even spitefully hiring the girl who was the American soldier’s mistress. In the 1960s, as Japan has lost many of its traditions and followed America’s materialistic path, Tome falls for the opportunistic merchant named Karasawa (Seizaburô Kawazu), but gets turned off when he asks her to screw a client. When she’s released from prison on prostitution charges Tome returns to Tokyo and catches up with her estranged daughter Nobuko (Jitsuko Yoshimura), now grown and pregnant without being married–evidently following in mom’s footsteps. Nobuko sleeps with Karasawa and robs him. The weary and elderly Tome tracks her daughter down in the country, where she’s living with her lover and brings her back to Tokyo to face Karasawa.

The personal problems of Tome are related to Japan’s problems in the modern world and of the humiliation of losing the war and becoming dependent on America to get back on its feet. It’s stunningly photographed in black and white and is greatly enhanced by its location shots giving it an air of authenticity, but is less effective in closing many scenes in gimmicky freeze-frames (showing its anti-Ozu bent, even though Imamura began as a studio apprentice with Yasujiro Ozu). It’s an ambitious film that has a great performance from Sachiko Hidari, who realistically looks like she’s aged 45 years. The hard to categorize auteur, Imamura, presents another of his influential pics on modern Japan, that offers a unique look at his country that is critical of the loss of its cultural values. It won 14 major film awards and was well-received in Japan. 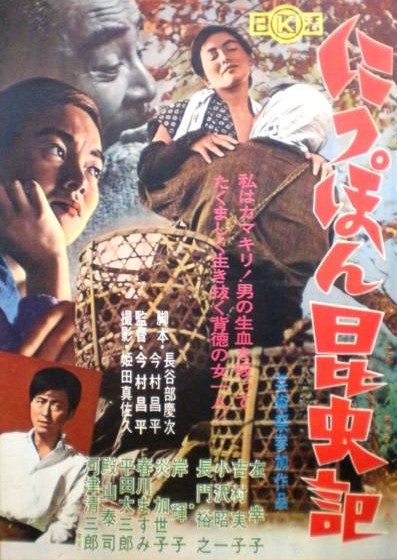