The first major sound Western is an historically important one, but as a film it’s lifeless; though a sensation when released because of its novel but primitive sound (Fox’ early Movietone recording system), today it’s viewed as too talky and has too little action. It served as the first of the Cisco talkies, in the long running series. Raoul Walsh is listed as codirector with Irving Cummings, but it’s likely Walsh had little to do with the directing chores. Walsh lost an eye when a jackrabbit went through the windshield of his car, as a piece of shattered glass went into his eye. This was the reason for the eye patch he wore the rest of his life. As a result Walsh had to give up the starring part in the feature and was replaced by the usually staid silent screen star Warner Baxter. He made the most of it and went on to win an Oscar for Best Actor in 1929. Warner did nothing special, but his comical Mexican accent as the “charming” bandit pleased both critics and viewers.

The film offered sound for its location shots, as microphones were hidden under sagebrush or behind rocks. It caught the fancy of the audience by picking up the incidental sound of riders conversing on a stagecoach, hoofbeats and gunshots. The film is noted for its naturalistic sound, with the sizzling of bacon in a frying pan as the most quoted example. But that scene is actually not in the film: it was ham and eggs.

The Western had a winsome theme song titled My Tonia, which was played in the dark before the credits that begin and end the film. The song was written by Fox studio’s Lew Brown, B.G. DeSylva and Ray Henderson.

It’s set in the days of President McKinley. The Cisco Kid (Warner Baxter) is made out to be the Robin Hood of the southwest, though this noble characteristic is never convincingly carried off in a credible way. He comes off mostly as a pompous stereotypical “Latin lover,” a mannerly common thief who is out only for Numero Uno but who talks a good game like he’s for the workingman.

In the opening scene, Cisco robs at gunpoint the stagecoach of its Wells Fargo box full of money but doesn’t rob the passengers–keeping his image intact as the gentleman bandit. Later when he learns an Italian barber (Henry Armetta) lost $87 in the robbery, he returns the money to him. The Kid is a romantic, who loves his impoverished feisty Mexican girlfriend Tonia Maria (Dorothy Burgess) and is always giving her gifts and promising her a better life. What he doesn’t know, is that she runs around with other men when he’s away.

Mickey Dunn (Edmund Lowe) is an arrogant, tough, womanizing U.S. Army sergeant from Brooklyn, who is assigned by the colonel to take a squad and hunt down The Kid. Soon the chump-like Mickey gets romantically entangled with Tonia, and a menage a trois develops. The greedy and untrustworthy Tonia makes a deal with Mickey to collect the $5,000 reward money if she gives up the Kid. The Kid gets wind of her scheme and executes his own plan, as he has a trick up his sleeve to take care of someone out to do him harm.

The three main characters are all unpleasant egotistical types, who are motivated by selfish reasons but pretend they care about others. This, along with how tedious it is, makes it only seem like a necessary film for cinephiles, techie freaks and whoever else is interested in such a museum piece. 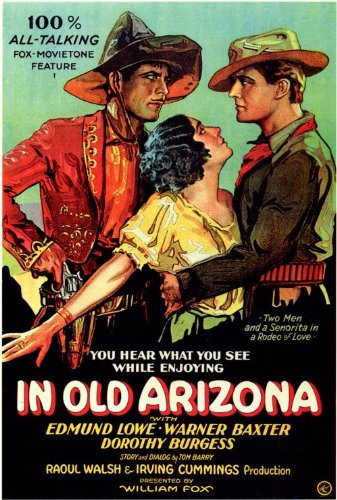