André De Toth’s (“Day of the Outlaw “) The Indian Fighter — starring and produced by Kirk Douglas (the first film assembled by Douglas’ own Bryna Productions) — is a high-minded depiction of the relations between whites and Native Americans. It depicts the good and bad as well as the tragic mistakes in judgment by participants on both sides, yet even at its most optimistic moments offers only a grim reminder of how fragile is the peace. De Toth’s film is based on a story by Ben Kadish and co-scripted by Frank Davis and Ben Hecht. Unfortunately the screenplay lacks intensity throughout, as the pivotal focus on Indian-white relations is diverted by an uninteresting lustful romance between Douglas and Elsa Martinelli playing the Indian chief’s sexy daughter. Also, the action scenes suffered from a flatness and seemed swallowed up by the sumptuousness of the ‘Scope photography.

John Wayne’s Hondo and James Stewart’s Broken Arrow covered the same themes, and did it in a more convincing and superior way. Douglas’s film takes a more left-of-center political approach in making its points about settling the Old West, but the problem is not in its politics as much as how awkward its key scenes turned out and how little affect they had in showing a sincere rapprochement between the races. The film might be best remembered for Martinelli’s nude bathing scene, introducing nudity for the first time to the western genre. But on a more positive note, it also should be remembered for the way it depicted the Sioux Indians and their harmony with nature.

Johnny Hawks (Kirk Douglas) is a brash trail guide, with a revered reputation as an Indian fighter, who agrees to lead a wagon train through Sioux Territory to reach Oregon. Before joining the wagon train waiting at the fort, Hawks powwows with his former Indian rivals, Chief Red Cloud (Eduard Franz) and his truculent son Grey Wolf (Harry Landers). He learns that Grey Wolf plans to torch to death a white trader Wes Todd (Walter Matthau) because he traded whiskey for information on where there’s gold on the Indian land and when the trade went bad his partner Chivington (Lon Chaney, Jr.) killed one of the Indians and escaped. Hawks manages in his brief stay to win a fight with Grey Wolf to take Todd back to Captain Trask at the fort and receive American justice, and also to talk Red Cloud into signing a peace treaty with the army the next day. While catching the Indian maid Onahti (Martinelli) frolicking around in a mountain stream without any clothes, he finds time to woo her when not discussing business with the chief.

Hawks’ actions temporarily avert a war, and he precedes onward to Oregon with the wagon train. The wagon train widow with a young son, Susan Rogers (Diana Douglas, Kirk’s first ex-wife and mother of Michael), is so overwhelmed by the Indian fighter that she tries to rope him into marriage and become an Oregon farmer. Hawks prefers the rough love of his Indian girl and irresponsibly diverts the wagon train out of its way just to sleep with Onahti before leaving the Sioux Territory. This leads to a breaking of the peace, as the friendly Indians trade peacefully with the nearby wagon train but Todd and Chivington ply Crazy Bear with liquor to find out where’s the gold. This time when things go wrong, Grey Wolf is killed by the greedy traders and this leads Red Cloud to go on the warpath.

It’s hardly a fresh story and the scene of getting the Indian drunk was difficult to watch because it was so clumsily scripted, but Douglas is robust and the western moves briskly along with the predictable set-piece battle taking place as the Indians attack the outnumbered fort. As expected, Douglas makes amends for deserting his post and neglecting his duty by arranging for a more lasting peace treaty this time due to his heroic action. 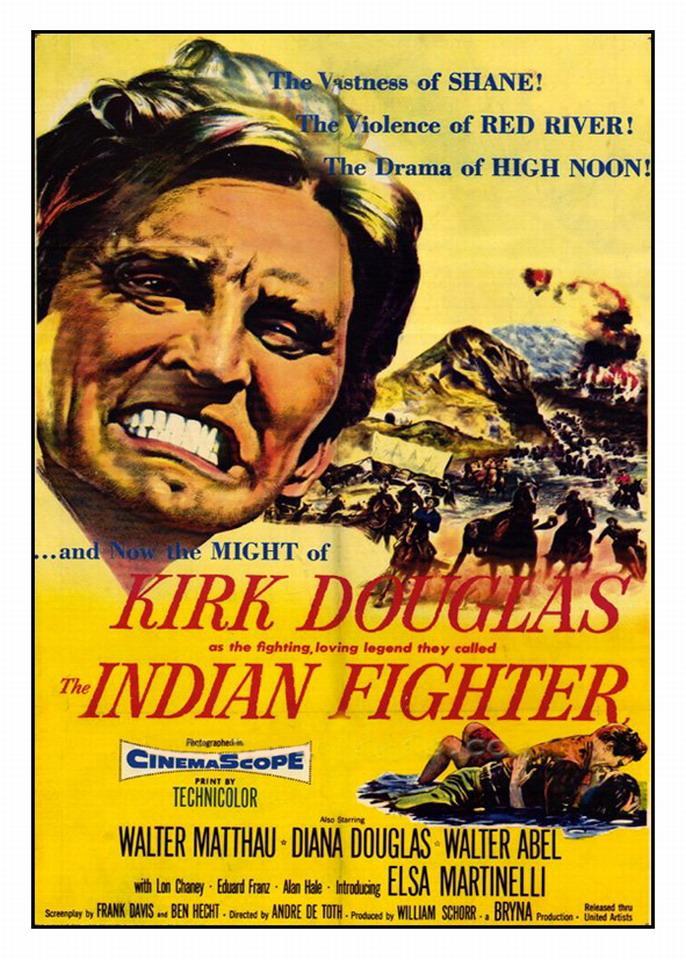